View from the Sidelines: July 31st at Steelers Training Camp

Share All sharing options for: View from the Sidelines: July 31st at Steelers Training Camp

Have you ever been to Steelers Training Camp at Saint Vincent College in Latrobe and sat in the bleachers or on the lawn to watch your favorite players? If so, you have probably seen some fans who get to stand right on the sidelines, watching the action from up close. And if you are anything like me, you were both jealous and angry at how close these fans got to be to the players and coaches, watching their every move. Well, on a beautiful Sunday afternoon to end July, I got to be one of those fans.

As some of you may know, I am a student at Saint Vincent College and work on campus this summer. And believe it or not, using the summer to work rather than relax actually paid off. I was awarded a special opportunity to work the registration desk for Steelers VIP Day. My pay? Two free tickets to the event itself! As diehard Steelers fans, my fiancee and I just couldn't say no. This post chronicles my experience at the event, which I won't soon forget. For those of you interested in what exactly went down on the field, I will even add some observations that I had during this first 2011 Steelers practice in pads! Read the entire story after the jump.

I will spare you my riveting experience of checking in fellow Steelers fans. So when my work was done, the fun began. At approximately 2:15, about 100 fans were led to a conference room in the Fred Rogers Center on campus, where someone from the Steelers marketing department introduced us to the schedule of the day and Father Paul Taylor of the St. Vincent Archabbey welcomed the guests. Afterwards, we were shown a highlight film of the 2010 Pittsburgh Steeler season produced by NFL Films, which was fun all the way through - until, of course, the end. Highlights like the Beard's 79 yard Interception Return TD against the Bucs and the Hair's Interception TD vs the Bengals were met with applause. But the loudest cheer, the play of the Season, was Rex Ryan's epic headset throw-down after Ben's game-winning first down in the AFC championship game. The man is hated here!

The highlight film was over quickly, though most of us could have dealt with skipping the last 5 minutes or, even better, erasing it from our memories. Either way, we were led down to the practice field at 3:00. And indeed, after a bag check and the assurance that we couldn't sit or drink water on the field during practice on a 90 degree day without a cloud in the sky, I stood right there, on Chuck Noll Field, watching my Steelers warm up right in front of me! My few notes from the practice itself follow:

So much for my practice observations. Unfortunately, every VIP fan on the sidelines was kicked off the field and let back into the Rogers Center at about 4:50, while the Steelers were still holding their scrimmage. "Don't worry," we were assured, "practice is done soon anyways." Back in the Rogers Center, the fans were promised autographs by two Steelers. While waiting in line, I casually checked my Twitter feed - and what do you know? The players are still out there, practicing their hearts out, until about 5:35. I sure didn't feel like a VIP having to read highlights from scrimmage over my Twitter feed for 45 minutes, while I could have been out there.
In the end though, the wait was worth it as both McFadden and Antonio Brown were gracious enough to come down and sign autographs for all of the approximately 100 fans right after practice, before their dinner. And speaking of dinner, our night also ended in style when we got served a hot dinner consisting of Hamburgers, Hot Dogs, Corn on the Cob, Grilled Chicken, and other deliciousness. Just like that, the VIP feeling was back. What a great day! Following are just a few pictures that I took while enjoying practice from my view from the sidelines. Excuse the quality, my cell phone hasn't learned yet that you need more than 4 megapixel to zoom in.
Watching a recap of the 2010 season on two big screens 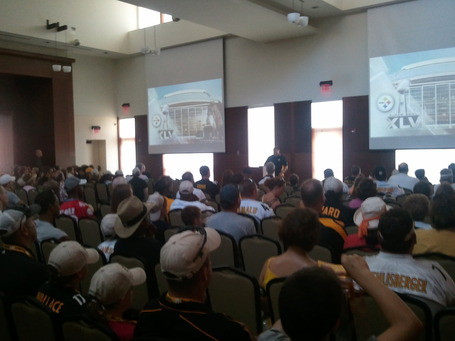 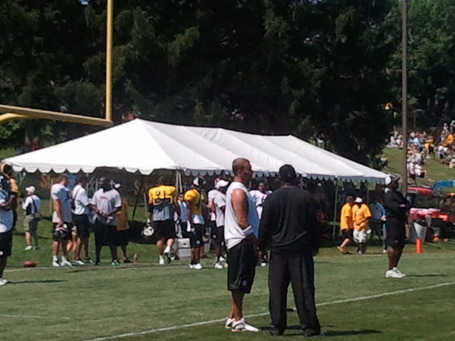 The Running Backs warm up together 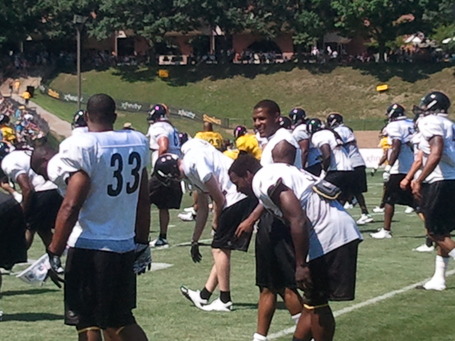 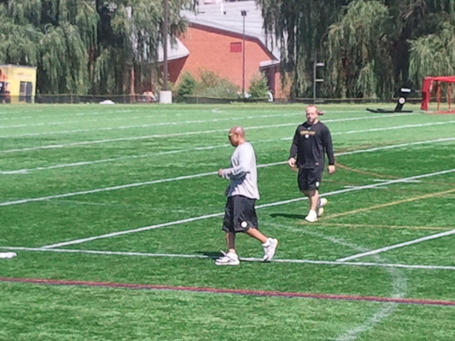 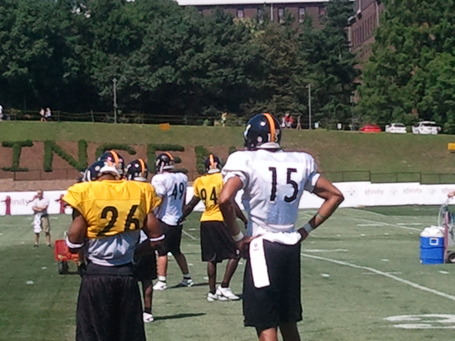 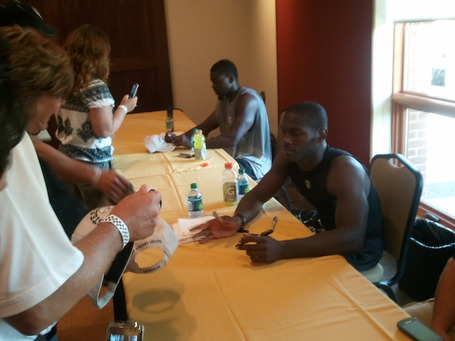