Last fall I attended the Steelers Ladies Night Out. [If you are seriously bored at work or otherwise at loose ends you can find my article here.] When John Simpson, the Marketing Events Manager for the Steelers, told us that there was also a Women's Training Camp in the summer, I immediately decided that I would go.

Thus it was that I found myself driving to the north side of Pittsburgh a few Saturdays ago, equipped with two water bottles, sunscreen, and an awesome Steelers hat. (Well, and shorts and a Steelers t-shirt as well. It wasn't that sort of camp...) I admit that I was pretty nervous. When I attended Ladies Night Out I was surrounded by a group of no-nonsense women that I would be happy to have with me if I had to walk down a dark alley. I assumed that a similar group of women would be attending the training camp, and wondered whether we would be expected to, say, tackle each other. I thought I might come out the loser from such a contest. But as soon as I entered the gates at Heinz Field I saw to my relief that all ages, conditioning levels and so on were represented. The youngest participant I saw was around 16; the oldest was probably 5 times that old. You do the math... 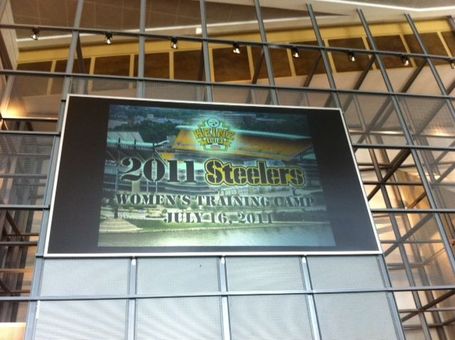 After I registered I headed for a large room overlooking downtown Pittsburgh where we were served a continental breakfast. After the capacity crowd of something over 300 women were settled and breakfasted, we were treated to a viewing of the official video from last season. We were only the second group to see this, according to John Simpson. The first group was the guys at the Men's Fantasy Football Camp, who saw it in June. (One of the women at my table whose husband was at the men's camp said that we probably got a lot more out of it than they did - apparently the guys are in pretty rough shape by the time they've stayed up most of the night partying.) It was an awesome video, although we had to avert our eyes during the Super Bowl segment, as it was a bit too painful.

We were then sent out to Heinz Field. Yes, Heinz Field. We were the first (and probably the last) group of women to have our training camp at Heinz Field. I think that this had something to do with the lockout, which was still in effect, but I'm not sure what. At any rate, first we spent about 15 minutes doing warm-ups with the strength and conditioning coach. He took us through a number of stretches, and then we did a couple of drills that looked as if they were dreamed up by the Ministry of Funny Walks. We finished up with the infamous carioca drill, and then were divided into four groups according to the color of wristband we had been issued at registration.

My wristband was a tasteful black, and therefore I headed to Mike Wagner's station. After giving us a brief explanation of the difference between zone and man defense Mike lined us up and showed us what we were to do in either case. We queued up in six lines and took turns being receivers and defenders. The quarterback (a former backup, I believe - I never caught his name) signaled which of 3 routes the receivers would run while Mike told the defenders whether to line up for zone or man. On a signal the receivers would take off and the QB would throw a ball to one of them. We weren't great at catching the ball, but I have to say we were far worse at defending it. It gave me an entirely new respect for the defensive backfield, I can tell you that.

After 45 minutes we went to the next station, which was manned by Randy Grossman. Randy taught us some of the subtleties of route-running, including various sorts of patterns, and we had a go at each type. He also explained some behind-the-scenes stuff. For example, he said that although a receiver will almost always blame the QB when a ball is uncatchable, he claims that 85 – 90% of the time it means that the receiver ran a bad route. Randy was pretty strict with us, and would chastise us if we didn't pivot sharply enough, explaining that this gave the defender an extra split second to adjust, making it more difficult to get open. We also tried some go routes where we had to adjust to a ball thrown too far to the right or left. It required taking our eyes off the ball, pelting along in what we thought would be the correct direction, finding the ball again, and catching it. We were especially terrible at this. I think only a few women in my group of about 75 managed to successfully adjust without slowing down or stopping, find the ball again, and catch it. I won't tell you how much I missed by. Let's just say that none of the assistants from the Pittsburgh Passion (the women's football team owned in part by Lynn Swann) suggested that I try out. 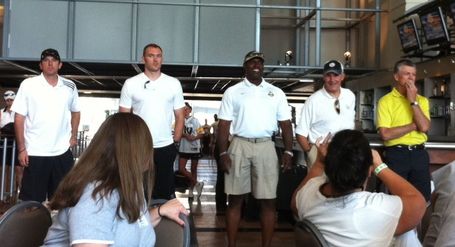 Again the horn blew and we moved on to the next station, where we were sub-divided into two groups. I was in the first group, and we spent about 20 minutes with Josh Miller learning how to punt. The explanation, including a demonstration of the correct technique, took about a minute, and the remaining time was spent trying it. It is harder than it looks. Other than that remark I will draw a veil over the experience. (To be fair, my first attempt was halfway respectable – however, the remaining 5 or 6 tries got increasingly bad. Don't ask me why. At least none of mine actually went backwards, which was not universally true.) We then switched with the other group and spent the next 20 minutes with Justin Hartwig. He taught us how to snap the ball from center, and we took turns snapping or being snapped to. The "QB" of the pair then threw the ball while the "center" turned into a receiver and ran out to catch it. (By this point we'd been in the hot sun for about 2 hours, and so possibly the word "ran" is a slight exaggeration. "Trotted" might be closer to the mark, or even "ambled" in some cases.)

The final station was with Craig Bingham, and we did a number of defensive line drills and learned to tackle. The assistants from the Pittsburgh Passion exhorted us to tackle a lot more whole-heartedly than most of us were naturally inclined to do. Fortunately we weren't tackling each other but a dummy. However, if you really wrapped it up properly you went down with the ship. One of my groupmates suggested that it would help if the dummy had a padded cut-out for your face, and possibly some aromatherapy oils infusing the padding. Maybe next year...

We were then treated to a large and toothsome lunch, which included something I have never eaten before – pierogie lasagna. Pierogie lasagna is a lot better than it sounds – actually it was delicious. After lunch we could get our picture taken with a Lombardi trophy, get an autograph from one of the Steelers alumni that had been our instructors in the morning, and get a tour of Heinz Field. Alas, my schedule dictated that I head out and catch up on some work – the same work that has been preventing my participation lately in this esteemed community. But I just had to take the time to tell yinz (or is it yunz?) about this experience, and encourage any of my Steeler fan sisters to sign up next year if you've never done it. There were women from all over the place there. At my table were 2 women from North Carolina (they married a pair of brothers who grew up in Pittsburgh,) one from Florida, and one from Colorado. There were also women in attendance from California, Canada, and other far-flung and exotic locations. (Well, okay, Canada isn't exactly exotic. California, maybe.) It was a blast, and what's more, when I attend Steelers training camp next week I'll have a much better idea of what I'm seeing. I'll let you all know if anybody is skimping on their skipping, bobbling their blocking, or wrecking their routes. I might possibly even be able to tell whether or not it's Ben's fault when the receivers miss the ball : )