Ray Horton Leaves Pittsburgh, But He Still Has the Heart of a Steeler

Share All sharing options for: Ray Horton Leaves Pittsburgh, But He Still Has the Heart of a Steeler 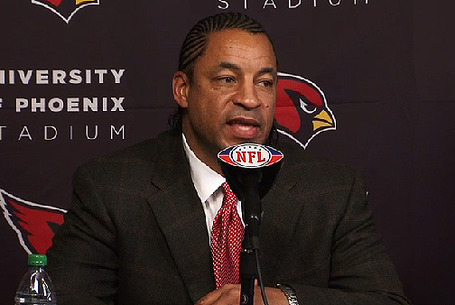 There is a fantastic article in the Maple Street Press Steelers Annual, "Nothing Better Than Being a Steeler." It was written by Mike Silverstein (who we all know and love as Homer J.) and details how "The Steelers continue to defy modern stereotypes and standards with their family-like organization." I highly recommend giving it a read.

A small item in last week's Post-Gazette that seems to have gone unnoticed on this august site provides a lovely exclamation mark to Homer's - er, I mean Mike's - article. It can be found here. The upshot of the article is that when Horton stopped by the Steelers' facility to say his goodbyes before heading to Pittsburgh West, he took the opportunity to score a ride to the airport from one of the cafeteria workers that he was friendly with, and even cadged $20 off of him.

It was a pretty good deal for "Mo" Matthews, a long-time Steelers employee, as it turned out. Horton provided the vehicle in which to transport him - Horton's red 1999 Mercedes SL500 convertible roadster, which Matthews had long admired. Horton also handed over the title and other paperwork for the car in exchange for the $20.

"I'm still in shock," Matthews said. "I don't think it has hit me yet. I still pinch myself. I look out the window when I bring it to work and I just go, 'Man, that's mine.'

"People ask me what's it need, and I tell them it doesn't need anything. All it needs is a driver."

At a time when we're poised for football to finally begin, I wanted to take a moment to honor one of the things I love the most about the Steelers, and to make sure that BTSCers knew about this great story. I wish Ray Horton all the best - except when the Cards are playing the Steelers, naturally. And I hope that Arizona realizes what a great guy they are taking on.
Oh, and Go Steelers!
P.S. For any of you who wonder how my nephew's Steeler fandom is coming along, he took a Terrible Towel (the tasteful black version) back for his mom and a Steelers hat for his dad. I had to swear to my brother that I had nothing whatsoever to do with this. I also had better warn him, I guess, about the consequences of desecrating a Terrible Towel. The Cowboys have enough problems without having to deal with that...