Just as soon as it began, the Pittsburgh Steelers 2011 training camp came to an abrupt end it seemed like. After a bad game against the Redskins last Friday night, the Steelers have spent the past week answering questions, ironing out kinks, and fostering battles for positions and a precious space on the 53-man roster. In the three practices since coming back from Washington, the intensity has increased substantially, sometimes even going beyond the whistle. Now, it is time to show that this intensity translates to the field in the Steelers' second preseason game Thursday night against the Philadelphia Eagles.

Coach Mike Tomlin and his staff are slowly getting a better idea about who the 'contenders and pretenders' are on the 90-man roster that moved into Rooney Hall at Saint Vincent College just three weeks ago. Yet, the positional battles for the Pittsburgh Steelers are far from over. With the third preseason game generally being a chance for the starters to play for an extended amount of time, and the first round of cuts at the end of August fast approaching, Thursday night's game against the Eagles may be the last chance for some of the players to show themselves to coaches and fans. For others, it is a chance to prove the front office right in their draft and free agency decisions.

But with a 90 man roster and even some duplicate numbers, keeping an eye on every player often proves difficult. So as a guide, I give you five players I'll be keeping a close eye on in this year’s Steelers preseason opener. Share the players you will focus on in the comments! 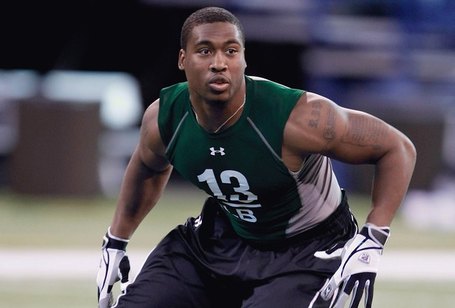 Mortty Ivy was merely an afterthought when the Steelers brought him in as a camp body prior to the 2011 training camp. The former West Virginia standout had spent the past seasons on the Carolina Panthers' practice squad, and hadn't been able to make much of a mark there. But opinions about Ivy quietly started to change in the first week of camp, when he continuously made plays such as blowing up an end around to Mewelde Moore a few yards in the backfield. All of a sudden, he had his coaches' attention.

In the Steelers' preseason opener against the Washington Redskins, Ivy was second on the team in tackles with 6 (all solo), despite playing on only 37 snaps. For comparison, safety Ryan Mundy led the Steelers with 8 tackles (7 solo), but played on 66 snaps to reach that number. Included on Ivy's tackles were quite a few nice run stuffs, a must for any Steelers inside linebacker. And the young WVU grad only got better in practices afterwards, with the highlight being an interception off a Leftwich pass that he returned for a touchdown in Monday's practice and a broken up pass at the goal line on the same day. He also continues to get extensive work on the punt and kick coverage teams looking impressive there as well. Look for him to get an extended look on Thursday as the coaches decide whether he might be worth risking a roster spot on. 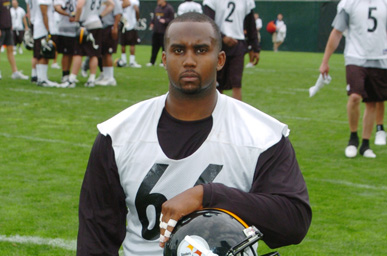 Ever since he was drafted from the University of Texas in the 4th round of the 2008 draft, the name "Tony Hills" has had just about every Steeler fan cringing in their seats. 'A bona fide draft bust', 'one of the few mistakes Steelers GM Kevin Colbert has made', 'too soft', and so on - he has heard all of that, and much more. But quietly, Hills has been improving to the point where he was a decent back up tackle last season. Nonetheless, his value was at left tackle only.

Tony Hills was having his usual training camp when the Steelers preseason opener suddenly changed everything. Against the Washington Redskins, he surprisingly played both tackle and right guard and impressed in both positions, holding his own in pass protection and in the run game. If you watch the lone Steelers touchdown against the Redskins closely, you will notice the impressive block he threw on pro bowler Brian Orakpo that freed up the left side for Redman. He has since gotten practice snaps at right guard with the first team offensive line, adding to a wide-open competition that includes Ramon Foster, Doug Legursky, and Chris Scott. Anyone interested in Tony Hills should read this feature in this morning's Post-Gazette, which also notes that Hills is the most athletic Steeler along the offensive line and that OL coach Sean Kugler is very high on him. Coach Tomlin has confirmed that Hills will start at right guard against the Eagles, so we should get plenty of material to evaluate his worth at the position. 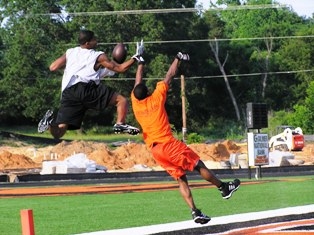 Picture via user Peter Bean, Behind The Steel Curtain

Look at the picture above. Focus on the guy in white. Nice athleticism, isn't it? Well, if you haven't read the great post from Michael Bean's brother Peter right after the draft, the man in the white shirt is Curtis Brown, University of Texas alum and 2011 Pittsburgh Steelers third round draft choice. Despite being called the best corner at Texas (ahead of early second round pick Aaron Williams) by some experts, Brown lasted until the third round because teams didn't like his size or rawness. But make no mistake, Curtis Brown has the potential to be great.

Brown has been sidelined for most of training camp and the preseason opener by various minor injuries, but when he has been on the field, he has been impressive. Quarterbacks rarely throw his way, and when they do (some exceptions included), the result has been bad for the offense. In Tuesday's practice, Brown made a series of plays that had the crowd on the edge of their seats, from a leaping one-handed interception in individual drills to consecutive pass-breakups in the end zone while covering wide receiver Limas Sweed in the two minute drill. One of them was particularly impressive, as he displayed his vertical leaping ability while blocking a Dennis Dixon pass basketball style. Brown has been getting special attention from coaches about defensive schemes, and should get plenty of action considering that both starters at cornerback along with fellow rookie Cortez Allen and second year man Crezdon Butler are already declared out against the Eagles. 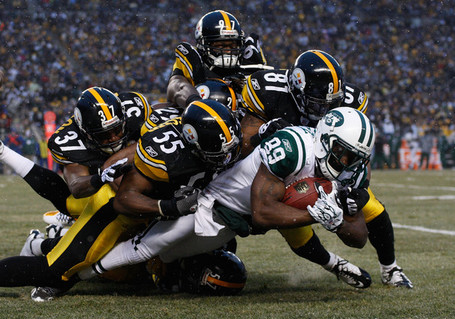 We have had plenty of discussion about the benefit of signing veteran wide receiver Jerricho Cotchery after he had spent his first eight seasons in the NFL with the New York Jets. The gritty slot receiver certainly adds a veteran presence, but can he perform well enough to crack the rotation after he had surgery to repair a herniated disk this past offseason? Additionally, can he pick up the playbook quickly enough to contribute in time for the regular season, and will he accept a backseat in case the budding stars Antonio Brown and Emanuel Sanders break out this year?

Well, the last question should be answered by reports coming out today that he accepted a veteran minimum contract to sign with the Steelers. In an interview with 93.7 The Fan on Tuesday morning, he raved about the Steelers organization and players, further suggesting that he won't be a locker room distraction. But ultimately, his performance on the field will be the deciding factor, and first impressions from Latrobe have been convincing. He looked good during his first practice on Sunday and built on it with a strong performance on Tuesday, when he caught three passes with the second team offense during a two minute drill; including a nice touchdown grab as time expired. Cotchery is all but assured a roster spot after Limas Sweed got placed on the waived/injured list on Wednesday morning, if he hadn't already before that move. But can he contribute on game day? Like Hines Ward, Cotchery is not afraid to go over the middle and on Thursday night, we will get a first look at what he can add to this offense. 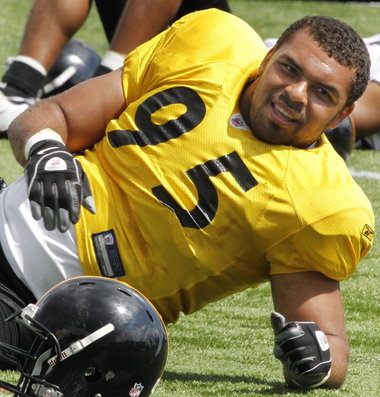 Any fan of the Pittsburgh Steelers knows that Kevin Colbert never whiffs on first round picks. According to that theory, we are sure to have another long-time starter and star in our hands in Cameron Heyward, the 2011 first round draft pick. The son of Pittsburgh Panther legend Craig "Ironhead" Heyward, Cam came into camp looking lost during the first couple of days but picked up with some nice performances recently. Add him to 2009 first round draft pick Ziggy Hood, and we are potentially seeing our defensive ends of the next decade developing together.

Picking a first round draft choice as a Player to Watch is somewhat obvious, but what has transpired during and after the Steelers preseason opener against the Redskins makes Heyward particularly intriguing. The Ohio State alum impressed many with his pursuit of the ball against Washington, but called himself out afterwards by saying that he had had a "terrible" game. He has since picked up his intensity in practices, going hard until and sometimes even beyond the whistle. In every single practice since the Washington game, he has gotten tangled up with offensive linemen such as Jonathan Scott and Ramon Foster. It got to the point where after Monday's practice, several offensive linemen actually approached Heyward to tone it down for "better practice etiquette". You have to love that ferocity, and I am willing to bet that his intensity will show Thursday night against Philadelphia as well.

So these are my Five Players to Watch in the Steelers second preseason game of the 2011 season against the Philadelphia Eagles. Which players do you look most forward to seeing the game Thursday night?