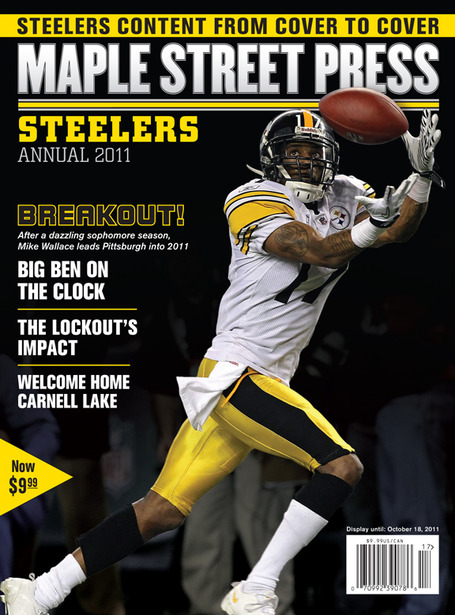 For better or worse, my paycheck has already been secured for editing Maple Street Press's Pittsburgh Steelers Annual for the third consecutive year. I mention that only because I want you to know that by me trying to prod a few of you into purchasing the magazine, I'm not necessarily lining my pockets. But I know for a fact that if sales figures are weak, I might meet a similar fate as other editors whose annuals didn't sell well in previous years. So, even if you just support Behind the Steel Curtain, you'd do me a favor by supporting the project. If you live in Pittsburgh or elsewhere in the Western Pennsylvania region, you'll likely find the publication at stores like Barnes & Noble, Target/Walmart, Borders, etc. For those of you not in market, you can order online. At $9.99 (before shipping), it's a pretty damn good price for 112 pages of advertisement free Steelers content -- past, present and future.

What follows is some sort of amalgamation of the Table of Contents + article summaries taken from the publication's product page on MSP. Let it be known that I might have chosen slightly different ways to combine titles with article overviews. But hopefully you'll get the point and have your interest piqued nonetheless.

By visiting the page, you can find a link to order a copy (or two) for either yourself or a friend or loved one before the 2011 season commences.

I'll be sharing snippets of articles as well as giving a few copies a way in the next two weeks. If you are out of the country and would like a copy, please reach out to me at behindthesteelcurtain@gmail.com and we'll work something out.

As always, thanks for the support and making my 'work' exceptionally fun and rewarding no matter the hours or financial compensation. And to those of you who worked on this year's project with me, many many thanks for a job well done. I love this project because of the opportunities it affords me to collaborate with y'all around the country each spring and summer.

Men Of Steel: Break Down The 2011 Steelers Roster By Position To See How Things Are Coming Together In Pittsburgh
by Michael Bean

Upping The Ante: The Steelers Will Have Their Work Cut Out For Them This Season In The Much-Improved AFC North
by Michael Bean

The Surprising Steelers: The 2010 Season Was Initially Shrouded In Controversy, But See How The Steelers Overcame The Odds To Claim The AFC Title
by Rebecca Rollett and Michael Bean

Returning Home: In Attempting To Rejuvenate The Secondary, The Steelers Turned To A '90s-Era Fan Favorite
by Neal Coolong

In Exclusive Company: Mike Wallace Has Proven His Worth To The Steelers Over His First Two Seasons
by Larry Acker

Bringing Home The Trophy: You Know How Hines Ward Did During The Football Season, So See How He Fared Competing For A Different Kind Of Trophy
by Rebecca Rollett

Out Of Time: Ben Roethlisberger's Timing (Or Lack Thereof) Is Always Up For Debate. Let's Use Hard Data To See How His Style Works
by JJ Cooper

Running Revival: See How The Steelers' Ground Game Sprung To Life In 2010
by Adam Gretz

Go Figure: Statistics Can't Give You All The Answers -- Here Are Some Steeler-Centric Examples
by Freddy J. Nager

Stocked Up: If The Steelers Want To Grab Their Seventh Lombardi, A Few Rookies Could Help
by Michael Bean

Nothing Better Than Being A Steeler: The Steelers Continue To Defy Modern Stereotypes And Standards With Their Family-Like Organization
by Mike Silverstein

Hardball Lessons: In Gauging The NFL's Future, A Glance At Baseball's Model Can Remind Roger Goodell And The Players Of A Few Lessons
by Tim Gleason

Through Thick And Thin: Lessons In Steeler Fan Loyalty Can Be Drawn From The NFL's Last Two Work Stoppages In '82 and '87
by Andrew E. Friedman

A Legacy Of Friendship: Reminiscing About Football, Mortality, And Decades Of Friendship In Western Pennsylvania's Pigskin Country
by David Villiotti

Up Close And Personal: Craig Wolfley's Rookie Season Came When The Steelers' Star Power Was Arguably At Its Highest. Here's His Story Of His First Year In The NFL
by Craig Wolfley