Despite recent announcements like the contract extension for Lawrence Timmons and the signing of veteran offensive lineman Trai Essex, it has been a quiet week of Steelers-related news. The reason is undoubtedly the team's return to their practice facilities on Pittsburgh's South Side, where the media is not allowed to give specific reports of players. After spending weeks reading about our stars' every move, we as fans are now information-starved and can do nothing but look forward to our next preseason game - the Pittsburgh Steelers' bout against the Atlanta Falcons on Saturday night.

By all accounts, the second preseason game against the Philadelphia Eagles last week was a sweeping success. Young players such as Keenan Lewis and Curtis Brown flashed their potential, while the first-team defense showed that it hasn't slowed down; instead, it might have even picked up speed. Yet what we saw was only a meaningless preseason game, and none of the players shining against the Eagles can rest on their marbles.

The regular season starters traditionally play the majority of the third preseason game, but that doesn't mean that camp- and practice standouts can't show their worth. Instead, it presents an opportunity for all of us to guess who has recently impressed the coaches by closely watching player rotations. Find your weekly guide on Five Players to Watch in Saturday night's game against the Philadelphia Eagles after the jump. 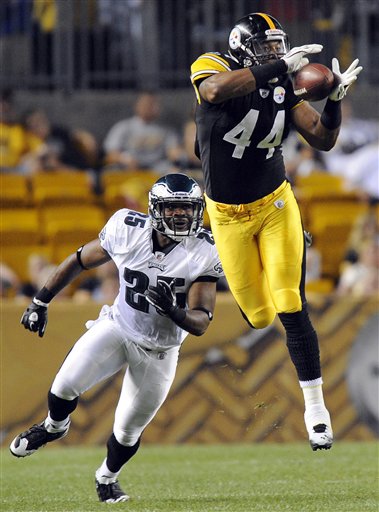 
Ever since Matt Spaeth's departure to the Chicago Bears in free agency, the Steelers have been looking for a third tight end that can back up Heath Miller and David Johnson with productive receptions and blocks. The organization has brought in veterans such as former Bengal Reggie Kelly and recent Buccaneer John Gilmore, hoping to shore up a crucial position in offensive coordinator Bruce Arians' system. But the answer may lie somewhere else, in the form of an undrafted rookie free agent with loads of potential.

I am talking of course about Weslye Saunders, a player from South Carolina who was thought to be one of the top tight ends in the 2010 NFL draft before lying to NCAA investigators and getting kicked off the South Carolina football team. The Steelers, who had brought him in for visits before the draft, decided to give him a chance in training camp, and the young tight end has not disappointed. In college, Saunders was known primarily for his receiving skills, yet he impressed early in camp with solid performances in the popular 'Backs on 'Backers' drill and flashed his potential in various practices. After being a no-show in the preseason opener against Washington, he bounced back with a solid performance against the Eagles when he caught a pass for a first down and was open in the end zone but overthrown by Dixon late in the game. The first roster cuts on Tuesday are fast approaching, and Saunders has to improve on his performance to secure the precious third tight end spot with the Steelers. 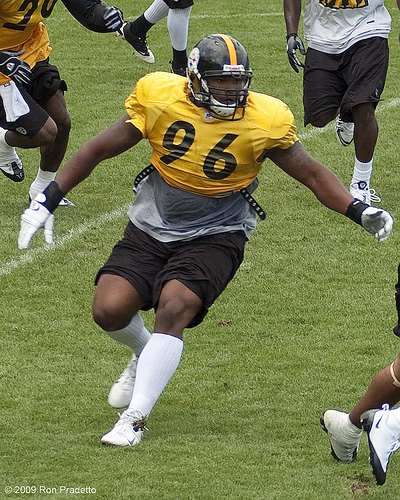 via farm3.static.flickr.com
Pittsburgh Steelers fans already have fond memories of Ziggy Hood, the 2009 first round pick who started at defensive end for an injured Aaron last year and impressed fans and coaches alike. With Smith not getting any younger and the other starter Brett Keisel also on the wrong side of 30, Hood and 2011 first rounder Cameron Heyward are expected to be the future of the Steelers defensive line. But the Ziggy Hood who drew rave reviews late last year and recorded sacks in three consecutive games hasn't shown up in preseason so far.
Against both Washington and Philadelphia, Hood did little to nothing despite once again getting the starting nod ahead of Aaron Smith at left defensive end. Instead, he was outperformed by the likes of Keisel, Heyward, and undrafted rookies Corbin Bryant and Miguel Chavis (before he switched to tight end), although the latter three played against inferior competition and backups. His lack of performance was noted by analysts such as Mark Kaboly, a Steelers beat writer at the Pittsburgh Tribune Review who labeled Hood a 'disappointment' after the game against the Eagles. Hood's disappearance comes as somewhat of a surprise, and his performance last year coupled with strong practices in training camp this year makes his non-production in preseason seem like a minor issue. But we won't know for sure until Hood shows up again, which he will hopefully do in force against the Falcons. 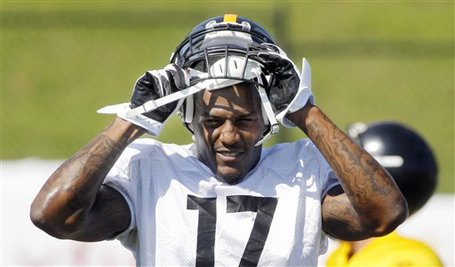 Mike Wallace came out of the lockout and into training camp with a bang. After recording over 1,250 yards receiving and leading the AFC in yards per reception at 21.0 in only his second year, the former third round pick from Mississippi came to Latrobe not being shy about his lofty 2011 goals. He boldly told reporters that he wants to reach 2,000 receiving yards this season, a mark that would break the NFL record in that category set by Jerry Rice by over 100 yards.

Wallace has quickly ascended into the elite ranks of NFL wide receivers, and evidently believes that he can take his game to the next level while being mentioned in one breath with the all-time greats. This comes besides the fact that Tomlin famously called out Wallace last year as being a 'one-trick pony' for only being effective on deep routes, a statement that the young wide receiver rigorously rejects. But much like Hood, Wallace has yet to flash the skills that made him a feared player and essential member of the 2010 Pittsburgh Steelers this preseason. He has only caught one pass in two games so far, and seemingly was unable to get open against the likes of Nnamdi Asomugha and DeAngelo Hall. Both are pro-bowl corners, but nonetheless players that Wallace has to beat if he wants to reach his ambitious goals. He has little to prove and will go into the season as the clear number one receiver; but it would be comforting to see him have a big game in extended playing time against Atlanta. 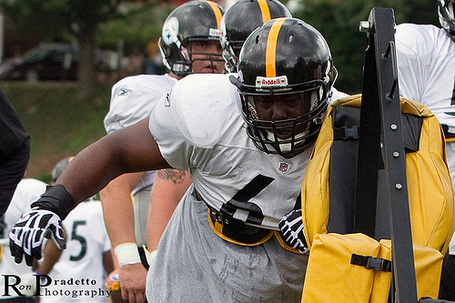 
A few weeks ago, Markus Gilbert was a project that the Steelers hoped to bring along carefully while grooming him to someday be a crucial part of the offensive line. But on Saturday night, Gilbert is expected to start at left tackle in the one preseason game where starters get extensive snaps. With starting LT Jonathan Scott ruled questionable against Atlanta and likely to rest his injured knee, the 2011 draft pick from Florida will be thrown into the cold water when he is expected to secure Ben Roethlisberger's blind side from the likes of pro bowl defensive end Jonathan Abraham.

Before April's draft, the 6 foot 5, 330 pound Gilbert was considered a right tackle or guard prospect. The Steelers however thought differently when they drafted him with the 63rd pick of the second round, preparing him to play left tackle ever since. After an injury and some rocky performances to start training camp, he started coming into his own in practices and was thrown into the cold against the Eagles when Scott went down with a knee injury. Gilbert made some nice plays blocking, but also allowed a quarterback pressure and conceded a penalty. Of course, his night was also cut short by an injury, which fortunately proved minor. The Steelers have precious little depth at left tackle, especially if Tony Hills wins the starting right guard job. If Scott goes down in the regular season or his injury proves more significant than originally thought, Gilbert will have to be ready to step in and against Atlanta, he has the chance to prove his worth along the first team offensive line. 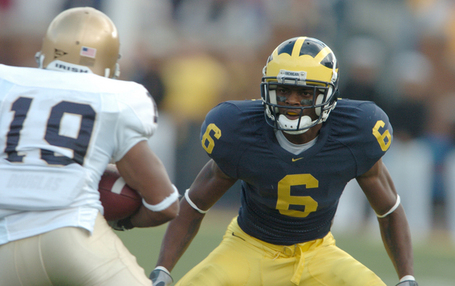 
Above almost everything else, fans everywhere love the tales of underdogs, and Donovan Warren is well on his way to becoming one of those feel-good stories. No player was the subject of more buzz among fans and media this week than the young cornerback, who after a solid training camp and first game against the Redskins had a stellar showing as the Steelers' third corner against the Eagles. The 2010 undrafted free agent made plays in the run game and played well within the system by covering receivers, not giving up any big plays, and not allowing many yards after the catch. Warren came into camp as merely a camp body, but emerged from Latrobe as a serious contender for a spot on the 53 man roster.
That in itself is an impressive feat, considering that the Steelers currently employ a plethora of recently drafted, young cornerbacks such as Crezdon Butler, Keenan Lewis, Curtis Brown, and Cortez Allen. Others on this site have elaborated on how many corner spots will be there for the taking, and who might grasp them. But fans and experts seem to agree that with his recent performances, Warren has played himself into the conversation. The former Michigan Wolverine certainly has the talent, as he was considered by some to be a second or third round pick when he decided to leave the school a year early and enter the draft. But bad performances due to injuries during the combine and pro day kept him from being drafted, so he flew under the radar on the Jets practice squad last season. Warren won't go unnoticed on Saturday night, when he should get plenty of opportunities to play with the top dogs on each team. This is his chance to prove that his game against Philadelphia wasn't a fluke, and a good performance here would go a long way toward securing a roster spot.
From unexpected underdogs to under-performing veterans, these are my Five Players to Watch in the Steelers third preseason game of 2011 against the Atlanta Falcons. Which players do you look most forward to seeing in the game on Saturday night?