IX - With the 2011 NFL season set to kickoff next week, Sports Illustrated is rolling out their regional season preview issues. In Steeler Country, LaMarr Woodley graces the cover. SI predicts the Steelers will win the AFC North once again, but only with a 10-6 record. 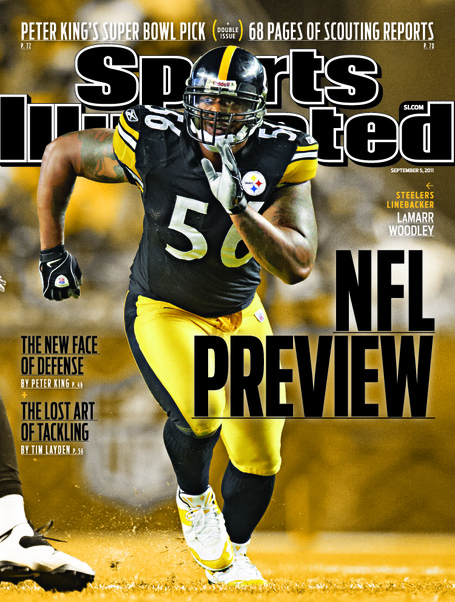 X - I just recently filed my Steelers 2011 season preview for SB Nation's national NFL page. All 32 of the network's editors were asked the same series of questions for the series of previews. Check out my responses about the Steelers, as well as those about the other 31 NFL teams.

XIII -  Following the Steelers win over the Falcons this weekend, SB Nation Pittsburgh colleague Pete Wilmoth shared his thoughts about the performance of the Steelers' secondary. Despite giving up over 200 yards in the first half alone to Matt Ryan, Wilmoth is astute in pointing out that the Steelers pass defense will probably have lots of outings like that -- plenty of yards allowed, but on an inefficiently high volume of passing attempts. I agree completely.

XIV - Last week, I wrote an editorial about Mike Tomlin and the limited acccess he gives to the Pittsburgh media, the national reporters, and to a rabid fanbase that loves to hear him speak. The most commons response I received was 'I'd rather he worry about winning football games'. Well, the winningest active coach in the league, Bill Belichick, has found the time to give fans more creative access, specifically by agreeing to participate in the series premiere of 'A Football Life', a new NFL Films production where coaches agree to be mic'ed up for an entire season. Belichick did so in 2009 for the Patriots 50th anniversary season.  Watch the trailer to the two-part series here. You may hate Belichik, but it's hard not to be excited about that program if you're a Patriots fan. And even if you hate the Patriots, I imagine that it will still be an interesting watch for those who want a glimpse into how Belichik operates. Hopefully we'll get something like that about Tomlin and the Steelers somewhere down the road.

XL - Get inside last Saturday's preseason matchup with the Falcons with a look at this seven minute 'Steelers Gameday Exclusive' video, replete with pregame action, highlights and postgame commentary.

XL - Jim Wexell of Steel City Insider shares the same view as Mike Silverstein (Homer J.) about the difficult decisions that remain to be made with the depth chart at cornerback. Wexell, like always, has a great take on the competitive battle going on and the difficult final choices that Tomlin and Kevin Colbert must make before Saturday's 53-man roster deadline.