Friday nights - the perfect night to party, hang out with friends, or simply enjoy the end of the work week and beginning of the weekend. Or, once a year, the chance to watch the Steelers practice under the lights of the Greater Latrobe High School Football Stadium.

After having spent the beginnings of Steelers Training Camp in Germany ever since becoming a fan, I had never had the opportunity to see what it was like watching my favorite players return to their roots, practicing in front of 10,000 fans in a high school stadium on Friday nights. But that changed this year, when on a beautiful summer evening I finally ventured to Latrobe Memorial Stadium. A recap of the evening, complete with my practice observations and a few pictures, follows after the jump.

For me as a night practice rookie, the day naturally began with some research. When does practice start, what does it cost, and when do the gates open? What about autographs? Answers to all of these questions were quickly found online, and I was ready to go. Well, not quite, because I was still sitting at work itching for the weekend to officially begin. For those of you pondering a visit next year, the cost of admission is a low $5 ($2 for people under 18), practice starts at 7:00 p.m., and the stadium gates open at 5:00 p.m. If you plan on hunting for autographs, the players have a 15 minute session along the fence before practice beginning at 6:45 p.m. In that case, make sure to be there when the gates open - the fence alongside the field fills up quickly. A quick note of caution though: The players randomly pick a spot along the fence to sign for their fans, so you can be lucky enough to get #43 or #56 to sign your memorabilia or unlucky enough to get one of the many camp scrubs.

But enough of the preface - let's get right to it. We arrived at the stadium armed with a notebook at about 5:20 p.m., which was plenty enough time to find a seat in the bleachers at the 40 yard line. In truth, we probably could have gotten the same seats had we arrived an hour later. A country band called "Saddle Up" was the pregame entertainment; if you like country, they were pretty good. Unfortunately, I don't. In other words, the wait began. I will tastefully skip the next hour and get right to about 6:45 p.m., when 8 school buses rolled into the stadium escorted by a police escort and loud cheers.

Coach Tomlin was the first on the field, waving to the cheering masses in his vintage black outfit. You could just see him soak in the atmosphere. Next was Daniel Sepulveda, who wasted no time going straight to the fence to mingle with the fans. You have to respect his effort, as he was also among the last to stop signing once the horn sounded to mark the beginning of practice. Among those attracting huge crowds were Troy, Ryan Clark (laughing to himself when people saw that Troy was signing about 20 feet away from him and pretty much left him alone), Ben, and Woodley. Speaking of Lamarr, the guy is quickly becoming a fan favorite, and he is starting to sport his smile almost as often as Hines Ward.

Remaining seated in the bleachers, unwilling to give up our prime seats, we had a great vintage point to watch the entire spectacle unfold. I think I even got a glimpse of Wes Lyons signing - not because I know at all what his face looks like, but because there was one person towering over everybody. Did I mention that Lyons is one tall human being? But the highlight of the pre-practice spectacle was Coach Cowher, in town for a visit and as I later found out also for the filming of the new Batman movie. The Chin attracted loud cheers, and was almost mulled by a crowd of autograph-seekers after completing a radio interview about 20 feet away from us. Throughout practice, he could be seen talking and joking with the likes of Dan and Art Rooney, Coach Tomlin, Kevin Colbert, and some veterans including Ben, Hines, Troy, Farrior, and Larry Foote. He was clearly having fun.

Then, practice began. My observations, as thorough as I could being an amateur note taker, follow.

So much for my practice observations! Though long, they aren't nearly complete as there was so much going on that it was nearly impossible to watch everything at the same time. After practice, the night was topped off with fireworks at the stadium - a perfect ending to a great night. I also took some pictures, and attached them to this post; once again I am sorry for the quality, my cell phone camera doesn't seem like it when the sun goes down. If you plan on making it down to Latrobe next year, I strongly suggest you consider the night practice! 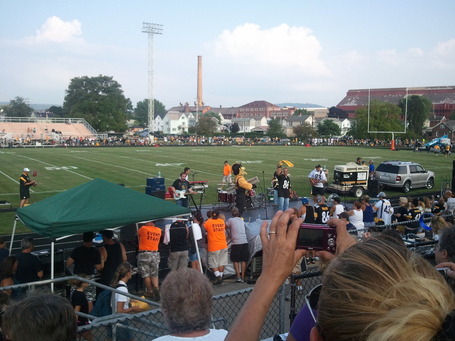 First one out: Daniel Sepulveda 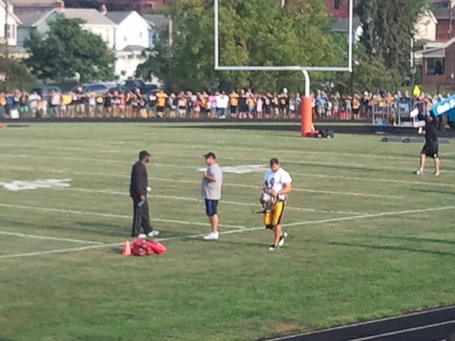 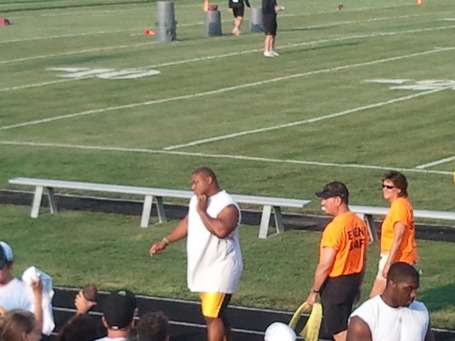 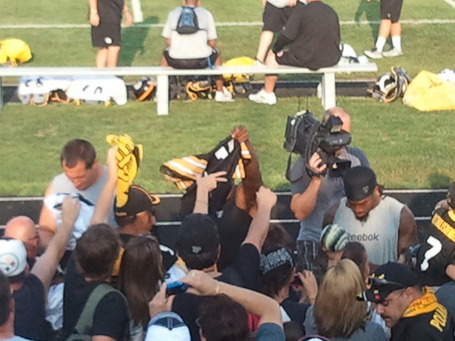 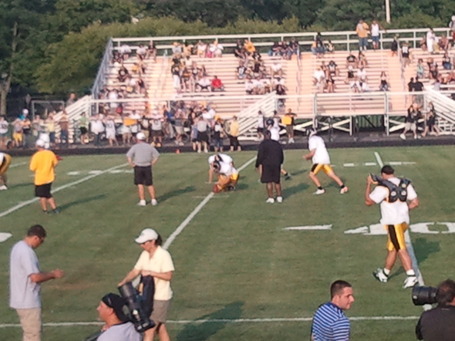 Coach Cowher (in organge/pink) gives an interview, the fans wait 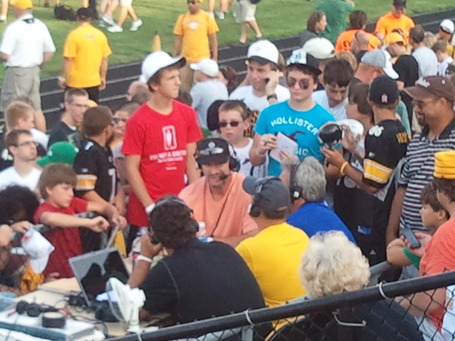 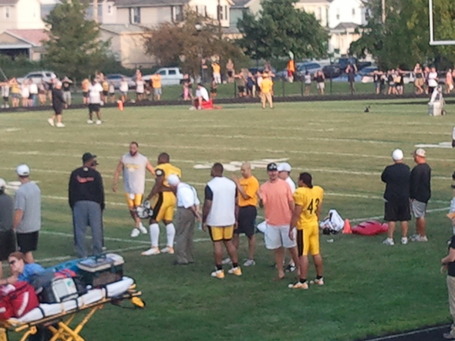 Dennis Dixon throws under the watchful eyes of Byron Leftwich 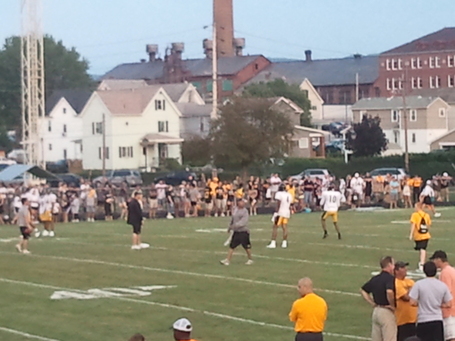