If you have not heard, a few of the Steelers players were asked about chop blocking during the game in an interview today. James Farrior and Lawrence Timmons brought up the issue, saying that Ravens C Matt Birk and G Marshall Yanda were routinely throwing chop blocks at the knees of our NT, Casey Hampton. If you do not know what a chop block is, let me explain. A chop block is when a defensive player is engaged up high with an offensive lineman and then another player comes and takes out his legs. Sometimes it is illegal, and sometimes it is not. Either way, it is a shady tactic that can lead to people getting hurt.

As you already know Big Snack is basically an unmovable beast that generally occupies two blockers. He is a huge reason why our run defense has been so good for so long, because it is almost impossible to run anywhere through the line because of his presence. How could someone get around that? Completely taking him out of the play through a chop block.

I switched on the game tape and within the first few seconds of the game I got exactly what I was looking for. On the Ravens very first play of the game Ray Rice ran for 36 yards right up the left center of the line. Clean blocking, right? Not so fast. Take a look at these screen caps. 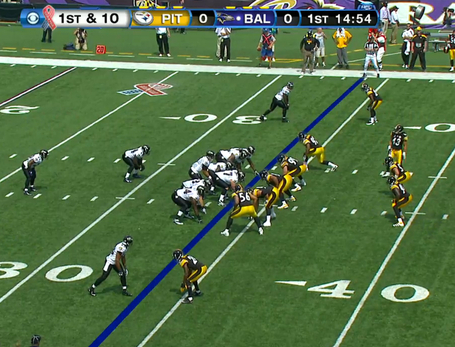 You can see Casey lined up directly over center here before the snap. The play looks like a run all the way and the Steelers seem to know it. 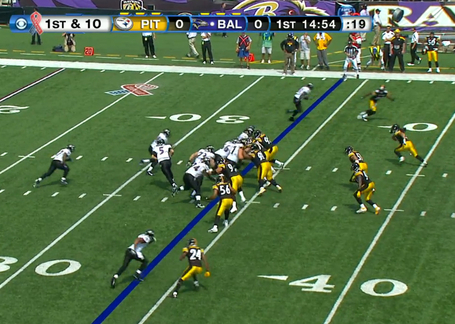 This is right after the snap you can see Hampton is locked up with Matt Birk and the Ravens line is showing a run to the left. You can see the LT left Woodley to block Aaron Smith and you can see Yands coming across the back of the line presumably to get down field and block. 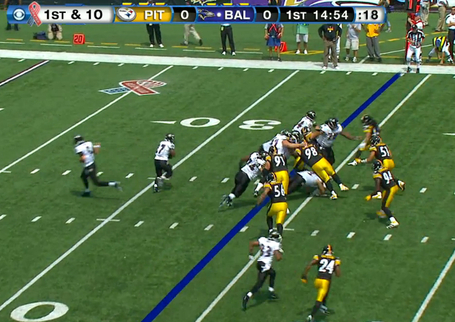 Boom. Yanda you dirty little...instead of getting downfield Yanda takes a cheap shot and dives at Hampton's legs while he is engaged with Birk. And that is why I think the Steelers were getting chippy.

The Ravens ran a run on the next play before the Anquan Boldin play. Right before the snap, the Steelers shifted their DL, which put Hampton off-kilter from Birk. Yanda throws a legal chop block at Hampton, but he still makes the tackle for only a 3 yard gain.

On to the next series, again, the first play on the Ravens drive is a run to the left. This time Rice only gains 5 yards, but with some of the same chop blocking: 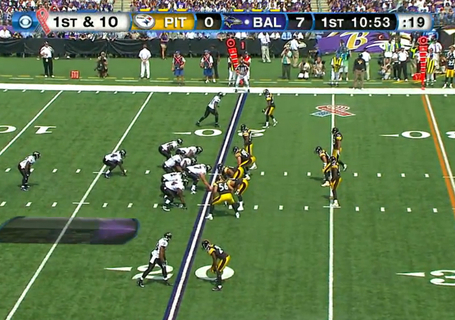 Here we are again presnap almost an identical formation with the TE off the line this time. Again, Hampton is lined over top the center. 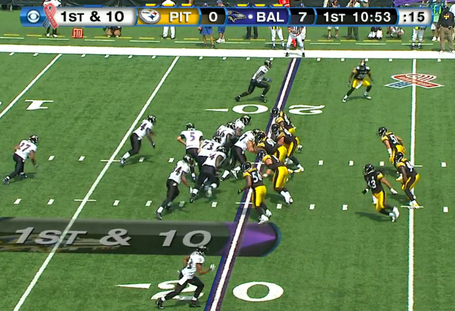 Right after the snap you can see that Hampton is locked in with Birk. Woodley and Smith know a run is coming and they are ready. The right side of the Ravens line is about to swing across the line. We can already see Yanda making the same movement from the last chop block. 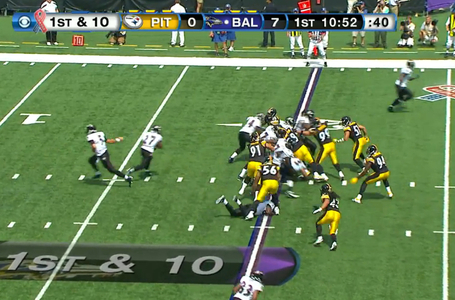 It is harder to see on this one, but Yanda makes the another dangerous dive at Casey's legs while he is engaged with Birk. How he did not end up with a torn ACL from either of these play is pure luck.

After these two I think the Steelers caught on to their dirty little tactic. They kept shifting the line after the snap and I didn't catch any more, although I only rewatched the first half. A few other times I did see Yanda dive at Hampton, but Casey had fought off Birk quickly and prevented his legs from being taken out.

I'm curious how well the Ravens running game would have done without this tactic that forced the Steelers to adjust their DL. I expect Tomlin caught this too and will make sure the refs are watching for it next game.