Share All sharing options for: Mike Wallace's 53-Yard Snag Against Seahawks Should (but won't) be Contender for 2011 Catch of the Year

I think I might have not watched the replays of Mike Wallace's 53-yard catch when they were shown live. Consequently, I didn't full appreciate what a remarkably awesome snag he pulled off late in the third quarter with his team looking to add to its 24-0 lead over the Seattle Seahawks. Facing a 3rd and 9 from their own 27, Ben Roethlisberger knew there was little risk in airing it out deep to his fastest receiver, Wallace, once he saw No. 17 get a step on his man on the perimeter. Even if the pass had been picked off, it would have essentially amounted to a punt. Big Ben let it fly, but made sure to not underthrow Wallace and give the defender a chance to make a play on the ball. If anyone was going to track it down, it would be Wallace, but it didn't look all that likely in the final split second before Wallace's hands extended for the ball 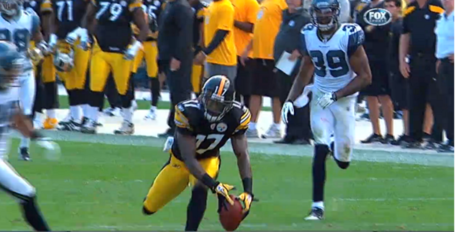 The one-handed snares and the diving catches get more attention in the highlight reels, but really this catch is just as, if not more, impressive than those types of grabs -- certainly the one-handed grabs. This is Wallace at full-speed, reaching out with his finger tips to catch the ball in stride with his legs a good 3 yards extended from one another.

Freakish play my friends from what is looking more and more like the most dangerous wide receiver to ever wear a Steelers uniform.