A Statistical Review of the Ravens, Bengals, Browns, and Steelers

The Steelers were back in the saddle again this week after their very early bye, and to the great relief of Steeler Nation, their running game made its first 2012 season appearance. I noted in the Week 4 post that during the bye week no Steeler, not even James Harrison, had received a FedEx from the NFL offices, but that's only too likely to change this week. But enough about the Steelers—what does the rest of the AFC North think about the Steelers? On second thought, never mind—we probably don't want to know.

So on to the data. We're getting far enough into the season now to be able to look for trends since the beginning of the season as well as the usual Week 5 figures and averages. Let's begin with the record, which is suddenly a bit more interesting:

It's pretty evident who is the top dog in the AFC North at the moment. Time will tell whether the Ravens continue to sweep all before them or falter down the stretch. There is data to support both suppositions, although I would say there is more to support the former than the latter. Let's look at it, and you can draw your own conclusions.

Although Ben Roethlisberger had a weak outing this past Sunday, at least statistically, his NFL QB rating for the week was still higher than any other QB in the AFC North, except—wait for it—Brandon Weeden. (The actual figures were: Joe Flacco: 55.6, Andy Dalton, 63.5, Brandon Weeden, 84.3, Ben Roethlisberger, 72.7.) 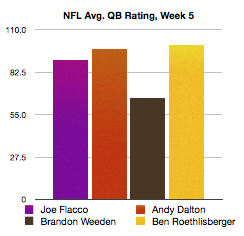 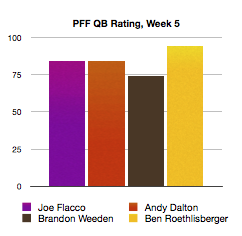 Roethlisberger is still the head of the pack. Here are the PFF rankings:

I thought it might be time to start looking at the trends, so I took the PFF ratings from each week and graphed them: 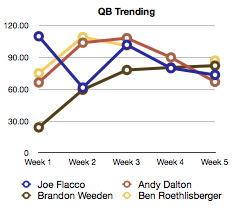 (Naturally, there is no data point for Roethlisberger in Week 4.) I don't know if it tells us much so far, but it will be interesting to watch as we go through the season. The most interesting one so far is the steady improvement of Brandon Weeden.

Roethlisberger is still winning the interception watch, by a lot: he has one, Flacco three, Dalton four, and Weeden seven. Of course, they have all played one more game than he has.

As we saw this week, if your receivers aren't holding on to the passes you throw, it makes little difference how nice a pass it was or how perfectly placed. (Little difference to anybody but the folks at PFF and other such sites, that is.) So let's see how the rate of incompletions to completions is going. If this week's QB ratings are anything to go by, probably not terribly well: 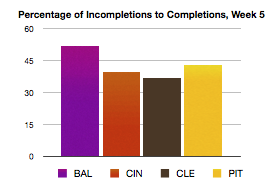 Wow, I don't know what was going on at Arrowhead Stadium, but it wasn't good—less than half of Flacco's passes were completed. It's ironic to see the two teams who won their games having the most drops. Or, were they drops?

Something tells me a lot of them were, this week. Every week I have been looking up the PFF dropped pass listing, because they reduce a player's drops to those they feel are on the receiver rather than the passer. Up until now I have been listing the players who have dropped passes—basically anyone Brandon Weeden has thrown to, and a sprinkling of players from the other teams. This week it makes more sense to list who hasn't dropped a pass. Let's look:

That's it. (I did cut it off at five or more targets for WRs and TEs, and two targets for RBs—there were a few other minor players who had been thrown at once or twice.)

And even though he doesn't, strictly speaking, qualify, I want to mention Josh Cribbs, who has caught all four of the passes thrown his way. In Cleveland, that's pretty remarkable.

Just for interest, here are the top receivers in the AFC North, according to one of PFF's so-called signature stats. (This is receivers who have a certain minimum of targets.) It ranks the receivers by the QB rating of the person passing to them. In other words, these are receivers who make their QB better. (The ratings are for the whole NFL.)

Joe Flacco has an unbelievable 137.5 passer rating when he throws to Torrey Smith. I note this for the edification of the Steelers coaching staff, nudge nudge wink wink...

Unfortunately, the PFF rankings for the more usual sort of stuff have A.J. Green quite high on the list, No. 4 in fact, followed by Smith at No. 20. The first PIT receiver doesn't show up until No. 33, and that is neither of the two on the above list, but Emmanuel Sanders. PFF's usual stats don't show Mike Wallace in a great light, I'm afraid, although they like him better than Cleveland's Greg Little. They like almost anybody better than Little.

And in case you're wondering how the TE's rank, PFF likes HEEAATTHH, putting him at No. 7 along with Martellus Bennet of the Giants. The next AFC North TEs to show up are the Baltimore boys, at Nos. 32 for Dickson and 36 for Pitta.

On to Rushing. At least this week's numbers for Pittsburgh aren't so depressing!

Here are the average figures as of Week 5:

Yes, friends, the Steelers are edging their way toward respectability, at least presuming Sunday's results weren't an anomaly. I think I'll give it another week or two before I start charting the trending rushing data. This seems only fair, since Pittsburgh was the only team playing without its principal back for the first quarter of the season.

So Baltimore has held steady, and everyone else has dropped, rather precipitously in the cases of the Bengals and Browns.

Passes Defensed and Sacks: (These figures are averaged over the season:)

And now the Turnover/Takeaway Differential: 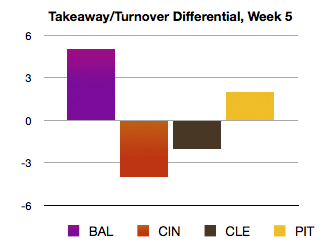 Last week I posed the question of why the Bengals defense isn't taking away more balls, especially with their sack numbers, which were the highest in the league. The Bengals managed only two sacks on Sunday's game versus the Dolphins, but they did have two takeaways. However, the offense lost the ball three times, so it is deeper into the hole for the Bengals.

Rather than the averages, I decided to continue with the trends at this point. Since not all the teams have played five games, I decided everyone would be on the Steelers schedule, so the other three teams will be a week behind real life until they have their bye:

It's hard to say what it means yet, but it looks nice. (Although one thing it clearly means is Josh Cribbs is a beast.) Here are the averages as of this week:

Fifty percent of the AFC North now has kickers who have missed a field goal. The two who haven't? Cleveland's Phil Dawson and Pittsburgh's Shaun Suisham.

You get a bonus—both this week's figure and the trending graph:

Unfortunately for Cleveland, that line is going to continue downwards until they actually win some games...

Baltimore still looks like the most solid team overall, despite not being able to put up more than nine points against Kansas City. But then, they always seem to have a game or two like that—at least they won this one.

The Browns just can't catch a break. This doesn't seem to be their season. If they can manage not to ruin Brandon Weeden through a psychological crisis brought on by his receivers dropping half his passes, and if they draft some receivers who can catch them next year, they might have the makings of a good ball club. But this year it looks as if they are going to stick with their customary role of spoiler. It's early days yet, though, and they may well come out of their funk. If they do, it will likely be just in time to play the Steelers...

Cincinnati seems to have taken a step back, but I still believe they have too many assets not to make a good showing this season.

And finally, the Steelers are showing their usual maddening propensity to keep up the suspense. Are they going to get their act together and turn out to be really good? If so, it's a great mercy all the division games are yet to come. Or are they going to regress to the mean, as many people believed they would this year? It seems hard to believe, given the offensive firepower available. But unless the defense can step up in a consistent fashion, the offense is going to have to play mistake-free football for the team to move up in the AFC North. And mistake-free football isn't really the Steeler's style, particularly so far this year. But only time will tell. Thursday night's game will be a good place to start.