Get your Week 6 picks in before 8:20 pm tonight (kickoff for your Pittsburgh Steelers vs. the Tennessee Titans).

Time for our weekly Pick 6 Football recap! I'm sure most of you know the drill - pick 6 players that fit under your $120 budget and the top-10 scorers will be featured here each week (click here for more on rules and scoring if you're unfamiliar). It's just some fun, friendly competition in our BTSC community and you need to hit the link above or the banner below and jump in. Get your picks in before 8:20 pm tonight - kickoff time for Thursday Night Football between the glorious Pittsburgh Steelers and the numbskulls of Tennessee who are still paying off their karmic debt for stomping on the Terrible Towel four years ago. 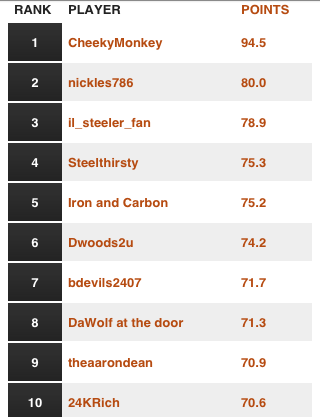 As you can see, I'm not on there. My dreams of alternately winning every odd week and bombing every even week have been thoroughly dashed (though in an amusing twist, I wound up in 11th, so my placings in every odd week have still only involved the numeral '1').

But this is not about me, this is about CheekyMonkey - who now holds the distinction for largest margin between 1st and 2nd place finishers. As you will see, the cheeky fellow blatantly ignored my bonus challenge last week to form a team comprised entirely of $0.50 players. Nickles786 in 2nd place ignored the challenge as well, but il_steeler_fan checked into 3rd with six dudes that cost $3 total, so they win the unofficial bonus!

As much as his disregard for bonus challenges pains me, CheekyMonkey hit paydirt with his big money acquisitions - Tony Gonzalez was the top-scoring TE and Arian Foster was the second-highest scoring RB. Add on that Andrew Luck was the top-scoring QB, and that's a pretty sweet trio pacing his picks.

So who've you got this week?

I ended up with three Steelers (can anyone guess who?), so I'm definitely counting on the Titans' defense to be as bad as advertised (have given up 30+ points in all of their games so far!) and will be doubly crushed if they somehow decide to show up after a short week.