James Harrison and others speak about a new technology which appears to help prevent concussions.

I'm not a morning person. It takes a lot to get me out of bed before my usual waking hours. But when I was given the opportunity to attend a press conference this morning in downtown Pittsburgh for "an announcement [which] could save the game of football," I was on it!

In addition to the company's founder and CEO, Rob Vito, Dr. Joseph Maroon, the Steelers' neurologist, Dr. Julian Bailes, a member of the NFL Concussion Committee and a consultant to the NFLPA, and Don DelNegro, the Athletic Trainer for the 2011 Boston Bruins were speaking. But the clincher for me was James Harrison and Charlie Batch, had I required any additional persuasion. Therefore I found myself at the William Penn Omni, ready for enlightenment. Here's what I heard:

I assumed this was a new type of helmet, but it's not. It isn't sport-specific. It isn't, relatively speaking, expensive, or heavy, or weird-looking. And it wasn't originally developed for sports applications at all.

So what is this stuff? It's called CRT (Concussion Reduction Technology,) and it is a sort of sandwich of military-grade kevlar and a foam which disperses energy. The sports applications are quite recent. Michael Vick wore a vest, adapted from the military style bullet-proof vests, so he could play a week after breaking his ribs.

Last season after James Harrison had his orbital bone broken, he looked around for some additional protection. He read about Vick, looked into the material, and was one of the first NFL players to wear it in his helmet. He was impressed with it immediately, and said he hasn't had any "issues" since he began using it.

During the question-and-answer session, he was asked by a long time beat writer about whether he had ever sustained a concussion, since he had never appeared on an injury report as being concussed. His answer was strangely reminiscent of Troy Polamalu's famous remarks when asked the same question last summer. After hemming and hawing a bit, he admitted that if you use the League's current definition of concussion, he had probably sustained—well—"a lot. Probably in the double digits."

One of the more appalling statistics to come out of the presentations was this: 31% percent of players with concussion symptoms are sent back to play later in the same game. This statistic is, I believe, across the spectrum of sports, and likely includes youth sports as well as college and professional sports. It is an amazingly specific number for data I suspect it is pretty hard to collect. But if the reality is anything close to that, it's pretty scary.

Interestingly, today was also the day the Lions released the information that Jahvid Best is still not cleared to play. He was concussed for a second time in a short span on this day, one year ago. The story is all too familiar to Pittsburgh sports fans, who waited in vain for Sidney Crosby to return to the ice in 2010, and waited a good bit of the 2011 season as well. Again, he was the victim of two concussions within a short period of time. The first was seemingly minor, the second devastating.

An athlete sustaining a concussion is three times as likely to sustain a second concussion in the same season. Combine this with the fact that many concussions go undiagnosed (particularly in youth sports) and you have a recipe for disaster.

What about the regular NFL helmets? How well do they work? In fact, they work extremely well, for what they were designed to prevent. In 1973, the National Operating Committee on Standards for Athletic Equipment (NOCSAE) came up with regulations for preventing skull fractures. The helmets have done this very successfully, and no NFL player has fractured his skull since the 1980s. However, the guidelines have not been updated since 1973, and of course vast amounts of evidence have emerged since then about the effects of head trauma, independent of any damage to the skull.

After the company designed the helmet padding, they hired an independent company to run bio-mechanical tests on standard helmets. The lab compared standard, regulation helmets and standard helmets fitted with CRT pads. Here is a graph of the results for football helmets: 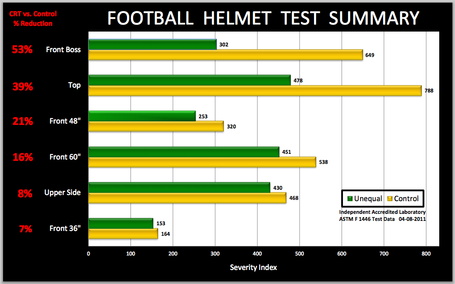 The Severity Index is a measurement of the hazard, or risk of injury, associated with helmet impacts. The helmets used for the test were all new and unused. This is an interesting point, because the foam padding in a helmet will compress gradually after numerous impacts and, as it compresses, loses much of whatever effectiveness it had.

As you can see, the effectiveness of the inserts differed from different angles of impact, but there was at least a slight reduction at all angles, and at a straight-on hit the reduction was greater than 50%. (The study also tested hockey and baseball helmets. The reduction was even greater for a baseball helmet, and was less, although still significant, for a hockey helmet. It was significant enough to persuade long-time Boston Bruins Athletic Trainer Don DelNegro to outfit the helmets of some of the 2011 Stanley Cup-winning team with CRT pads.)

Dr. Maroon was impressed with the data above, although he believes more studies need to be done. He said they are considering doing these studies in Pittsburgh. He is a tri-athlete himself, and has bought the bicycling cap to use. Dr. Julian Bailes said he is very impressed with the data he is seeing and with the experiences people are having, and would recommend it for anyone involved with activities involving the possibility of head trauma.

The team doctor for the Cowboys, who has recommended this material to about 250 athletes from youth football up through his NFL players, claims that not one has been re-concussed. He is getting ready to publish a paper about his experience. Yes, the evidence so far is anecdotal, but it is very intriguing.

One of this morning's speakers is the mother of a high school football player who sustained a concussion last year. Her husband searched the internet for something to make him safer when he returned to playing, and he found CRT. The comment which really got my attention was from the son—once he started wearing the pads inside his helmet, he didn't have headaches after games anymore.

I was floored to discover this is extremely common for players at all levels of the game. James Harrison made the same comment, noting "The league is mandating next year that we wear thigh and knee pads. I don't know how many people's careers have been ended on a thigh or knee bruise. We have guys now that are 30, 31 years old that are having to quit the game because they have severe headaches." Harrison went on to say that he doesn't have headaches now after games, and said that if his kids want to play a sport, he will see to it they use this padding.

Charlie Batch also spoke briefly, and then had to leave, so I was unable to ask him the question I was most curious about—whether the NFLPA planned to push teams to require this. Batch mentioned that after Harrison's experience "about a half dozen [Steelers] players are using the pads." I asked Harrison why on earth only a half dozen other Steelers were using the material when he had found it so helpful—what was the resistance?

He said, "Well, I really don't know—it's a personal choice—a lot of guys don't want to wear it because it makes your helmet a little bit heavier. Some of the guys, they haven't had any issues yet, they haven't been concussed. For me, if something works, I'm gonna use it. If you tell me if I play with a snake, if it bites me and I go out the next day and have a great game, I'm going to play with a snake every Saturday night."

The weight in question is about three ounces. Harrison noted he wouldn't care if it weighed a pound more, because of the increased sense of security he gets from having it in his helmet. Not surprisingly, one of the players who is using CRT is Troy Polamalu.

So where can you get this stuff? The company is called Unequal Technologies, and you can find videos and information about their products on the linked website. I'm ordering kits for my grandsons who are playing soccer in Britain. The CEO of the company isn't guaranteeing anything at this juncture, but the evidence they presented was sufficiently compelling to me that it's a no-brainer.