The new SB United format requires rather shorter titles than one could get away with in the old format, so the whole "A Comparison Between the 21st Century Super Bowl Teams and the 2012 Pittsburgh Steelers, Not That I'm Saying In Any Way, Shape or Form the 2012 Steelers are Comparable, If You See What I Mean" thing doesn't really work. But as I typed the title this week it felt a bit like the T shirts and bumper stickers one used to see around town: "Pittsburgh—City of Champions, and the Pirates."

The 2012 Steelers seem to be having an identity crisis at the moment, and appear increasingly unlikely to bear much resemblance to the Super Bowl teams of the past decade. But those teams had flaws, too, and it is interesting to look at them and compare the seasons.

This game was Pittsburgh's second consecutive loss at home (they won the previous week in San Diego) and their third of four home losses. Quarterback Tommy Maddox was starting for an injured Ben Roethlisberger, who sustained a knee injury in the last few seconds of the previous week's game. Maddox did not play well, throwing three interceptions in what was his second start in just over a year. (Prior to this game, the Steelers had not been intercepted.) Head coach Bill Cowher considered pulling Maddox partway through the game in favor of No. 3 QB Charlie Batch, but decided not to, as Batch had not started a game since 2001. Ironically, the winning QB was Byron Leftwich.

Before the game, punter Chris Gardocki had a streak of 1,066 punts without a block. During the second quarter a punt was deflected by Rashean Mathis, but Gardocki's streak was intact as the punt traveled past the line of scrimmage, barely. And speaking of streaks, Hines Ward, although dealing with a hamstring issue, played in his 116th consecutive game.

The opponent was again the Jaguars, but this time the game was in Jacksonville and the result was a win. QB Ben Roethlisberger was injured again, this time an injury to his throwing shoulder, but he played anyway and posted a three touchdown, 309 yard game, garnering him the AFC Offensive Player of the Week award. An interception returned 72 yards for a touchdown by the same troublesome Rashean Mathis started the game off in Jacksonville's favor, but Pittsburgh pulled out a five-point win.

In Ben Roethlisberger's first game back after his suspension and the Steelers' bye week, he definitely looked rusty, particularly in the earlier part of the game. One of his passes unfortunately found the hands of the Brown's rookie CB Joe Haden. The first points were put on the board by Phil Dawson, the Browns' kicker. (I'm thinking it would be interesting to calculate the total number of points Dawson has been responsible for since being signed by Cleveland, vs. the total points the team has accumulated. I'm guessing it would be a substantial fraction.)

Although the Steelers were unable to put any answering points on the board in the first quarter, Roethlisberger subsequently threw three touchdown passes, to Mike Wallace, Hines Ward, and, who else, Heath Miller. A Rashard Mendenhall TD completed the domination of the Browns, who only managed an additional seven points for the rest of the game. The Browns attempted to take some pressure off rookie QB Colt McCoy (this was his first NFL start) by running Joshua Cribbs in a wildcat package, but James Harrison put a stop to any further nonsense by knocking Cribbs out of the game. While he was at it, he took out Mohamed Massaquoi. Both were head hits, both players were concussed, and the two hits, along with a number of other helmet-to-helmet hits in Week 6 games led to the league crackdown on these types of plays. Harrison's wallet is considerably lighter since this game.

The Steelers gave up their second road loss in a row to a last-minute field goal. Titans running back Chris Johnson, whose 2012 season was unimpressive to say the least, still didn't rush for over 100 yards, but he did manage 91 yards against the once-proud Steelers defense, who allowed an average of 4.3 yards per attempt. Despite the best efforts of the Tennessee receiving corps to dishearten him, veteran QB Matt Hasselbeck completed a sufficient number of passes to keep the Titans in the game, and Rob Bironas won it for them. Steelers kicker Shaun Suisham, who was a perfect 11 of 11 field goals made on the season, included matching his career long of 52 yards, missed a 54-yard attempt in the last minute of the game. A bobbled pass here, a blocked punt there, a dropped interception, and pretty soon you are talking serious points.

Several franchise benchmarks were equalled or surpassed in this game. Ben Roethlisberger surpassed Terry Bradshaw's team-high passing record with a short pass to Heath Miller. Heath Miller, already holding the Steelers record for receptions for a tight end, moved up to the No. 4 spot for all Pittsburgh receivers, passing Louis Lipps. Isaac Redman is the only Steelers RB other than Frenchy Fuqua to record over 100 yards receiving in a game.

I suspect all three men would trade those stats in a heartbeat for a win. Or a healthy Troy Polamalu. Or Maurkice Pouncey. Or Rashard Mendenhall. Or LaMarr Woodley. Or Marcus Gilbert. Well, maybe not Marcus Gilbert. The linemen must be giving secret sighs of relief, as essentially every one of the offensive line injuries this season have occurred when Gilbert rolled on one of his teammates' legs. His injury is now thought to be more serious than originally projected, and if over the next several weeks the offensive line stays surprisingly healthy, the Steelers might want to think about sending Gilbert to re-education camp.

Looking at the 2005 passer rating for Tommie Maddox, I suppose it isn't too surprising he was booed. One can see just how good Ben Roethlisberger had been in 2005 when the season average is still close to 110.0. Of course, the 2005 record is on considerably fewer passing attempts—114 at this point in the season in 2005, 199 in 2012.

Notice the respectable rushing average despite a poor Game 5 in 2005.

The top chart is for Game 5, the bottom the Season Average. 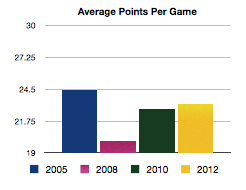 So far, not too bad. The 2012 offense isn't the powerhouse many thought it would be at the beginning of the season, but it compares reasonably well with the other three years. Now, on to what is probably the bad news, the defensive stats: 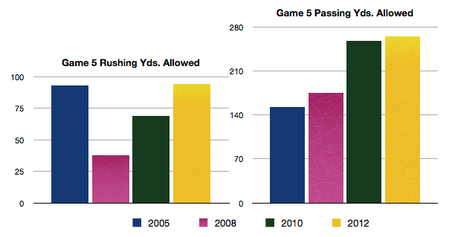 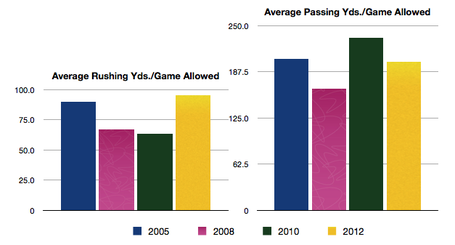 The 2012 defense is giving up more rushing yards than any of the other teams, but not vastly more, and the pass defense (except for Game 5) looks okay, really. 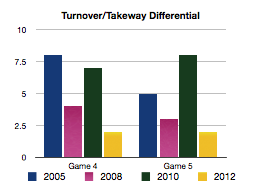 Both the 2005 and 2008 clubs took a hit in the differential in Game 5, although the 2008 Steelers won their game, while the 2010 Steelers continued to accumulate takeaways without the offense giving too many of them back. Fortunately for the 2012 team the offense hasn't been overly generous with the ball yet. If this changes, look for the gold bar to dip under zero for the first time. 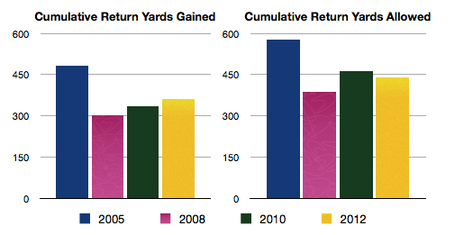 Strangely, like last week, the 2010 Steelers once again had no field goals, but this week it was because Jeff Reed was never called upon to make one, not because he missed any.

Although the total points for the 2012 Steelers at this juncture are higher than any other team except the 2005 club, (and the 2005 total is only five points higher,) a good bit more of the scoring is coming via field goals in 2012 than in other years. Two of the three losses this season would have been wins had one field goal in each game been a touchdown instead. On such small matters does a season ultimately rest.

This final statistic puts everything else in perspective: 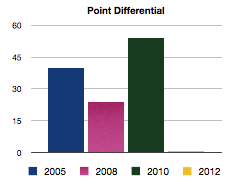 Naturally, given the 2012 Steelers have lost more games than any of the other three teams, it isn't surprising the point differential isn't equivalent. I suppose the good news is, it is still on the positive side—just. But this season the Steelers have made one more point than they have given up. This is not a recipe for a successful season. The really odd thing, I suppose, is 2010—despite being without Ben Roethlisberger until this game, the team had made 54 points more than the defense had given up. It would be nice if the 2012 team would give it a try. Starting this Sunday, perhaps...