As we've done previously, we joined up with the editor of the opposing team for a list of questions pertaining to the opposing team. I'm thrilled to work to CIncy Jungle's editor, Josh Kirkendall, of Cincy Jungle, a site I consider to be one of the strongest on SB Nation. Kirkendall has been in his spot for a while, and his strong writing and thorough coverage makes Cincy Jungle a mandatory stop for me in my news gathering. Here are his responses to five questions I came up with, mostly off the top of my head. -nc

1. As we all know, A.J. Green is at least one quarter thoroughbred horse. His last three games, 22 catches, 317 yards, four touchdowns. I honestly don't think a duplication of those stats in this game alone is out of the realm of possibility. What is he not good at?

Here's the thing. Green could be the best receiver of this generation and I don't say that because of his raw athletic ability. The prima donna attitudes that saturated guys like Chad Johnson and Terrell Owens doesn't exist with Green. He's humble and extremely receptive to coaching.

But just as important, he has this drive to be great. This guy spent last summer training with Calvin Johnson and watches tape on Larry Fitzgerald's precision routes. Not only does he study, he listens to coaches. Green won't shy away from being ambitious, wanting to be mentioned among the great receivers playing today. But he's humble enough to admit he has a long way to go. And he won't be a dick getting there.

And before I embarrassingly ramble more about my man-crush, it's important to note that Andy Dalton's quick development has helped immensely. Both arrived at the same time, hit it off great and act as two parts of a whole.

2. Did you realize rookie WR Mohamad Sanu's 73-yard touchdown pass to Green in Week 3 was the longest pass from a non quarterback since Steelers punter Josh Miller hit free safety Chris Hope on a fake punt for 81 yards?

Offensive coordinator Jay Gruden admitted after the game that when offenses come out in Wildcat formation, Redskins defensive coordinator Jim Haslet almost exclusively runs a Cover Zero. Sure enough A.J. Green escaped the coverage of a slower-footed safety like a bad Match.com date and easily scored the touchdown.

But that pass. If I created a top-five list of things I totally didn't expect at the end of the year, that would be up there.

Oh, man. Isn't that a question of questions? He doesn't have great instinct, he tends to forget that play-action means that the quarterback keeps the football and when teams run misdirection, the Eye of Sauron turns its gaze on Cincinnati because Maualuga disappears so quickly (that's a One Ring, Lord of the Rings reference... anyone? Editor's note: I feel ya, Josh). Don't get me wrong; when Maualuga is on, he's aggressive, nasty and quick; yet rarely all at the same time.

I have a theory. He had a knee sprain during the preseason and it may have gotten into his head with this year being a contract year. Perhaps he's thinking that since he doesn't have a contract next year and he takes another big shot to the knee, he might not have job security for next season. Problem is that he's ensuring that with his play anyway.

We like Rey and desperately want him to be that defensive leader that this team has been lacking - there's good players like Geno Atkins, Carlos Dunlap and Leon Hall, but none of them are true emotional leaders. Yet Vontaze Burfict's arrival may have become that dynamic as he develops.

4. Cast your mind back, how would you describe Dick LeBeau's time as head coach of the Bengals?

Best description is probably that LeBeau was out of his element. Players loved him, but they stopped responding. Don't forget that LeBeau was an assistant coach -- DB coach ('80-'83) and defensive coordinator ('84-91) - during Cincinnati's Super Bowl runs in the 80s, so there were deep ties here - though admittedly not as deep they've been in Pittsburgh, especially since 2004. He came back to Cincinnati in the late 90s as the defensive coordinator and was promoted to head coach after Bruce Coslet resigned following only three games.

This is a guy that doesn't want to manage a team and delegate responsibilities. He wants to develop and implement defensive schemes and coach his core defensive players. It was a mistake by the Bengals to promote him, but at the time it made sense - there really wasn't anyone else.

But no one really faults LeBeau - no one that thinks clearly at least. He just wasn't given a chance to win with Mike Brown signing aging free agents well out of their prime with drafts that, well, we'll say that they didn't work out.

5. Which would you feel more personal enjoyment: A Bengals playoff win over Oakland with Carson Palmer under center, Andy Dalton leading a 4th quarter comeback over the Steelers after a Ben Roethlisberger interception, or a 44-13 road playoff win over Baltimore?

Oh, kicking the snot out of Carson, giving him an epic bloody nose... 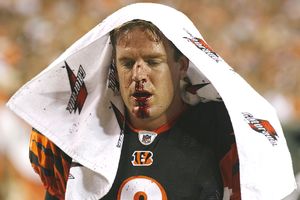 ... and reminding him of this: 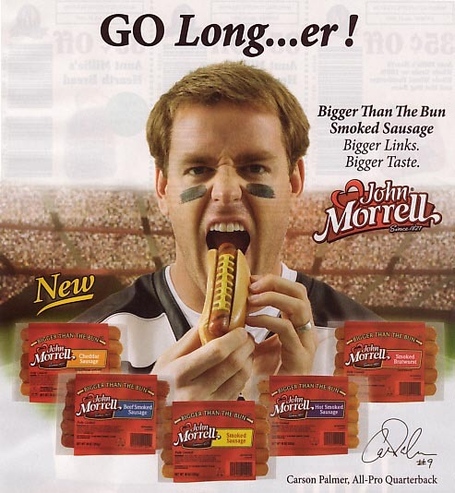 (Editor's note: absolutely dying over this pic. Thank you. A million times, thank you)

Don't get me wrong. Nothing feels better than whipping our rivals. Those games feel more meaningful after dealing with a Steelers/Ravens monopoly on the division for so long. That being said we're a little vindictive against a guy we've invested so much in, defended against (see hot dog ad above), only to turn around and say, "I'm done here. Next?"

Trust me. There's a greater peace of mind when seeing Palmer throw an interception than watching any of our division rivals lose. That being said in the scenario given above, we're in the playoffs already so we must have done something good against you guys during the season anyway.

But then everything turned out great for the Bengals. We got Andy Dalton, who is developing into a fine quarterback, plus a first-round pick this year and a second next year. Not to mention we got their head coach during the offseason. Hell we didn't even have to take them out to dinner.