Big congratulations to our own SteelCityRoller for topping the overall SB Nation leaderboard for Week 7! And get your Week 8 picks in before 8:20 p.m. tonight (kickoff for Thursday Night Football)!

Time for our weekly Pick 6 Football recap! I'm sure most of you know the drill - pick 6 players that fit under your $120 budget and the top-10 scorers will be featured here each week (click here for more on rules and scoring if you're unfamiliar). It's just some fun, friendly competition in our BTSC community so hit the link above or the banner below and jump in. Get your picks in before 8:20 pm tonight - kickoff time for Thursday Night Football. 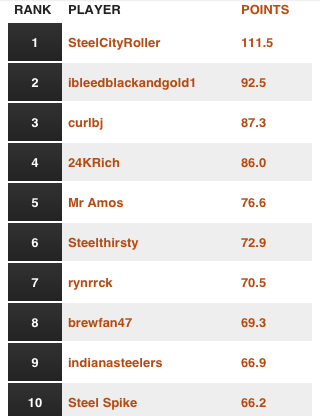 SteelCityRoller came through with a very impressive performance - not only topping BTSC's Week 7 leaderboard, but the overall one for all of SB Nation as well! Hearty congratulations to you, sir! 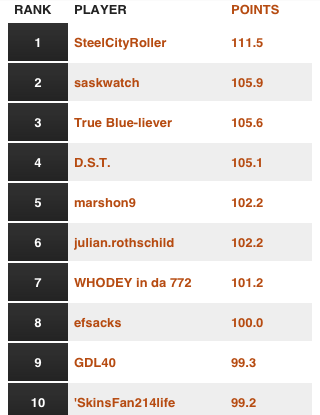 Also very impressive is that he managed to use every cent of his $120 budget to do it - I've intentionally tried to pick a satisfactory group of six without leaving any money on the table, but have never been able to pull it off.

SteelCityRoller had the top scoring running back and wide receiver, in Chris Johnson and Vincent Jackson respectively, for Week 7. Only the performance of Mike Nugent with a mere 6 points could be considered "sub-par", but that really doesn't matter when CJ is throwing down 195 rushing yards and 2 TDs for nearly 32 points.

Are you loading up on Steelers, in anticipation of the Redskins porous pass defense? Or Broncos players, since anyone and everyone is putting up tons of points against the Saints?