Next in the series of weekly comparisons of the evolution of the championship teams from the past decade, as we look at the growth (or lack thereof) of the 2012 Steelers.

It's all sunshine and roses in Steeler Nation this week, as, for the very first time ever, the four teams under consideration all won their games. Look at this lovely sight:

A closer look may reveal to the discerning fan part of the reason for this happy state of affairs, because for whatever reason the Bengals seem entirely incapable of defending their home field against the invading Huns Steelers.

And in case you're wondering, I chose the above image to remind Mike Wallace he really does know how to catch the ball. The photo is a 53-yard touchdown grab. We'd love to see more of those on Sunday.

But on to the Comments:

Ben was back from the knee injury which sidelined him the previous game. He improved to 9-0 on the road, and a record-breaking crowd at Paul Brown Stadium couldn't stop him. (The big shocker was, the crowd actually consisted of a majority of Bengals fans.) The Steelers improved to 9-2 vs. Cincinnati during the 2000s, with a point disparity of 276-167.

Carson Palmer had been playing lights out in 2005 prior to this game, and had tied Peyton Manning's NFL record of nine consecutive games with a passer rating over 100. But it wasn't his day, as two interceptions in the third quarter effectively trounced any hope of a comeback. The Bengals' unprecedented* early-season record of 5-1 took a hit, rather like the one Troy Polamalu put on his former roommate. (During the NFL era, the 1975 and 1988 Bengals began their seasons at 6-0. The 1982 Bengals began at 5-1, but this was the strike-shortened Year of the Scab, and as such isn't quite the same. Other than those years, no Bengals team has ever won more than 4 games by Game 6.)

Ever the optimist, T.J. Houshmandzadeh was quoted as saying "They won the game and I'm sure they feel like they're better than us, but I don't feel like it." Joey Porter countered with "You have to understand that we're the champions until proven otherwise." This sums up in a nutshell what the Bengals have to contend with. They don't have the mindset of a championship team—it's too difficult to win the Smack wars...

An injured Willie Parker missed a third game in a row in four weeks, as the Steelers had their bye in Week 6. Mike Tomlin's old buddy Mewelde Moore filled the breach with 120 yards on the ground, a 6.0 average yards/carry, two rushing touchdowns, and a 2-yard reception for a touchdown on the opening drive.

The game was sufficiently far out of reach by the fourth quarter to allowed Roethlisberger to sit out the final series, and Byron Leftwich garnered a perfect 153.5 quarterback rating with three completions on three attempts, including a pass to Hines Ward for a touchdown. It was the third touchdown the Steelers scored in consecutive drives in the fourth quarter. The Steelers-Bengals tally for the 21st century moved to 14-4. Oddly, three of the four losses were at Heinz Field.

In an ugly, ugly game at Sun Life Stadium the Steelers crept away with a one-point win after a rather questionable Roethlisberger rushing TD/fumble/?. This led to a Jeff Reed field goal to win the game. During the game Aaron Smith left with a torn triceps and LaMarr Woodley left with a hamstring injury. Brett Keisel was already on the sidelines. Flozell Adams went out with an ankle sprain. As I said, it was ugly. It was also hot, and naturally the Dolphins forced Pittsburgh to wear their black home jerseys. Which makes me think the "new" throwbacks might have a use, after all. If a team threatens to make the Steelers wear their home unis for a hot-weather game, Tomlin can just say "right, we'll wear the 1933 throwbacks then." I'm guessing the other team will reconsider.

Even though it was an ugly game many thought the Steelers lost, it had some great moments. None was better than the one-play drive in the second quarter. Emmanuel Sanders had a 37-yard kick return, the Steelers set up on their own 47 yard line, and a single Roethlisberger-to-Wallace pass ended in a touchdown.

There were some really great quotes from the post-game interviews. Miami linebacker Channing Crowder said "The refs called a wonderful game—for the Steelers." Ben Roethlisberger said "You hate to win it that way, but you'll take a win." But as usual the most eloquent words were from Head Coach Mike Tomlin, who asked the reporters to "Make it quick. We've got the buses warming up." He also said "We will take [the win] and exit stage left."

In the Steelers' first road victory in quite some time (it's too depressing to calculate just how long) Pittsburgh prevailed over the Bengals, despite several important starters going through the game in street clothes.

But this wasn't just a win. It was a win without major additional injuries, something the Steelers haven't seen for quite some time either. Pittsburgh is now 19-6 versus the Bengals since 2000, and 12 of those wins are in Paul Brown Stadium.

It also seems reports of the demise of Steeler football were premature, although whether it was a brief rally before succumbing rather than a resurgence remains to be seen.

After the brief and unfortunate cameo in 2005 by Tommie Maddox it's back to all Roethlisberger all the time this week. You can see why this is a good thing when you compare Maddox's 30.5 QB rating in Game 5 with Roethlisberger's 93.2 rating. And this wasn't even one of his better games.

I went back and checked my figures for 2010, as I couldn't believe 132.0 was the correct QB rating for the game at Miami. But lo and behold, it was. A quick look at the Pro Football Focus figure for the game seems more realistic—they gave Roethlisberger a 97.61 rating. But either way, the problems in the game weren't really due to Ben.

Now for some Rushing stats:

It's great to see the 2012 figure creeping upwards!

And now the Pass to Rush ratio, for Game 6: 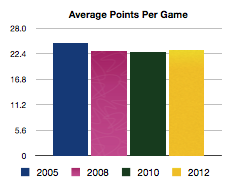 On to the Defensive Stats: 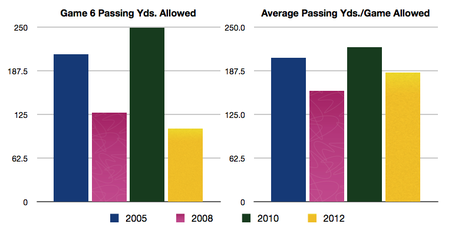 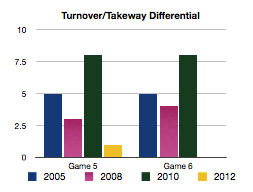 This is where this defense is really hurting. The offense is not turning the ball over at a high rate—if anything, this season they are giving it back slightly less than the average. Unfortunately, the defense is unable to get it back. It's tempting to think this will change if we ever get a fully healthy Polamalu, Harrison and Woodley on the field at the same time, and if Hampton gets back to game shape (which was always spherical.) But the reality is, that day may never again be seen. The likelihood of it decreases with each passing week, at any rate. So the more interesting calculation is, when are the young guys going to step into the breach? Possibly the best chance for the immediate future is at tackle, as Steve McLendon has looked good in each of the minute number of snaps he has gotten. How do you replace Troy Polamalu? The answer is, you don't, or at least not with career backups. So I don't really expect the 2012 number to ever compare favorably to the other seasons we are viewing. The only "good" news, if you want to call it that, is it is better than the -10 differential the 2011 Steelers had accumulated. Let us fervently hope we never again see those sorts of numbers. 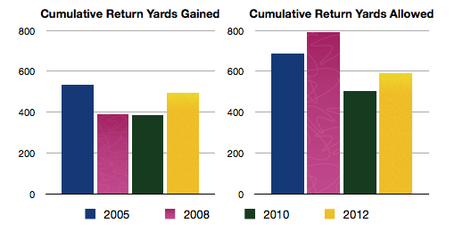 Special Teams doesn't look quite so bad when you compare it to the other teams. The pity is, if the 2012 team hadn't had so many yards recalled because of penalties (or, earlier in the season, given up,) this year's team would be awfully good. But, as my grandmother used to say, "If wishes were horses, beggars would ride." 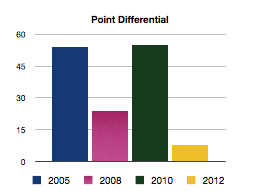 This looks considerably better than last week, but the 2012 team still has a long way to go to even make it to the standard of the 2008 Steelers. New this week, Trending: 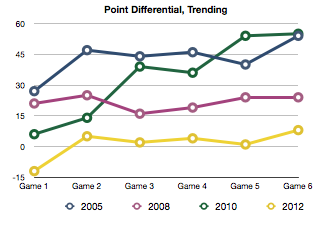 The 2012 Steelers didn't help their case by beginning the season in a 12-point hole, but they haven't let themselves get into another big one, either. Let's hope the trend continues.