How do the 2012 Steelers compare to the three Super Bowl teams of the past decade? Better each week, for the moment.

Last week all four of the teams under consideration won their games—the first time ever. This happy state of affairs does not continue this week. However, the most important W is the one the Steelers put up at Heinz Field on Sunday, so I'm not complaining. Here's the record:

Each half of the game opened with a touchdown pass to rookie TE Heath Miller. But the game was much more tightly contested than anyone expected against a 2-4 Ravens team who was missing both Ray Lewis and Ed Reed. Fortunately, the Steelers managed to keep their streak of Monday night home wins alive—they had not lost one since 1991. Ben Roethlisberger premiered his patented pooch punt, and pinned the Ravens at their one-yard line. Conversely, the usual punt duo consisting of rookie long snapper Greg Warren and punter Chris Gardocki muffed a punt (Head Coach Bill Cowher later said Warren snapped too early) and turned the ball over to the Ravens on the Steelers' 45-yard line. However, Pittsburgh managed to pull out a one-point win, moving them to 5-2 and the Ravens to 2-5.

Two important players missed this game against the New York Giants. Willie Parker was still unable to play due to a knee injury and sat on the sidelines. Santonio Holmes had been apprehended with a "small quantity" of marijuana in his car, and was suspended by the team. Mewelde Moore once again came through in a pinch, scoring from 32 yards out on the Steelers' opening possession. Things went downhill from there, as a number of defensive stands versus the Giants were unable to compensate for a Bad Ben day. Roethlisberger threw four picks, garnering a 38.5 passer rating in the process.

During the game, one of the more enduring Special Teams incidents in Steelers' history occurred. LS Greg Warren was injured, and James Harrison was pressed into duty. His snap was so far off the mark, it went through the uprights, giving the Giants a safety. I do not believe Harrison has ever been asked to long snap again.

The Steelers traveled to the New Orleans Superdome for a Halloween night game, and it was pretty scary. Although the defense held the high-flying Saints to 20 points, the offense only managed 10, on a Rashard Mendenhall 38-yard touchdown run. The only other score was a Jeff Reed 19-yard field goal. Reed also had a miss from 51 yards. Nate Washington caught a TD pass which was nullified by a holding penalty, and Roethlisberger ended the game with an interception.

The Steelers took on NFL wunderkind Robert Griffin III. As they clearly demonstrated, old age and cunning has not yet lost out entirely to youth and enthusiasm. A stellar game by the offense and an impressive effort from the defense won the day, aided by Griffin's receivers, who seemed to develop an allergy to the ball. The best stat of the game? Ben Roethlisberger was only two yards shy of RGIII in rushing numbers, with more yards/attempt. Roethlisberger rushed twice for six yards, Griffin six time for eight. Not a single touchdown was caught by the spotlighted "young money crew." Roethlisberger's three TD passes were caught by, naturally, Heath Miller, Leonard Pope, and Will Johnson. The Steelers move up to one game behind the Ravens.

Once again I will take credit for this win, as I filled my Pick 6 roster with all of the principal Redskin players. As the ad says, it's only superstition if it doesn't work.

And now to fulfill your Inner Geek, the Stats:

The 2012 version of Ben Roethlisberger has just edged himself out for the highest season average passer rating. 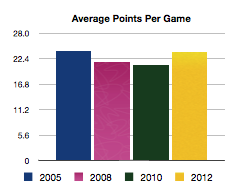 This is still extremely close as you can see, but the 2012 Steelers are pulling away from the pack, at least for the moment. 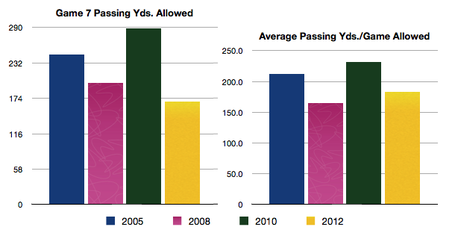 Note the top number is different for the average. The 2012 Steelers are still allowing more rushing yards than any of the other teams, but well below 100. In the meantime, the passing yards/game figure is excellent. 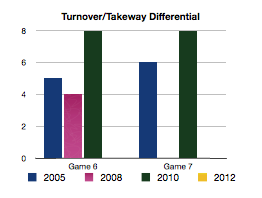 The 2012 Steelers aren't improving, but note the 2008 team has joined them at zero this week. 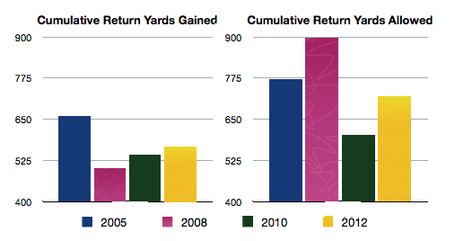 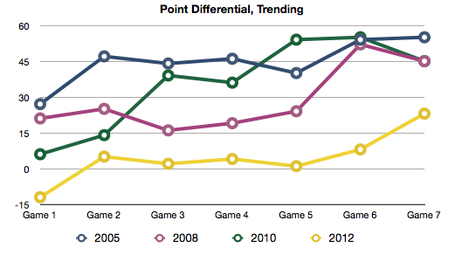 That will do it for Game 7. As always, if there are other stats you would like to see feel free to suggest them in the comments.