This week it's the AFC North Lite, as Baltimore and the Bengals are resting and recuperating.

One would have expected it to be a rather quiet week in the AFC North with two of the four teams not playing, but the teams who were playing created some seismic waves. The practically winless Browns hosted the San Diego Chargers, and the total score of the game was less than two touchdowns. This is because only one touchdown was scored the entire afternoon. Neither QB threw for a score. Astonishingly, none of the points were made by Cleveland kicker Phil Dawson.

In rainy Pittsburgh, on the other hand, four touchdowns were scored. This was also surprising, as a great many people expected this to either be an offensive shootout or a high-scoring rout by rookie quarterback Robert Griffin III. There is no doubt there should have been more touchdowns. A drop in the endzone by a wide-open Washington receiver, yet another punt return for a touchdown by Antonio Brown nullified by a special teams penalty, and what seemed like the application of the Mercy Rule toward the end of the game by the Steelers kept the score lower than it might well have been.

But first, the Record:

Baltimore still retains the lead in the division as well as the No. 2 spot in the AFC. The Texans are No. 1, New England is No. 3, and the Steelers are still part of a four-way tie for the No. 4 spot, with the Denver Broncos, the Miami Dolphins, and the Indianapolis Colts. Nine AFC teams are now below .500. To think I was astonished last week when seven teams had lost more games than they had won.

100% of the AFC North won their games this week. Next week will be another story. At least 25% of the division will win their game, but it might not be much higher than that. The Ravens play the Browns in Cleveland, the Bengals play Denver in Cincinnati, and the Steelers take on the New York Giants at the Meadowlands. Hopefully it won't be the Marshlands on Sunday.

There isn't a good deal to report on the injury front at this point. As far as I know, no one has suffered another catastrophic loss for next week, at least at this point. (The loss of either LaMarr Woodley or Ryan Clark for the Steelers next Sunday would qualify, however.) Probably the biggest news is, while Cleveland running back Trent Richardson still isn't at 100%, he ran well and scored the lone touchdown last Sunday in the Browns/Chargers game.

On to the stats. Depending on the situation, Cincinnati and Baltimore are either showing the same figures as the previous week or a blank space. 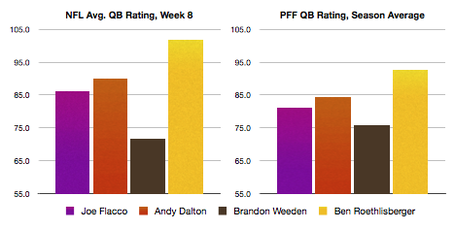 Whether you look at the NFL stats or the PFF stats, Ben Roethlisberger is pulling away from the pack for the time being. If he stays healthy, (and he has a much better chance of it, given the greatly reduced sacks he's taking this season) it bodes well for him having a career year this season. To see how everyone looks over the course of the season, here is Trending: 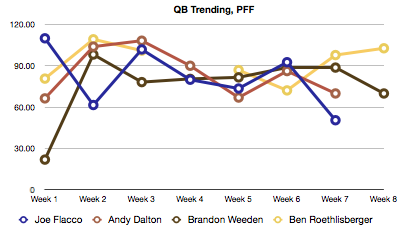 This was an interception-free week in the AFC North, albeit with only two teams playing.

On to the Receivers:

After improving a great deal for the previous several weeks the Cleveland receivers are back to their butterfingered ways. The Steelers had the second-lowest incompletion level of the season. Here are the remaining receivers (including running backs when thrown to) without a drop of a catchable pass, according to PFF. I'm limiting the list to WRs with more than 13 targets, TEs with more than eight targets, and RBs with more than five targets:

Sadly, Heath Miller finally got crossed off this list with a drop on Sunday. 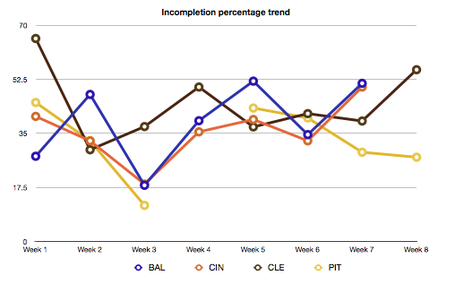 Here is a comparison for the three principal wide receivers (judged by number of targets) and the No. 1 TE. The figures will remain unchanged from last week for Baltimore and Cincinnati: 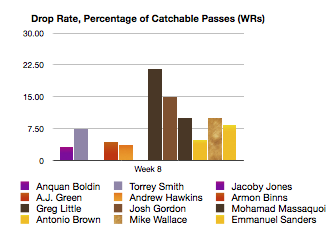 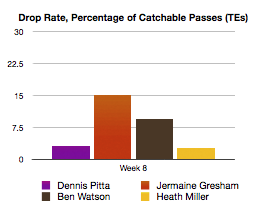 In the PFF Signature Stats Wide Receiver Rating, Mike Wallace still tops the AFC North receivers with a significant number of targets at No. 8. A.J. Green is No. 11, Torrey Smith is No. 21, Antonio Brown is No. 25, and Anquan Boldin is No. 33. None of the other AFC North receivers appear on this list of the 42 most-targeted WRs in the league.

On to Rushing. Again, the Ravens and the Bengals will stay the same as last week in the average, and won't appear in the Week 8 trending numbers: 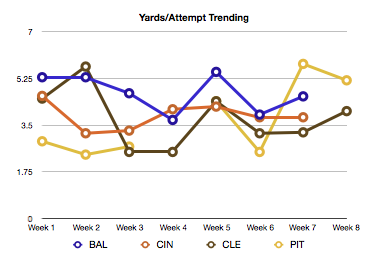 Would ya look at that!

On to the Defense:

Since I'm giving these as averages, last week's averages for the Ravens and the Bengals will stand: 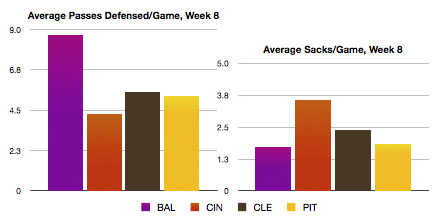 Here is the Takeaway/Turnover Differential (no change for BAL or CIN): 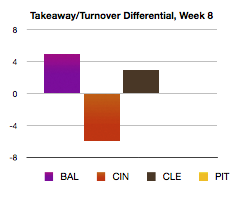 Here's a look at the trends since Week 1:

Trending charts begin at zero, and the maximum is 250.

Honestly, if the Pittsburgh special teams would quit having big gains on kick and punt returns called back by stupid penalties, this part of the game would look a lot more respectable.

And wouldn't you know it, the Steelers had yet another touchdown on a punt return called back for an illegal block in the back. Luckily for the offender, Curtis Brown, he redeemed himself elsewhere in the game. But somehow or other the special teams penalties have to quit.

The Browns' return game has taken a serious nose dive, for reasons I don't understand, since Joshua Cribbs is still returning for them. There certainly were a number of opportunities for a good return in the game vs. San Diego—there were six punts and two kickoffs. It's a mystery, I suppose. 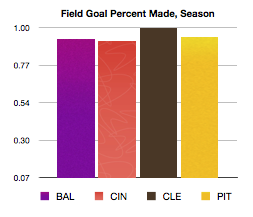 Shaun Suisham is the only kicker to actually attempt a field goal this week—he was two for two.

And now, the Scoring Differential: 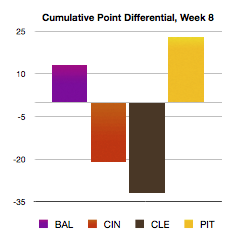 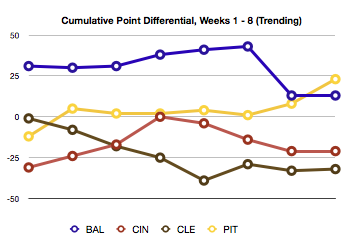 Next week should tell us a bit more about where the denizens of the AFC North are headed. If the upstart Browns manage to hold off the rested Ravens, all bets are off. If Cincinnati pulls out a win against the resurgent Broncos, it will be most impressive. ("Mr. Manning, meet Mr. Atkins...") And I don't even want to speculate about Steelers/Giants, other than to hope it is held on a field rather than in a lake. (Question—which team would be the most adversely affected?)

Don't touch that dial! Stay tuned for next week's episode of "As the Division Turns."