A statistical review of the Ravens, Browns, Bengals, and Steelers

Welcome to the Bye Week edition of the AFC North Roundup. The Steelers are a perfect 1 for 1 this week, having flawlessly executed their bye week. They did not show up for a game on the wrong date, none of the players were arrested, which is commendable in 2012, Year of the Mug Shot, and so far this week even James Harrison has not received one of those FedEx packets from Roger Goodell. Now let us hope we will see some flawless execution this coming Sunday.

But what about the other three teams? There's plenty of interesting facts and figures to look at, so let's get right to it. Here's the record:

The AFC North ranking did not change this week, with Baltimore and Cincinnati tied for the number one spot and Cleveland in firm control of last place. I really wish someone would get Brandon Weeden a few receivers. Or at least when they aren't playing Pittsburgh.

Now for the usual stats, beginning with the BMOC, the QBs. Like I did last week, I'm first giving the average of the four QB ratings for each player, with, naturally, the exception of Ben Roethlisberger, whose average is the same as last week: 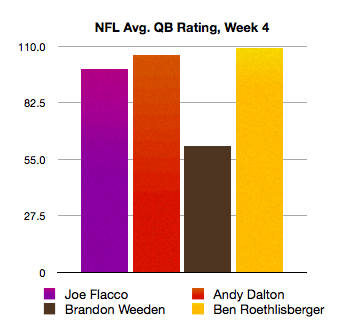 Next is the Pro Football Focus QB rating, which removes spiked passes, dropped passes, and so on to give a more accurate measure than the NFL rating: 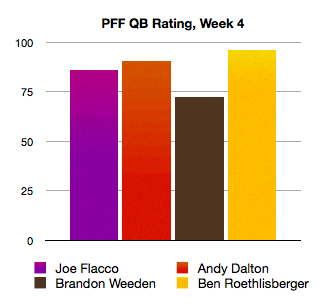 The Pro Football Focus rankings for the QBs are:

Now let's look at how many of the passes they are throwing out there aren't connecting: 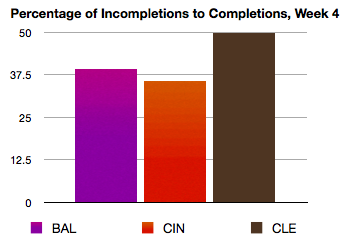 This rate is far worse for all three teams. Last week the Browns had a 37% incompletion rate—compare this to Week 4's stunning 50% incompletion rate. Both the Bengals and Ravens were around 18% in Week 3, and in Week 4 you can see Andy Dalton did not complete over a third of his passes, and the Ravens were close to a 40% rate. But is this about the QB or about the receivers?

Pro Football Focus analyzes incomplete passes and determines which of them were "catchable" balls. Last week the Ravens had not had a single receiver who had dropped what PFF deemed to be a catchable ball, and the rate for the Bengals and Steelers was very low. Let's see how it looks this week:

There are still a whole lot of receivers who have not dropped a catchable pass yet this season, although some of these receivers have only been targeted a few times. Once again it makes more sense to see who isn't holding on to the ball. This week I realized the RBs should be on here too if they are being targeted and missing any catches, so they will debut this week:

So my question is, if the only players dropping Joe Flacco's passes were the running back and the fullback, and if they have dropped two passes between them so far, how is it Joe Flacco has such a high percentage of incompletions this past week? I guess we have to put some of this down to the awesomeness of Cleveland's secondary... Meanwhile, if you look at how many of the Browns receivers (basically, all of them) are dropping catchable passes, it is no wonder PFF gives Brandon Weeden a considerably higher passer rating than the official NFL number.

But enough speculation—let's have a look at the rushing numbers for Week 4. I'm looking forward to this, as I don't have to be depressed by Pittsburgh's poor showing.

Here is the figure for Average Yards per Game in four games: 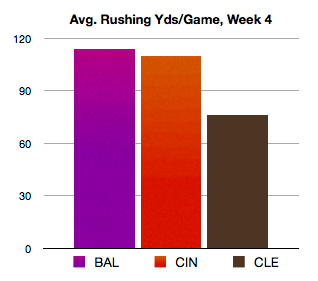 And now Average Yards per Attempt in four games: 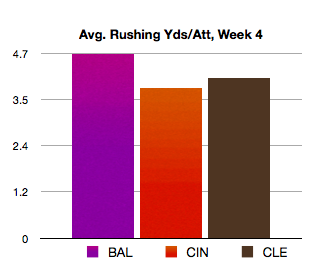 I've been giving the NFL defense ranking, which is automatically set for yards per game allowed, and the Steelers have been showing up as rather better than they ought. So from here on out I'm going to average the yards per game and points per game ranking to get what is hopefully a more realistic number. Which is a pity, because Pittsburgh is up to No. 5 this week in yards allowed : )

Here are the figures for Passes Defensed and Sacks, and I'm going to average them from here on out, because otherwise they won't be realistic until all the bye weeks are done:

And here is the difference between total takeaways and total turnovers: 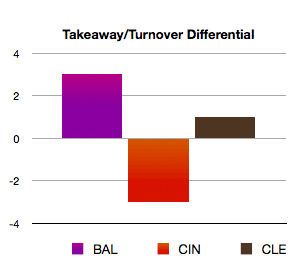 I wonder why a defense generating as much pressure as the Bengals are getting isn't taking away more balls. Their offense/special teams are turning the ball over, but not hideously—they have seven turnovers in four games—but the defense just isn't getting the ball, or, more precisely, an average of only once per game. Not that Pittsburgh has much room to talk, but then Pittsburgh isn't generating a lot of pressure thus far, unlike the Bengals, who lead the league in sacks, with 17 total.

The Browns are still the champs in this category, gaining nearly twice as many yards as they are giving up, although admittedly they are the only team to have given up a ST touchdown. I think the Browns may have the best placekicker as well - Phil Dawson's three field goal attempts last Thursday night were all from over 50 yards, and he nailed them. All teams but the Ravens still have a 100% rate on field goals attempted/field goals made, but BAL's rookie kicker missed a 47-yard attempt last week, for an 87.5% success rate.

It seems odd to speak of a "must-win" game for a team when it is the fourth game of the season, but for the Steelers Sunday's match vs. the Eagles is generally considered to be just that. Will the Mayan apocalypse descend if they lose? Possibly not, but their chances of regaining their standing in the AFC North will be that much more difficult.

The Browns have played tough this season, but unfortunately for them the teams they have played have been a bit—well, not tougher, exactly, but able to score more points. One-dimensional is one-dimensional, whether you are one-dimensional because you can't run the ball or because you can't pass it. Pittsburgh has the advantage that it is getting some needed players back, while Cleveland seems to have lost some of the reliable receivers they did have. Get well soon, Josh! (Cribbs practiced partially on Wednesday; neither Mohamed Massaquoi nor Travis Benjamin practiced.)

And this makes me think it might be interesting to look at the scoring differential for all of the teams. Here it is:

The results for Baltimore and Cincinnati are somewhat deceptive because the first game was between the two teams, and BAL won by 31 points. Since then BAL has won by 1 point twice and by a touchdown last Thursday. Cincinnati has spent the ensuing three weeks digging itself out of the 31-point hole. Cleveland, in the meantime, is losing by an average of less than a touchdown for each game, and Pittsburgh, despite losing two out of three games, is still in a positive point differential. In the end, it doesn't matter, as there are no brownie points for close losses or demerits for close wins, but I think it is interesting to track anyhow.

All of the AFC North games this week are on Sunday at 1:00 pm. I'm not sure how this happened, as I thought BAL was under contract to play in prime time every week this season. We wouldn't want to miss all those great shots of Ray Lewis on Sunday Night Football, after all.

Steeler Nation should have a better idea of where the 2012 Steelers are headed about 4:30 on Sunday. Baltimore is playing a not-very-impressive KC club, although admittedly at Arrowhead; Cincinnati is is playing a not-very-impressive MIA club at home, and the Browns are playing the Defending World Champion NYGs in New York. It looks like the rich are going to get richer and the poor poorer this weekend for the rest of the AFC North. But then, any given Sunday and all that...