A Comparison of the 21st Century Steelers Super Bowl Teams

A Comparison of the 21st Century Steelers Super Bowl Teams with the 2012 Steelers, Week 3

Share All sharing options for: A Comparison of the 21st Century Steelers Super Bowl Teams

This is the week I'm actually catching up to the present times, thanks to the early bye week. Comments to the previous two articles, especially after the Oakland game, have been along the lines that this year's team might be better compared to 2009 or 2003 than to the Super Bowl clubs. But the point isn't to imply this team is going to the Super Bowl this year, although anything can happen, I suppose, but to look at the evolution of the style of play from the end of the Cowher era (and Ben's early years) through the Tomlin era and Ben's maturation as a QB. The Super Bowl teams were nicely spaced through these years. Furthermore, as a glance at the Record section will show, even a Super Bowl bound team can look pretty wretched at times.

And in case you're wondering why I chose a picture of Jeff Reed, it is in honor of him scoring the sole points in the 2008 game in Philadelphia...

So without further ado, here are the numbers:

It is interesting to see the only 3-0 team was the 2010 Roethlisberger-less club. I think a look at some of the other numbers from this week in each season will also be instructive.

New England, who was depleted by injuries to key players both before and during the game, trailed until partway into the fourth quarter. Ben came back with a touchdown pass to Hines Ward at 1:41 on the clock, tying the game. Unfortunately, 1:41 was enough time for the uber-annoying Tom Brady to get close enough to the Steelers' end zone for Adam Vinatieri to win the game with a 43 yard field goal. Jeff Reed missed a 52-yard attempt, ending his streak of 21 consecutive field goals made. Randle El threw away a 49-yard gain by tossing the ball to Hines Ward as he was about to be tackled. The only problem was, a Patriot actually grabbed it instead. Fail...

The sole Steelers points achieved in this inter-conference slugfest versus the Philadelphia Eagles were two Jeff Reed field goals. Although SuperTroy made an appearance with a diving interception the NFL deemed a "don't-miss play," the Steelers once again only managed to punt it back to the Eagles. The odd score is because of a call of intentional grounding on Roethlisberger in his own end zone which gave the Eagles a safety. He left the game shortly thereafter when his hand got stepped on, and Byron Leftwich finished the game. The Steelers were finished before Leftwich took over, however.

In Charlie Batch's first start since the 2007 season he silenced the "Old Man Batch" critics by throwing three touchdowns. Brett Keisel joined the fun with a 70-yard interception return for another touchdown, and Rashard Mendenhall also ran for a touchdown. The pundits who had written off the Roethlisberger-less Steelers at the beginning of the season were left looking rather foolish, and the Steelers were left with a 3-0 record. Wouldn't it be nice if Rashard and the Diesel were to reprise their roles in this Sunday's game? I'm certainly hoping Sunday will be more like this than like the 2008 Eagles game...

We've analyzed this game at great length. The takeaway is, Ben is playing like a champion, but a running game and a bit more help from the defense are going to be necessary to get this team to the playoffs, or even a winning record.

Now let's see how each team got to where they are now. The numbers mostly speak for themselves, but I'll throw in a few comments anyhow : )

It's interesting to me to see the most effective running game so far was during the season the Steelers were not expected to be a passing threat. I wonder what this means, if anything? 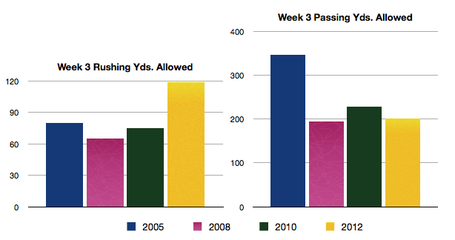 This year's Steelers defense is not at the level of the 2008 team, but it is surprising good against the pass, comparatively, at least. Of course, if teams are scoring eventually, that's cold comfort... 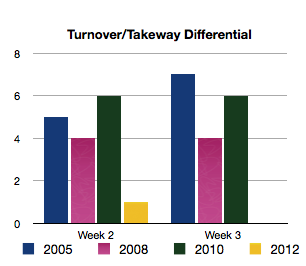 This is always cumulative, so the Week 2 figures are Week 1 plus Week 2, and the Week 3 figures are the total of all three weeks. Thus the 2012 club had one more takeaway than turnover during Weeks 1 and 2, but lost two balls and only took one away in Week 3, taking the sum total back to zero. On to Special Teams: 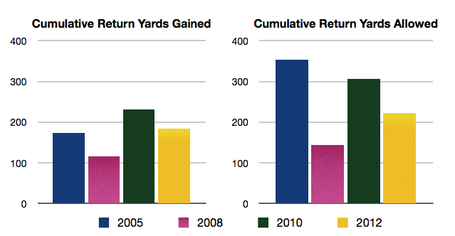 It is interesting to note Special Teams have not been a strength of any of these teams—so far, at least, the 2008 team was the best. As we all know, the 2009 Special Teams were, in a sense, the nail in the coffin of the season. It would be interesting to know why, since there have been four different STs coaches during this time: 2005—Kevin Spenser, 2008—Bob Ligashesky, 2010— Al Everest, 2012—Amos Jones. Odd, that. 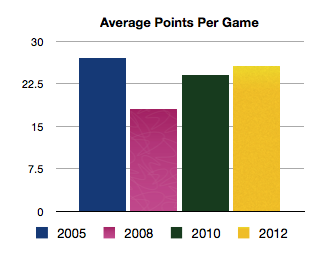 And finally, new this week, the Point Differential for each team (i.e. points made vs. points given up:) 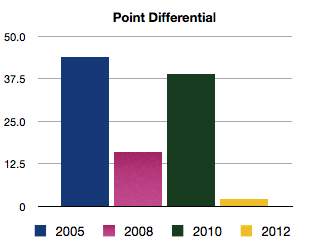