It's Game 4 rather than Week 4 now as the bye weeks start to mess things up. We will continue exploring the evolution of the Steelers through looking at the Super Bowl teams of the 21st century and this season's club. Compared by individual games, one can't necessarily see trends or make judgments, but as the numbers accumulate through the season it will be interesting to see how these teams round into form, and what that form is. Let's begin as usual with the record:

Before I begin with the 2005 comments, I want to throw out a quote I found interesting:

"He laid it on the line," receiver Hines Ward said of [his] quarterback. "He's lying there hurt on the ground, and he said to me, 'At least we're in field goal range."

[The Steelers head coach] had no information on the exact nature or severity of his QB's injury.

"It looked bad from what I saw up on the screen," he said.

Roethlisberger, whose knee was bent back awkwardly on the hit, was driven off the field on a cart.

Roethlisberger was replaced by Charlie Batch, who has played only a handful of downs the last [few] years.

I know many of you have what seem to me to be photographic memories about past games, and I'm sure you'll remember when the above incident occurred. It was near the end of the Steelers/Chargers game, and Batch handed off to Bettis three times to get in better field goal position. The Steelers then won a game they were trailing by one point.

I threw in the quote, though, because the description of the injury was so similar to the one Ben incurred in the Cleveland game last December. Clearly last year's high ankle sprain was much more serious than the Luis Castillo-inflicted knee injury, however, and Castillo considerately waited until the game was almost over to take out the QB.

This game was Bettis' season debut, as he had been out with an injury since the beginning of the season. The opposing quarterback in this game was none other than Drew Brees in what turned out to be his final season in San Diego.

The Steelers played the Ravens at Heinz Field on Monday Night Football. A number of starters were injured, most notably Willie Parker, Casey Hampton, and Brett Keisel. The game was both Rashard Mendenhall's first NFL start and the last game he would play in the 2008 season, thanks to a broken shoulder, courtesy of the Ravens. With Willie Parker not dressed, Carey Davis ran the ball for a while, until he left with a sprained ankle, and it was up to Mewelde Moore to provide the entire stable of running back. The other victim that evening was Kendall Simmons, the right guard, who sustained a season-ending Achilles injury.

The offense was so bad, dating back to the previous two games, the fans at Heinz Field actually booed them at one point. They finally got something going in the second half when Roethlisberger ran a no-huddle offense late in the third quarter. The defense helped out with a fumble forced by James Harrison which was returned seven yards for a touchdown by LaMarr Woodley.

The game was Pittsburgh's 14th consecutive win on Monday Night Football, dating back to 1991.

The final Roethlisberger-less game of 2010 did not go as smoothly as the previous one, and I expect most of you will remember it was a Steelers victory—at least until the last 34 seconds of the game, when Joe Flacco shot a TD pass to T.J. Houshmandzahdeh. It was Flacco's first win in Pittsburgh. In what sounds unfortunately too familiar, a couple of penalties on the Steelers kept the Raven's chances alive during the waning minutes of the game, and they capitalized on them.

It was a typical low-scoring, brutal affair, the fifth consecutive regular season game between the two clubs decided by four points or less. In what was the beginning of the end for kicker Jeff Reed, he missed not one but two field goal attempts, a 49 and a 45 yarder. This gave him four misses on the season, the same as the entire number of attempts he missed for all of 2009.

Rashard Mendenhall. That's all I have to say. Although if pressed I will add Lawrence Timmons.

Let's look at the stats now:

Average Points Per Game as of Game 4: 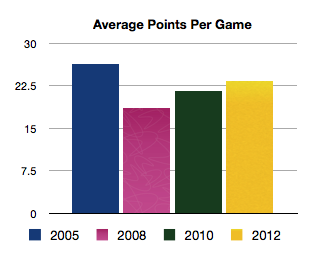 I had this near the end of the article last week, but it's an offensive stat, and really belongs up here.

It's pretty exciting to finally see the 2012 club have at least a single game with a respectable rushing average... 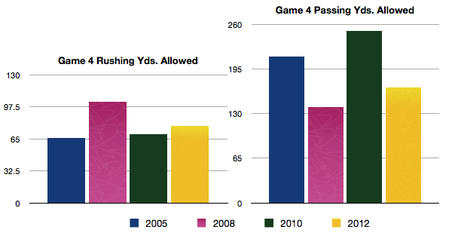 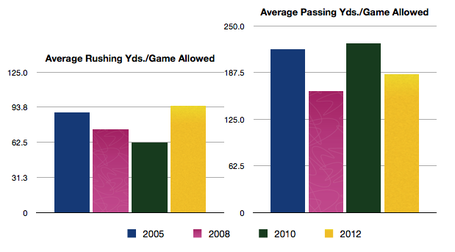 Despite the very tenuous feel of the 2012 defense, they don't look absolutely terrible against the run, at least by comparison, and look quite good against the pass. 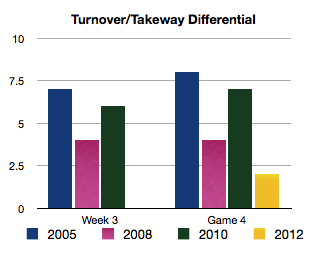 Yeah! The 2012 Steelers are finally on the board! And, unlike the 2011 Steelers, they have not, at least so far, dipped into the negative side of things... 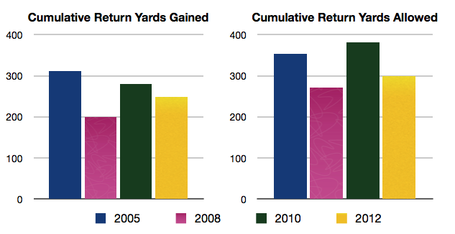 The Special Teams have been ever-so-slightly inching towards respectability this season. Although they are still giving up more yards than they gain, the difference is getting smaller. I am still mystified as to how the Steelers have not, under four different coaches, found a way to reverse the equation.

The amazing 100% figure for 2010 omits the critical information that there were two botched FG attempts. Maybe this chart ought to somehow or other include the number of trips to the red zone, with or without points. I'd have to figure out how to do that, though...

The Point Differential (the cumulative total of the points given up subtracted from the total points made.) 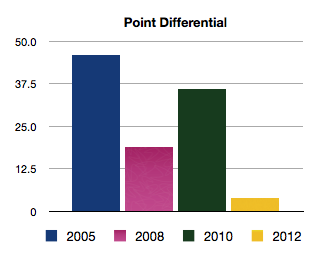 That's all, folks. If you're interested in the previous articles, here are links to them: