Congratulations to CheekyMonkey for edging out SteelCityRoller to win Week 8! And get your Week 9 picks in before 8:20 p.m. tonight (kickoff for Thursday Night Football).

Time for our weekly Pick 6 Football recap! I'm sure most of you know the drill - pick 6 players that fit under your $120 budget and the top-10 scorers will be featured here each week (click here for more on rules and scoring if you're unfamiliar). It's just some fun, friendly competition in our BTSC community so hit the link above or the banner below and jump in. Get your picks in before 8:20 pm tonight - kickoff time for Thursday Night Football. 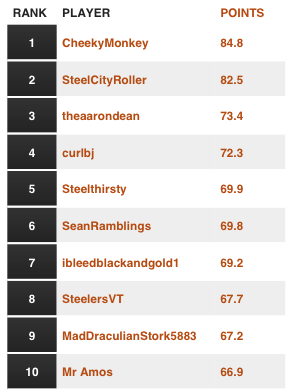 Congratulations to CheekyMonkey, and with his Week 8 win, he also becomes BTSC's second multi-week winner (also topped the leaderboard in Week 5)!

Now, do you want to see something interesting and oh-so-close disappointing?

First four players = identical. Then both kickers put up 10 points. The 2.3-point margin of victory was the difference between Nate Washington and Josh Gordon in the wild card spot.

Tough, tough break for SteelCityRoller for coming so close to winning consecutive weeks (would've been a first for BTSC).

Are you loading up on Steelers and whoever is playing against the Saints? It's proving to be a pretty sound strategy lately.