In which the Steelers take the ultimate injury hit, and Baltimore rejoices.

Last week I wrote the following:

Injuries are always a wild card in any season, and the AFC North has suffered injuries a-plenty. But it's a war, not a battle, and the war can still be won by teams with sufficient quality back-ups to jump into the breach and take over for the injured starters.

Because of a quirk in the NFL scheduling, the first of the Ravens-Steelers games occurs on Sunday. This time last week, the Steelers and the Ravens had separated from the pack, and it was assumed this game would clarify the divisional picture a great deal.

I'm guessing the vast majority of NFL fans who give it any thought at all feel the picture is now clarified sufficiently, and Baltimore is being awarded the division crown with seven games left to play. The majority of NFL fans may be correct, of course. I can only hope the Ravens feel equally confident.

But, like Mike Tomlin, I'm not going to live in the world of hypotheticals at the moment. Instead, I am going to look at what is in the books for Week 10.

All of the AFC North teams have now played nine games. The Browns finally had their bye week, and so did not play. Therefore their numbers won't have changed from last week. Trent Richardson, who now appears on the injury reports with three different injuries, will have had an extra week to heal. Since he is a critical part of the offense, I'm sure Browns fans are hoping it helped.

In one final bit of news, I read this item from the Baltimore Sun. In my Week 6 AFC North Roundup, I reported the injury to Ray Lewis, and commented:

...he may be the "heart and soul" of the Ravens' defense, but you can bet your booties he'll be on the sidelines for every single game, screaming at guys, and the television cameras will lovingly play over the scene each and every time.

The Baltimore Sun item linked above states "Ray Lewis not expected back in Ravens' building in near future." To my surprise, I read Lewis has had his surgery and is rehabbing in Florida. This is in stark contrast to Steelers' superstar Troy Polamalu, who is an oft-photographed and commented-upon presence on the sidelines at every game. While his style is nothing like Lewis', Polamalu is watching every snap and relaying the information he gathers to the defense. Although his on-field presence is greatly missed, I believe he is bringing great value to the team from the sidelines. Former RT and current LG Willie Colon spent the past two seasons on IR—and on the Pittsburgh sidelines. He was at team meetings, acted as an extra coach during training camp and during the season, and thus, in my opinion, was probably in much better mental shape to make the transition to guard during the 2012 season. Colon signed a big contract extension just before he was injured in 2010, and had job security. He could have disappeared for the season both years, but chose to stay and support his team.

I guess Ray got the memo, because he's back in Baltimore. Or he was. He made a surprise visit, gave a speech before Sunday's game, and headed back to Florida. I'm glad to know I have such power. Ray Lewis is probably glad to know he hasn't lost his touch, either—the Ravens ran out of the tunnel and put a team-record-breaking 55-20 beat-down on the Raiders.

The Bengals also found renewed energy and enthusiasm, and beat the New York Giants 31-13 in Paul Brown Stadium. A.J. Green seems to go from strength to strength. Marvin Lewis has avoided the abyss as deftly as ever.

The Steelers played the Kansas City Chiefs on Monday Night Football. Craig Wolfley commented, "The Chiefs kicked off at 8:40. The Steelers showed up about 9:20." The game began without the Steelers' No. 1 wide receiver, No. 1 running back, or DPOY strong safety. It ended without their quarterback. And yet the Steelers did eventually prevail.

Unfortunately, nobody gives you any credit for winning, barely, over a 1-7 team. It's entirely possible next week's roster will look similar to where Monday's game ended up, including the possibility of playing without FS Ryan Clark, who was concussed for the second time in three weeks near the end of the game. And yet the Steelers-Ravens game will still be played, as far as I know. No statement has been made by Mike Tomlin conceding the game to the Ravens.

But let's look at the numbers to this point in the season. It is with a heavy heart that I begin as usual with the Passer Comparison: 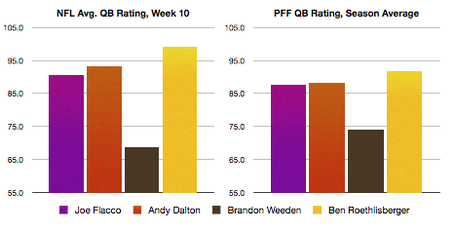 After a weak showing in their previous game both Joe Flacco and Andy Dalton came roaring back in Week 10, with Dalton receiving the best QB rating in the division. It will be interesting to see whether they continue to make up ground in the coming weeks. 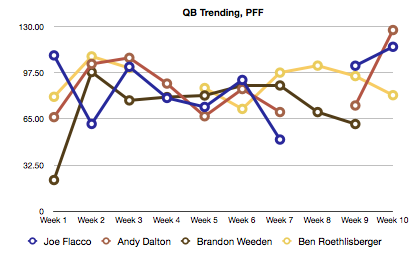 I guess for the foreseeable future I'll just add Leftwich or Batch or Shaun Suisham or whoever ends up being the Steelers' quarterback for that week... 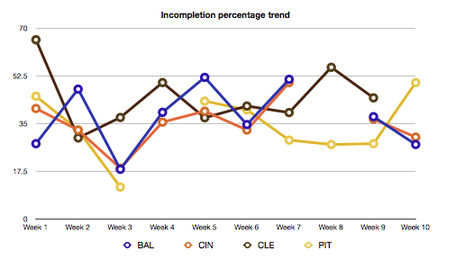 Pittsburgh played a sloppy game, no doubt about it. Baltimore and Cincinnati both had stellar games from the standpoint of apparent drops. But let's look further into this whole drop thing. Are there any receivers left in the AFC North with a reasonable number of targets who haven't dropped a catchable pass according to Pro Football Focus? Well, yes, and here they are. (A "reasonable number of targets" is a wide receivers with more than 19 targets, a tight end with more than 12 targets, or a running back with more than seven.)

That's it. Even Isaac Redman, The Most Interesting Running Back in the World, had a drop in Week 10. Oh well. Here's a comparison of the current drop rate for the three principal receivers by number of targets. (Note the Steelers' Antonio Brown has been replaced by Jerricho Cotchery, since Brown is out for the moment:) 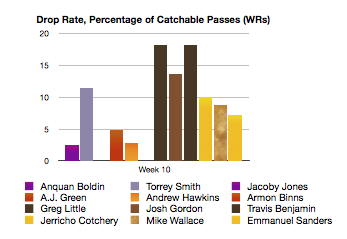 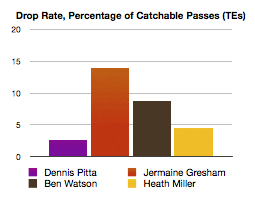 Cincinnati is still the king of the hill in terms of wide receiver hands. (TEs, not so much.)

Let's move on to Rushing.

Here's something most of us never thought we would see this season—the Steelers have edged out the Ravens for highest average yards/game (105.2 to 104.9.) 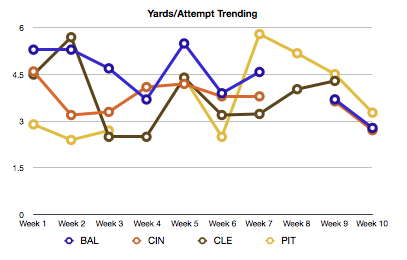 Astonishingly, despite the fact Pittsburgh gained less than 100 yards in their Week 10 game, they still beat out both the Ravens and the Bengals in yards as well as yards/attempt. I sure wish they had rushed one more time, though, whether they gained any yards or not—on third and 4, 14:06 in the third quarter. Isaac Redman gained six yards on second and 10 in the previous play. Of all the words of tongue or pen, the saddest are "It might have been." Or Ben...

NFL Ranking: (In which I average the NFL rankings for Average Yards/ Game Allowed and Average Points/Game Allowed):

While the Steelers moved up one slot in the rankings, the rest of the AFC North moved up as well, none more than the Ravens, who moved up four slots. This is not good news for a Steelers offense who will be hoping to drop a bunch of running yards on Baltimore this coming Sunday.

In the category of Splash Plays the Steelers are still lagging behind, however. I'm guessing if they don't step it up it is going to matter more in the coming weeks.

Here's how the AFC North shakes out: 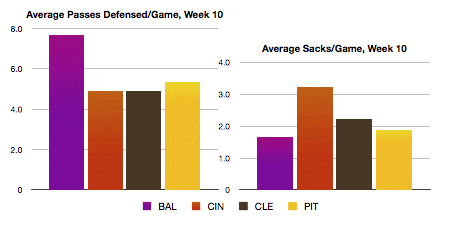 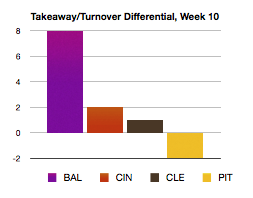 Cincinnati has, most impressively, crawled out of a -7 hole they had dug for themselves by Week 6 and are in the black. The Steelers continue to trend downwards. This is not good... 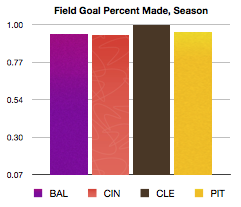 The AFC North kickers continue to be money. The importance of this is demonstrated by noting the Chiefs may well have won in regulation on Monday night if not for a miss of a 33 yard attempt by their kicker in the third quarter. I guess the kicker isn't quite as critical when you are winning by 35 points, although naturally you will take the opportunity to run a fake field goal play anyhow. I expect the Raiders aren't bitter about that, any more than the Steelers were after a similar play in a game they were losing by a large number of points. Coincidentally, they were losing to the same team the Raiders were playing. 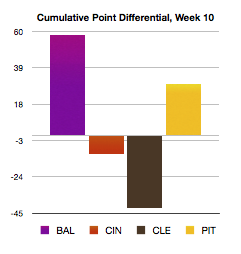 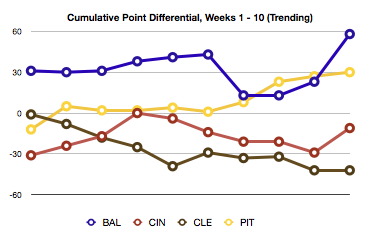 As you can see, after an exciting couple of weeks when the Steelers moved into first place in scoring, the Ravens are back to their old tricks. Those numbers will diverge Sunday, one way or the other. In the meantime the pesky Bengals are moving up in the world, although they still aren't into a positive number.

Well, that will do it for the "Mass Mourning in Pittsburgh" edition of the AFC North Roundup. Join me to see what happens to the numbers in Week 11.