Last week all four teams won their game. This week things are reverting to the average...

Share All sharing options for: A Comparison of the 21st Century Steelers Super Bowl Teams: Game 9

The passer ratings for the five quarterbacks is:

Here's how the article about this game on NFL.com begins:

PITTSBURGH (Nov. 13, 2005) -- For many NFL teams, all these quarterback injuries might ruin a season. The Pittsburgh Steelers simply plug in another player and keep winning.

Ben Roethlisberger was still out due to an injured knee, as was James Farrior, the runner-up for the 2004 Defensive Player of the Year. During the game Hines Ward became the team career receiving leader with 543 receptions, passing John Stallworth. Charlie Batch played well in the first half of the game after a rough outing the week before, but injured his hand and was replaced by Maddox in the second half. The only quarterback to throw for a touchdown was Randle El. The other three touchdowns were runs by Verron Hayes, Jerome Bettis, and Charlie Batch.
Talking about the injuries, Tommy Maddox said:

Everybody bellied up to the bar and the Steelers put 34 points on the board to beat the Browns in the 10th of their last 11 games vs. the Steelers. The NFL article comments the Browns lost "amid a familiar story line: not enough offense." Some things never seem to change.
2008:
After being replaced by Byron Leftwich due to a knee injury in the week before, Ben Roethlisberger was back. The Steelers went to the locker room with a 17-14 lead at half-time. Mewelde Moore continued to prove his worth with two scores in the game. The Colts came roaring back in the second half, and although the Steelers got the ball, down four points, with three minutes left to play, they couldn't score, falling to the Colts. The telling comparison: Peyton Manning threw three touchdowns with no interceptions. Ben Roethlisberger threw three interceptions with no touchdowns. Not a recipe for success.
2010:
I was at Heinz Field on a bitterly cold night for this game, and it was just weird. Jeff Reed completed his season-long meltdown, missing a 26-yard field goal attempt. The Patriots' kicker missed an extra point, and the Patriots failed on a 2-pt. conversion attempt. On the other hand Pittsburgh made two two-point conversion attempts, both taken in by Mewelde Moore. Young Money was money that night, with Mike Wallace scoring twice and Emmanuel Sanders once. It wasn't nearly enough, though. What made it maybe the worst birthday present ever was watching Rob Gronkowski score three touchdowns. A pick six of Roethlisberger put the final nail in the coffin.
2012:
I won't go through the depressing events of Monday night, other than to say I'm thankful Ben's shoulder injury was bad enough to force him out of the game. I'd rather have an injured quarterback than a dead one.

(I forgot to note that the QBs for the 2005 game this week were both Batch and Maddox.) The 2012 version of Ben Roethlisberger is still king. Not that it will do any of us much good. But the situation makes it all the more interesting to see how the teams did without Ben in years past. Last week I started a feature, "Just Ben," comparing only his stats from the four seasons. Here it is for this week, but I suppose it's pointless for the near future:

But rather than brood, let's continue on to the total offense stats:
Passing Yards:

Despite not having a great week the 2012 Steelers are still beating out the 2008 team in average rushing yards per attempt.
Pass/rush ratio, Game 9: 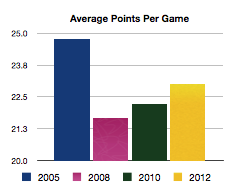 The 2012 Steelers are still firmly in the lead against every team but 2005. However, the main thing is to keep putting up more points than your opponent... (Note the chart begins at 20, as the differences are hard to see otherwise.)
Now for the Defense:
Pass Defense: 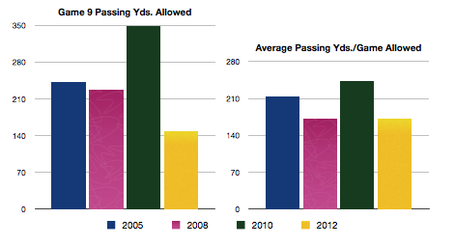 The rush defense isn't as good as the other years—there is no doubt Aaron Smith and James Farrior were a huge part of that. And of course the 2010 team was historically good. This week was the first game they allowed more than 75 rushing yards to a team. This week was just the second game the 2012 Steelers allowed 100 yards or more rushing. Unfortunately it was quite a few more. And Jamaal Charles just hit 100 yards on Monday. I believe that is the first individual rusher the 2012 team has allowed to gain 100 yards. So while the 2012 team isn't as amazing as the other three, it is more than respectable.
Takeaway/Turnover Differential: 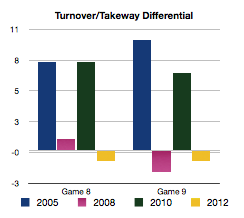 Although it is scarcely what one would like to see, at least the 2012 team is holding steady. 2008 and 2010 both took a step back in their losses—2005 took a big jump forward.
Special Teams: 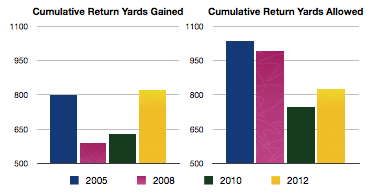 Strangely, the 2012 team is the best in yards gained and second best in yards allowed. Think how it would look if not for all the penalties early on...
Ratio of Field Goals to Touchdowns:

This is a big area of weakness for the 2012 team. It's surprising the Average Points Per Game is as close as it is, given the large portion of their scoring coming via field goals. It makes one all the more thankful Shaun Suisham has been so reliable.
Point Differential: 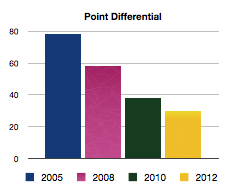 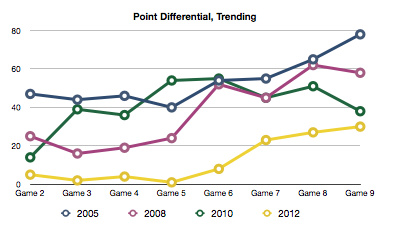 Well, at least it is still headed in the right direction. Come back next week and find out whether the 2012 Steelers can still hang in there with the big boys, or appear to be has-Bens...