AFC North Roundup, Week 11: Who's Left to Be the Next Man Up?

It isn't just the Steelers dealing with injuries in the AFC North, although the Steelers have lost the largest number of significant players. Will injuries alter the balance of power in the division?

Share All sharing options for: AFC North Roundup, Week 11: Who's Left to Be the Next Man Up?

Let's get the Record out of the way:

The Browns returned from their bye week to play the Dallas Cowboys at JerryWorld. And to the astonishment of most of America, America's Team was losing at halftime, 0-13. But although the Browns managed to sack Tony Romo seven times and force a fumble, the Cleveland receivers still seem incapable of hanging onto the ball. The game was won in overtime by a Dallas field goal. Next week they play Pittsburgh.

The Bengals, meanwhile, had to travel to Arrowhead Stadium, once one of the most feared in the NFL because of the enormous decibel level generated by the enthusiastic fans. It was only about half full on Sunday, though, and many of the Chiefs fans in attendance were wearing black, a fan-driven movement to pressure the ownership to clean house.

Although the Chiefs managed to take the lead early, a 32-yard run by Cedric Peerman on a fake punt swung the momentum to the Bengals, for good. A greatly re-invigorated team returns to Cincinnati to host the Raiders.

Now for the walking wounded. This season's first tilt between the Ravens and Steelers began with a list of inactive players and/or those on injured reserve which could staff a Pro Bowl game almost by themselves. Among the injured players were former Defensive Player of the Year winners, perennial Pro-Bowlers, and recent top-round draft picks. For Pittsburgh, this included:

On injured reserve: The Steelers' 2012 first-round and third round draft picks and the 2011 second-round pick.

For Baltimore, the injured included:

During the game, the toll mounted, as almost always happens during Ravens-Steelers matches. The Steelers lost running backs Isaac Redman and Baron Batch and wide receiver Jerricho Cotchery. Quarterback Byron Leftwich sustained both a shoulder injury and broken ribs at various (disputed) points in the game. DE Ziggy Hood left with an injury I had never heard of, something which is becoming all too common this season, a lumbar sprain. The Ravens lost favorite Flacco target tight end Dennis Pitta. In a defensive battle where neither team could muster much of any offense (although perhaps the Steelers had the better excuse,) the difference in the game was a punt return for a touchdown by Ravens returner Jacoby Jones.

The Ravens limp off to the west coast to take on the imploding Chargers; the Steelers travel to Cleveland to take on an improving Browns team. The Steelers will do so with their third quarterback in three weeks—37 year old Charlie Batch.

Let's see how the AFC North passers fared in Week 11: 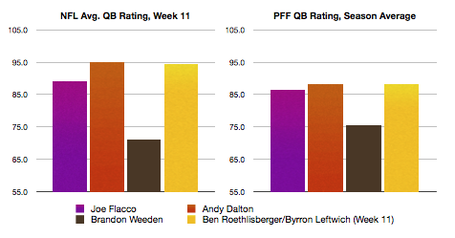 The Benless Pittsburgh passer rating is already taking a big hit, and Andy Dalton has pulled into the lead in the NFL season average rating. (Dalton and Pittsburgh are tied at 88.2 in the Pro Football Focus average rating.) Have a look at Trending: 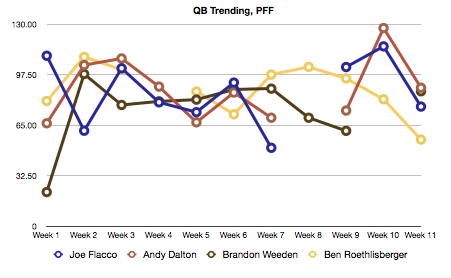 The Byron Leftwich experiment was not particularly successful, although to give the man his due he came in and played cold during the latter half of the Chiefs game (Week 10.)

Looking at the chart, one can see Joe Flacco has been wildly inconsistent this season. A comment made by one of the denizens of this site about the difference between his home record and his road record sent me back to the stats books, and what I found was so interesting it will require its own post. Those of you who like your stats stirred, with a dash of standard deviations, watch for the post near the end of the week. Those of you who break out in hives when you see error bars on a chart, you have been warned...

The Steelers receivers joined their brethren in Cleveland in a festival of incompetence. In Pittsburgh's case, though, the receivers had some excuse, as their quarterback became more and more erratic and less effective as the game went on. (That said, there were some catches which totally should have been made.) On the other hand, Brandon Weeden posted a 93.8 passer rating despite the flurry of drops from his receivers. If they ever figure out how to hang on to the ball, things are going to look a lot different in Cleveland. With the Steelers' luck this season, that day will almost certainly come next Sunday... 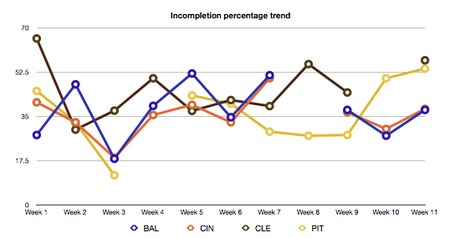 That's it. And Binns probably shouldn't be on this list, as he has not played (or been targeted when he did) for the past four weeks. Numerically, though, he still has considerably more targets than any other Bengals wide receiver besides A.J. Green and Andrew Hawkins—the next closest is Brandon Tate, with 17, and he doesn't make the cut.

Here's some more numbers to look at: 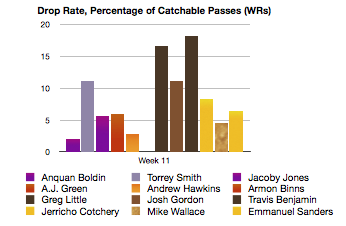 Cincinnati, whose wide receivers had been impressively sure-handed, crept up the chart a bit this week. They are still the best in the division. Here are the TEs: 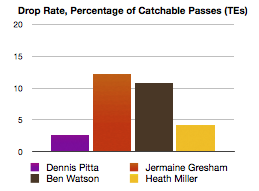 From worst in the division earlier in the season Pittsburgh's running game has risen, phoenix-like, from the ashes of the Bruce Arians offense. They now lead the division for the second week in average yards per game. 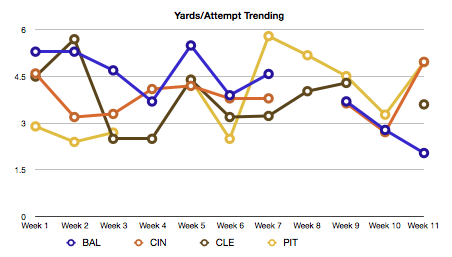 Both the Bengals and the Steelers rushed for a stellar five yards per carry average in Week 11. Many in Pittsburgh feel the Steelers-Ravens game would have been won with a few more carries for Jonathan Dwyer late in the game. Ironically, the Ravens were the only team not to top 100 yards rushing in Week 11. They didn't even top 50 yards, unusual for Ray Rice.

On to the Defensive Stats:

NFL Ranking (Averaging the NFL figures for Average Yards Per Game and Average Points Per Game:)

The AFC North is steadily coming up in the defensive world, although they may or may not eventually end up as all top ten defenses like last season. The improvement is striking, or so I thought, and I decided to put it on a trending chart: 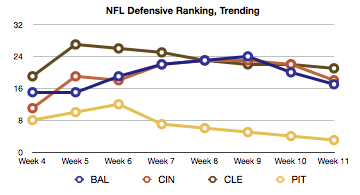 This just goes to show how inaccurate one's memories are. In fact, as you can see, the whole AFC got worse before it got better. Note this begins at Week 4, which was the first week I began averaging the rankings for Average Yards Per Game and Average Points Per Game. Prior to Week 4 I only gave the Average Yards Per Game ranking, which can be deceptive. And, as the Splash Plays index below shows, there are areas where the Steelers defense is definitely trailing in the AFC North. Nonetheless, after a few less-than-stellar games in which they gave up a late-game lead, the 2012 Steelers D is getting the job done in terms of keeping games winnable for the offense. If the offense can't or won't take advantage of it, this cannot be laid at the door of the defense. In the meantime, the Ravens and Bengals are beginning to close the gap in yards and points.

Pittsburgh, while still significantly trailing the Ravens, is creeping upward in Passes Defensed. Astonishingly, they are also ahead of Baltimore by a nose in Average Sacks Per Game, although well behind either Cincinnati or Cleveland.

Some AFC North defensive players are appearing at the top of stat lines this week. Cary Williams of BAL has four interceptions this season, which ties him with six other DBS for No. 4 in the league. (One of those was of Byron Leftwich.) Keenan Lewis of PIT is tied for first in the league (with Chicago's Tim Jennings) with 18 passes defensed. (Jennings also is No. 1 in interceptions, with eight. If only Lewis were tied in that stat as well : ) Geno Atkins of CIN is tied for No. 10 in sacks, with eight. 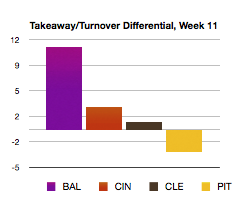 Well, Pittsburgh is looking truly pathetic after three turnovers on Sunday, even as the Browns and Bengals climb to the positive side of the equation. As usual, Ike Taylor dropped a sure interception gift-wrapped by Joe Flacco, and the Stone Hands bug appears to have spread like lightening around the Pittsburgh locker room. The pathetic -13 differential the 2011 Steelers ended the season with seems only too attainable this year. But we can hope for better things. 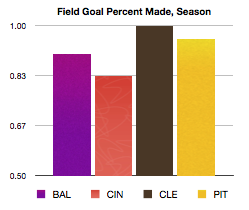 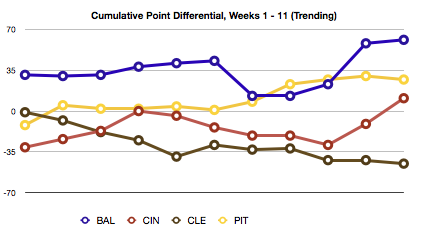 The Bengals emerged from the negative side of the chart for the first time since Week 4, when they had made it all the way up to zero. The Browns continue to wade in the River Styx. The Ravens are crowing with a +61 differential, and the Steelers slipped back to 27 after a three-point loss.

That will do it for this week. Come back next week to find out whether the Steelers manage to keep their tenuous grasp on the No. 2 slot in the division, and whether they will have to start a fourth quarterback the following week...