In which we look to see whether there is any comfort to be found in prior Steelers championship seasons...

Share All sharing options for: A Comparison of the 21st Century Steelers Super Bowl Teams: Game 10

Once again the four Steelers teams are at .500, but the winning and losing teams have flipped since last week. Let's see how they got there.

These days, one scarcely needs to move one's eyes over to the W/L column to infer, with a high probability of being accurate, the Steelers lost when you see "BAL" and "M&T Bank Stadium" in columns two and three. And sure enough, the Steelers lost a close, hard-fought defensive battle. However, these weren't the present-day Ravens. When the game began, the Ravens had not managed to put a touchdown on the board by any means in the previous three games, and they had lost the previous four. (Ironically, the last touchdown was in a loss to the Steelers at Heinz Field.) Baltimore was 3-7. Pittsburgh was 7-2 prior to this game, and had an 11-game winning streak on the road, dating from the previous season's loss to the Ravens at M&T Bank Stadium in September of 2004.

The victory was a much-needed lift for the Ravens, but came with an asterisk, as Ben Roethlisberger was still out after arthroscopic knee surgery and Tommy Maddox was at the helm once again. How did he do? Well, here's the NFL.com assessment after the game:

For 50 minutes, Pittsburgh looked a whole lot like the 2005 Ravens: Their quarterback was ineffective, the running game struggled and they hadn't come close to scoring a touchdown.

Although the Steelers were trailing by a touchdown in the fourth quarter, they managed to even the score to force overtime. The touchdown was a Willie Parker run, but Antwaan Randle El once again completed a pass in the drive. Hines Ward finished with more receiving yards—81—than the entire running game garnered. As Ward said after the game,

They weren't going to let us run. That was their scheme. It left us a lot of opportunities in the passing game.

We have to move forward. Right now it's a six-game season. That's how we have to look at it.

A Steelers player sustained a knee injury. A Ravens player was concussed. The final score was separated only by a field goal after neither offense could generate much in the way of scoring. The Steelers were playing without Ben Roethlisberger. It feels vaguely familiar, somehow.

This game was a win for the 6-3 Steelers, and a huge fail for the NFL and for people who like to gamble on the results of a football game. The score was unique in NFL history—11-10. This was made possible by a James Harrison safety in the second quarter, combined with three Jeff Reed field goals. Ladainian Tomlinson ran in a touchdown early in the first quarter, and led the game until halfway through the third quarter. San Diego took the lead again in the fourth quarter with a field goal, but Jeff Reed his third goal of the day to make the score 11-10 with 15 seconds left on the game clock.

This is where it gets complicated. The Chargers had the ball back for a final Hail Mary attempt. Rather than attempting a long pass, Philip Rivers flipped the ball to Tomlinson, who lateraled to Chris Chambers, who lateraled to—Troy Polamalu, who then took the ball in for a touchdown. Woo-hoo! Pittsburgh not only wins, they covered the spread!

Except the referees, who one would assume had some money on the Chargers, ruled the ball dead before Troy touched it, claiming it was an illegal forward pass, and reversed the ruling, so the final score was 11-10 instead of 17-10. And Vegas went nuts. The spread was Steelers by four and a half points. There is a very entertaining article in the archives of the New York Times' Fifth Down blog detailing the whole sorry mess. The disputed play was eventually deemed by an NFL referee to have been legal and thus the touchdown should have stood.

The Chargers were 1-5 on the road in 2008 when they traveled to Heinz Field. The Steelers dominated in essentially every category, including 13 penalties for 115 yards. And yet they couldn't cover the spread. At least they won the game. During the game they lost RG Darnell Stapleton. The game was also notable for what may have been the first game appearance of Mike Tomlin's Puffy Jacket.

The first line of the ESPN recap of the game perhaps sums it up best:

PITTSBURGH -- The Steelers returned to the Steel Curtain days of the 1970s. The Raiders went back to the bad old days of the last seven years.

It was a brawl, no doubt, but the outcome was never in question, scarcely a given for long-suffering Steeler fans. The combination of the previous week's humiliation at the hands of the Patriots, combined with the previous season's loss to Oakland during the 2009 five-game losing streak had Pittsburgh flying out of the gate ready to play physical football. They dwarfed the 2008 Steelers 115-penalty-yards game with a team record of 163 yards in penalties. As James Farrior said,

It definitely was an old school, physical type game from back in the day. That's the type of game we wanted to make it, a physical game, and improve from our performance of last week.

James Harrison alone had five tackles, two sacks, a forced fumble, and interception, and a personal foul penalty. (The Steelers would manage to acquire six of the latter by the end of the game.) Harrison said,

We didn't worry about the calls. When you're getting a lot of penalties against you, it brings you together.

Richard Seymour tried to join in the fun by punching Ben Roethlisberger in the head long after the end of a play, and got ejected from the game for his trouble. He claimed it was a natural reaction to Roethlisberger coming up behind him. I'm amazed he has been in the league for so long if his nerves are that delicate.

A Steelers defense who had only once allowed a 100-yard rusher in the previous 44 games limited Darren McFadden to 14 yards on 10 carries. Ben Roethlisberger threw three touchdown passes, ran in a fourth touchdown himself, and Rashard Mendenhall had a 15-yard rushing touchdown. Shaun Suisham, the kicker hired to replace Jeff Reed during the previous week, didn't have to attempt a field goal. All in all a good day at the office.

Once again I won't attempt to recap a game which has been as extensively discussed as last Sunday's loss to the Ravens, other than this: despite everything, the game was winnable. A special teams fail, aided by a missed block-in-the-back on a Steelers defender, gave the Ravens their only touchdown and altered the final score from a probable 10-6 Steelers win to a 13-10 Ravens win.

A thoroughly depressing game, it had one bright spot at the end—Ray Rice mockingly twirled a Terrible Towel as he exited the field. We all know what happens to players who disrespect the towel. < unbiasedreporting > Rice has tweeted he meant no disrespect, and the towel is intended for his basement, to commemorate the awesome Steelers/Ravens rivalry. < /unbiasedreporting >

It will be interesting to see what form the Revenge of the Towel takes. Will Rice go down in this Sunday's game with a season-ending injury? Reports are at least one other player participated in the towel abuse, which may have implications for the whole team. Myron, we're counting on you to make this right... 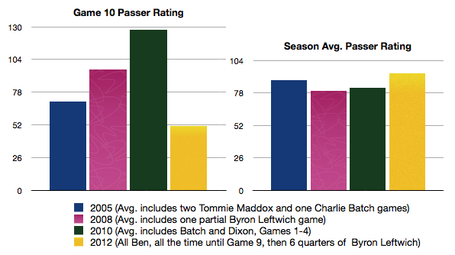 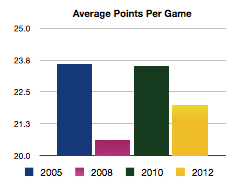 Note as usual the chart begins at 20, so objects in the mirror may appear larger than they actually are.

On to the Defense:

The 2012 Steelers are officially tied with the 2008 Steelers for best pass defense overall. 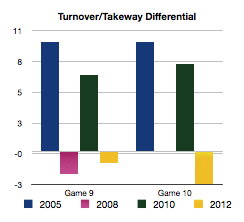 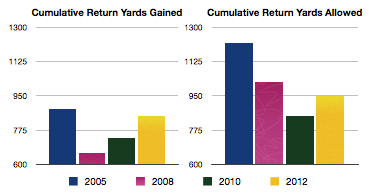 The rubber hits the road—Point Differential: 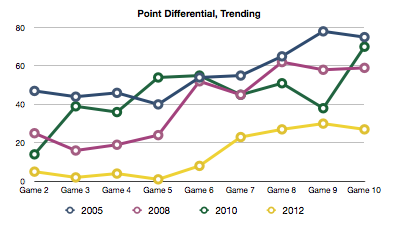 At least the 2012 Steelers have stayed on the positive side of the line since the first game. We have to be thankful for small mercies.

And speaking of thankful, I'm thankful my turkey is almost done, and it's time to go bake some sweet potatoes. Have a wonderful holiday, everyone!