Although none of them had a game as bad as the 2012 Steelers' Game 11 (and may the good Lord grant we never see another game like that in our lifetime,) the 2005, 2008, and 2010 teams had a few stinkers on their resumé. The 2005 game at Indianapolis surely sent a few shivers down the collective spines of the fans, for instance...

Share All sharing options for: A Comparison of the 21st Century Steelers Super Bowl Teams: Game 11

The photo above is in honor of the man who intercepted a pass in three out of this week's four games. He wasn't playing in the fourth. (The picture is from the 2010 game.)

The Colts were 10-0 when the Steelers entered their building. They were 11-0 when the Steelers left. Although Ben Roethlisberger was back after missing several games with a knee injury/surgery, the passing stats did not look much better than the several preceding games without him. The game was a Monday night prime-time matchup, allowing the world to glory in the wonder that was Peyton Manning. It was Manning's first win over Pittsburgh, and Roethlisberger's first road defeat of his young career.

The Colts certainly beat the Steelers with offense. Edgerrin James was the first rusher to gain 100 yards against the Steelers in 23 games. Manning played nearly error-free ball.

But they didn't only beat the Steelers with offense. Their defense held a possibly rusty Ben Roethlisberger and a well-used running game to a total 197 yards. Six different players tried toting the rock, including Roethlisberger, whose seven yard average per carry (three carries) was far better than any of the usual backs, Willie Parker, Jerome Bettis, or Duce Staley. (In fact, Roethlisberger led the team in rushing until the final moments of the game, with 21 yards on three carries.) Hines Ward scored the sole points for the Steelers at the end of the first quarter, and the Steelers only got close enough to the end zone to even attempt a field goal once. It ended in a missed 26 yard attempt by Jeff Reed.

Luckily, Manning made one mistake, or the Steelers might have been shut out. An underthrown ball led to a Troy Polamalu interception in the first quarter. He returned the ball 36 yards to the Indianapolis 7-yard line, setting up the Steelers' lone touchdown.

The coaching staff did not leave the game unscathed, with head coach Bill Cowher opening the second half with an onside kick which backfired badly, setting Indianapolis up at midfield.

The Colts wanted to make a statement about their defense and their physical style of play, apparently, garnering face-mask, unnecessary roughness, and two personal foul penalties. Pittsburgh, like every other aspect of the game, tried to keep up, but was unable to match the Colts in penalty yards. They came close, though.

Things were looking much rosier in Pittsburgh in late November of 2008. The Steelers preceded the game against Cincinnati with a ceremony honoring Dick LeBeau's 50 years in the NFL. The defense decided to continue the tribute during the game itself, holding the Bengals to six first downs after an initial touchdown drive. The game ended with the Steelers' defense giving up a total of 208 yards, only 43 of which were on the ground.

It was just as well, too, because the Pittsburgh offense didn't manage to get much going. Their first score came in the second quarter, on a Troy Polamalu interception return which started their drive near midfield. The running game netted 121 yards, with Mewelde Moore gaining almost half of them. Gary Russell and Ben Roethlisberger scored rushing touchdowns—it was Russell's first NFL TD. Heath Miller scored the sole receiving touchdown. Jeff Reed was two of two on 37 and 38 yard field goals.

To be fair to both offenses, the game was played in blowing snow, with a night-time temperature of 32 degrees.

The Bengals, already 1-8-1, dropped to 1-9-1. Ryan Fitzpatrick started for the injured Carson Palmer, and he didn't have star wideout Chad Ocho Cinco to throw to, either. Ocho Cinco had been benched for violating team rules (which ones, coach Marvin Lewis wasn't saying.) T. J. Houshmandzadeh said, in a couple of classic post-game quotes:

[in re the Ocho Cinco benching] They did what they felt was best and whether I agree with it or disagree with it, it doesn't matter. He [Lewis] is the head coach and Mike Brown owns the team and they are going to do what they want. I'm sure he would have helped, but we've lost eight games with him.

About the game, he said:

It's been the tale of our season. The defense plays great, the offense is bad, basically.

The Steelers barely squeaked out an overtime win in a game they completely dominated in the first half. The MVP had to be kicker Shaun Suisham, who tied an NFL record he had previously set with the Redskins, making four field goals from over 40 yards, including the game-winner in overtime.

Ironically, the opposing quarterback was again Ryan Fitzpatrick. This time, however, he was the team's starting quarterback. Although Fitzpatrick, along with the entire Bills team, struggled in the first half (the half ended at 13-0, Steelers, with Pittsburgh holding the ball for almost 24 minutes) he and his receivers made an impressive comeback in the second half, and he threw a 40-yard pass to the end zone in overtime. It would have won the game, had receiver Stevie Johnson not dropped it. A trademark Troy Polamalu diving grab of a pass which bounced off the fingers of, who else, Stevie Johnson at the PIT 1 yard line in the fourth quarter probably prevented the Bills from winning in regulation.

James Harrison made more news with a roughing-the-passer penalty for a helmet-to-chin hit on Fitzpatrick. Harrison had already accumulated $100,000 in fines during the season for such hits. A "woozy" Fitzpatrick was not removed from the game. I guess the league wasn't as caring two years ago. The score was still 13-0 at that point. Strangely, the hit sparked a scoring frenzy, with all 16 of the Bills' points coming after it.

It was a win, but the Steelers were well aware it wasn't an impressive one. A few other records were set besides Suisham's, though. Rashard Mendenhall carried the ball a career-high 36 times, gaining 151 yards and scoring a touchdown. Hines Ward broke his own team record with his 28th career 100-yard receiving game. The Bills tied an NFL record with three overtime losses in 2010.

The less said, the better. If it wasn't for some sort of warped sense of journalistic integrity I would have been tempted to skip this week...

Enough about our feelings. Let's look at the stats: 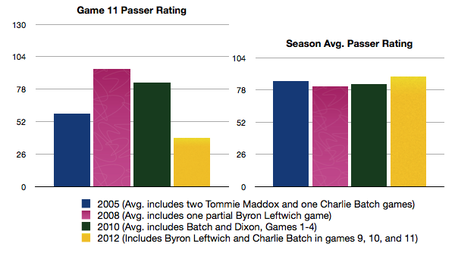 Remarkably enough, even after two wretched games the 2012 Steelers still hold the highest average passer rating at this point in the season (88.7.) I don't expect this to last, unless Ben Roethlisberger makes a trip to Lourdes.

It is fascinating just how close the rushing average is at this point. The 2012 Steelers are still beating the 2008 team, by a hair, but slipped behind the 2005 team. 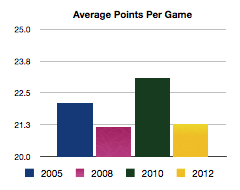 The 2012 Steelers still have the best pass defense of all the teams, and while they can't match the stingy rushing defenses of 2008 and 2010 they aren't far off matching the '05 club.

Okay, now it gets painful. Brace yourselves: 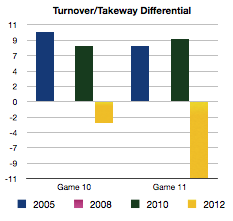 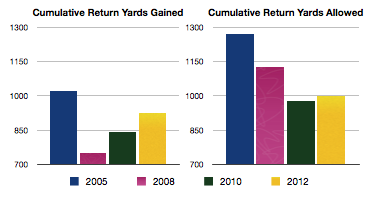 Special Teams still looks pretty good from the balance between yards given up and yards gained, comparatively. However, the 2012 club has given up a special teams touchdown, and only the 2010 team has gained one. (The 2012 team has also had, by my reckoning, three special teams touchdowns nullified by penalties. Penalties for fouls which, IIRC, would have been unlikely to have affected the play. So maybe this season's special teams should get some sort of award. I'll get out the tinsel and construction paper...)

One final painful chart, and I promise to make it stop: 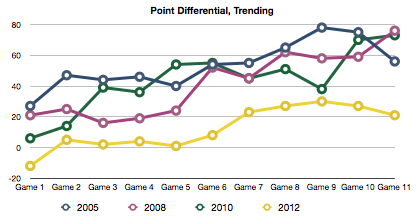 In case it isn't painfully obvious enough, the 2012 Steelers are 25 points behind their nearest competitor. Oh well.

That will do it for this week. Let's hope there is something more cheerful to report next week. (Note I said "hope." Where there's life, there's hope, right?)