Are the 2012 Steelers rounding into form, or just setting Steeler Nation up for further heartbreak? The numbers never lie, except when they do...

Are you what your record says you are? I'm not so sure. The 6-2 Baltimore Ravens don't look like a dominant team. Although next week's first match will tell us all a lot more about the two teams, the Steelers are looking a lot more like a contender than the Ravens at the moment, despite sitting one game behind last year's division champs. But speaking of records, let's look at the records at issue for this post—those of the 2005, 2008, 2010, and 2012 Steelers.

Here's one reason I don't believe "you are who your record says you are." The 2005, 2008, and 2010 Steelers all stand at 6-2 after eight games. But they got there in different ways, as will be illustrated by the numbers. But first, the background:

Game 8 pitted the Steelers against 2010's Super Bowl foe, the Green Bay Packers. But unlike the 2010 team, the Packers were quarterbacked by some old guy called Brett Favre. Although a legend in his own time, Favre helped to add to the Steelers' growing legend of their own, S Troy Polamalu, who was upset with himself for missing a sack of Favre in the second quarter. But with his usual Zen-like resignation to what has gone before, he instead scooped up the fumble forced by Bryant McFadden, who did get the sack, and took it back 77 yards for a touchdown.

The Steelers needed all the help they could get from Favre and their defense, as among the players watching the game in street clothes were Ben Roethlisberger (knee injury) and running back Jerome Bettis (thigh injury.) Willie Parker turned his ankle during the second half, sending Duce Staley into the game for his first carries since the previous season's playoffs. Charlie Batch qb'd for Roethlisberger, his first start since December of 2001. He scarcely had a stellar game—he was 9 of 16 for 65 yards and threw a pick. But Tyrone Carter got into the action with a second interception in the fourth quarter, and Duce Staley put the game away with a 3 yard touchdown run, the sole offensive touchdown of the game for the Steelers.

Same story, second verse, at least as far as the quarterback was concerned. Although Ben Roethlisberger started the game, he was injured partway through, and was pulled for backup Byron Leftwich. Although he had a one-yard rushing touchdown in the first half, Ben was not at his best—he completed only five passes on 17 attempts for 50 yards, and threw an interception to boot for what is perhaps a historically bad QB rating for Roethlisberger of 15.1. Leftwich, conversely, looked terrific, although he gave back Ben's rushing yard by losing one. He was 7 of 10 for 129 yards, no interceptions, and a TD, garnering him a 145.8 passer rating. I wasn't a Steelers fan then. Can those of you who were remember whether this began a "quarterback controversy" in Pittsburgh?

As for the game itself, although the Redskins drew first (and second) blood with six unanswered points on two field goals in the first quarter, they did not score again, and the Steelers cruised to victory.

Conversely, Pittsburgh started this game by punching the Bengals in the mouth. More accurately, Emmanuel Sanders forced a Bernard Scott fumble on the opening kick return, and Jason Worilds recovered it to give the ball to Pittsburgh at the 25 yard line, on the Cincinnati side. Less than two minutes into the game Rashard Mendenhall ran into the endzone for a touchdown. The Steelers went to the locker room at halftime with a 20 - 7 lead, with the first Cincinnati score not coming until well into the second quarter.

But in a scenario which has become only too familiar since then, the defense allowed an almost two score lead to trickle through their fingers in the fourth quarter, and if not for a Randle El pass to Mike Wallace for a touchdown the Bengals would have won by one point on two fourth quarter touchdowns.

This season they started out slowly, but they are 4 and 2 without Troy, for a winning percentage of 66%. I'm not including the Week 5 game vs. Philadephia, because Troy left at the end of the first quarter and the game was scoreless at that point. If anything, it should count as a win without Troy, giving the 2012 Steelers a winning percentage of 71% without Polamalu. (Troy did have two tackles in the game before he left, including a tackle for loss of Sean McCoy.) It's not what one would like, but far better the team learns to win without him. Hopefully they will be even better when he returns.

Now let's look at the numbers and see what they say.

It's official—Ben is having a career year. At least until one factors in the times Roethlisberger was missing in the previous seasons. The next best season is 2005, and factored into the average is the Tommie Maddox game (31.5 passer rating) and a highly unimpressive Charlie Batch outing. If one only looked at the passer ratings for Ben Roethlisberger the average looks different (note I started the chart at 50 to make the differences more evident.) 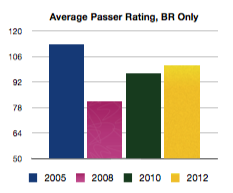 The mitigating factor when looking at the difference between 2005 Ben and everything else is how many less times Roethlisberger threw in 2005. He definitely made the throws count. But he's thrown for a great many more yards this season than any before, and on a much greater number of attempts. Some of this is due to the greater amount of time he has played, (although in 2008, statistically by far his worst year, he only missed part of one game so far.) Some of the difference this year is probably due to making a larger number of higher-percentage throws. But have a look:

As you can see, if you add together all of the yards Ben threw for in all four years in the first eight games, he gained 41% of them this season. (It's odd, but correct, that 41% of the total attempts have also come this season.) When you factor in the number of games played, he has still gained a third of them this season. As the running game has gotten off the ground in the past three weeks, so to speak, the number of attempts has dropped. I suspect it won't be long before teams will start having to give up the long ball to prevent bleeding to death from the short passing game and the running game, and we will see the team gaining more yardage in chunks.

Well, enough about Ben. Let's look at the stats for the total offense:

I thought you might like to see how the team has evolved this season, so here are the ratios for each game in 2012. You might want to have a tissue handy:

Black is rushing, gold passing, as ever... 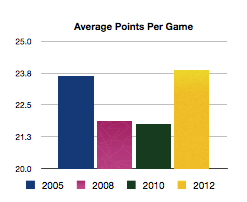 Again, I moved the bottom number up to 20 as the four teams are quite close, and it is easier to see the differences. The 2012 team still has the edge.

Now for some DEE-FENSE!

Now that is a thing of beauty!

And this is becoming more beautiful by the week. 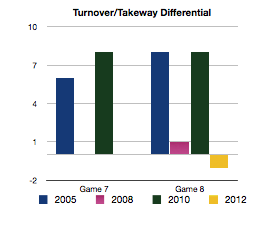 This season's defense is still lagging behind the other teams. Even the 2008 Steelers climbed back from zero this week. In some ways, it makes it all the more impressive to see the 2012 defense ranking so high without a lot of takeaways. It also makes the offense's time of possession even more stunning. 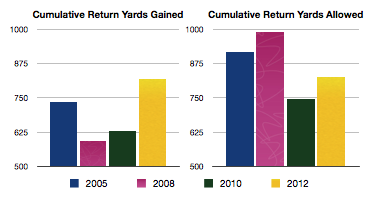 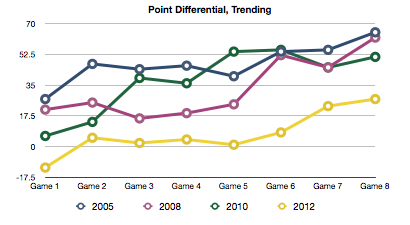 The arrow, as Mike Tomlin would say, is still pointing up. Let's hope it continues to do so. That's it for this week.