In which the Bengals hosted the Raiders, the Ravens went to San Diego, and the Steelers and Browns duked it out on the coast of Lake Erie. The western bit...

How they got there:

Cincinnati hosted not just the Raiders but former quarterback Carson Palmer. The crowd at Paul Brown Stadium booed him heartily. Odd, that. Palmer didn't want to be in Cincinnati, so he was traded to the Raiders for a king's ransom in draft picks. Some of the good things which came from the trade include the No. 1 receiver in the NFL (according to Pro Football Focus, at any rate,) a better quarterback than Carson Palmer, and a ton of miscellaneous draft picks. And yet they booed. Are you kidding me?

Under the circumstances Palmer no doubt wanted to make the Bengals regret his absence just a little bit. By, perhaps, crushing them in a 38 - 0 game, or something equally soothing to a bruised ego. Instead it was the Bengals who led 24-0 at halftime, and the ten points the Cincinnati defense allowed to Oakland in the second half was matched by the Cincinnati offense. Oakland was unable to create much excitement on the field until two defensive players got into a scrum with a Bengals receiver, getting all three players ejected from the game. I expect the Raiders were more than happy to board the plane and head back to Oakland.

The Ravens had to travel the other direction for their Sunday night prime-time game. The game was scoreless until about halfway through the second quarter when the Chargers scored first a touchdown and then a field goal. The Ravens didn't make it on the board until partway through the third quarter, thanks to a Justin Tucker field goal. The Ravens tied the game 13-13 on another field goal as the clock ran out in regulation, thanks to a Ray Rice conversion of a dump-off pass on 4th and 29. After exchanging punts with the Chargers the Ravens made it into field goal range near the end of overtime, and Justin Tucker again knocked it between the uprights to squeak out a win.

Once again the Steelers found themselves facing a divisional rival, this time on the road. Although the game was in Cleveland, the Steelers were favored to win. It looked like they might just do it, too, as Lawrence Timmons intercepted a tipped Brandon Weeden pass early in the first quarter. But Cleveland's opportunistic defense combined with Pittsburgh's unbelievably inept offense led to a Cleveland win which was, incredibly, by less than a touchdown. Any time a team turns the ball over eight times, they deserve to lose by about a billion.

What football fans across America don't know, though, is this loss was a secret fulfillment of a deathbed wish for a sweet little old lady known to one of the Pittsburgh players. A life-long Browns fan, she just wanted to see the Steelers beaten by Cleveland one more time before she died. The players agreed privately to make her wish come true.

But it wasn't all smooth sailing. Lawrence Timmons felt awful after his interception—as he told the defense in the huddle, "it was sheer instinct. I never meant to score. We're going to have to rely on the offense to bail us out now." Desperate times call for desperate measures, and the running backs took it upon themselves to ensure defeat. Their amazing heroism as they made their way back to the bench on the Long Walk of Shame after each one fumbled is inspiring. And let us not forget the receivers, two of whom are in a contract year and one of whom was just signed off the street, allowing themselves to look like they didn't know what they were doing. Charlie Batch was the ensign, though, leading them by example as he threw three picks. I only hope the lady died happy and is now resting in peace.

I just made up the preceding paragraph. But the game America was forced to endure last week would have made a lot more sense if it were true. 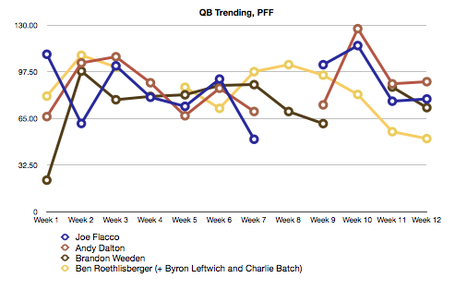 How about the Interception Watch?

It was a sloppy week for the AFC North receivers. But as we all know, not every ball thrown to a receiver is catchable. So I've been following Pro Football Focus this season to see how bad things really are. Here are the stats for the three most targeted wide receivers on each team. (The figure is a season average.) Note Mohamed Sanu has surpassed Armon Binns as the No. 3 wideout target in Cincinnati, and Mohamed Massaquoi has replaced Travis Benjamin in Cleveland. Antonio Brown rejoins the chart, since neither he nor Jerricho Cotchery played last week; Brown will be back for Week 13. 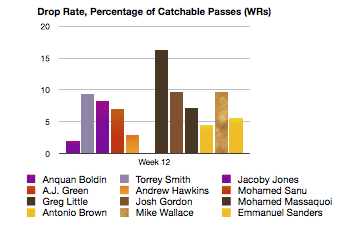 Obviously lower is better - Sanu has a perfect 0.00 drop rate. Here's the same calculation for the principal tight ends: 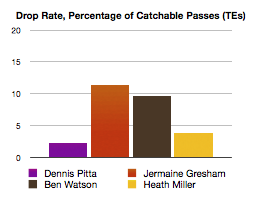 I find it quite fascinating how close the teams are, especially in Average Rushing Yards per Attempt. (This is a cumulative season average as of Week 12.) It's especially interesting when you seen how they got there: 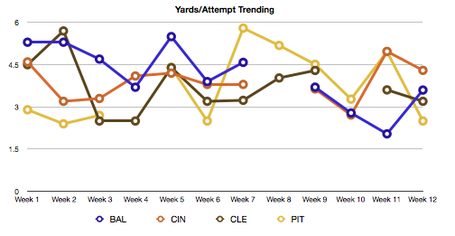 On to the Defense: (If you are a Steelers fan, the more said about the defense and the less about the offense, the better...)

NFL Ranking: (The ranking is the average between the NFL ranking in Average Yards per Game and Average Points Allowed per Game:)

The AFC North continues to come up in the defensive world, none more quickly than Cincinnati. 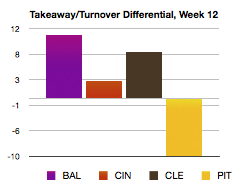 Although the Pittsburgh defense has turned up the heat in recent weeks in Sacks and Passes Defensed, they still trail the division in sacks. But nowhere are the differences more evident than in the takeaway/turnover differential. While you can blame the defense for not coming up with more takeaways, you can hardly fault them for not keeping up with the Cleveland Fumblefest. 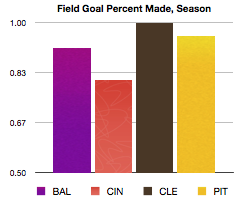 Phil Dawson of Cleveland is one of only two kickers in the league to have played the whole season and have a perfect record. (Sebastian Janikowski of Oakland is the other, but Dawson has made two more kicks.) Justin Tucker has been most impressive for the Ravens, and Shaun Suisham is having a career year in Pittsburgh. In fact, only Mike Nugent of the Bengals is under 90% of kicks made. 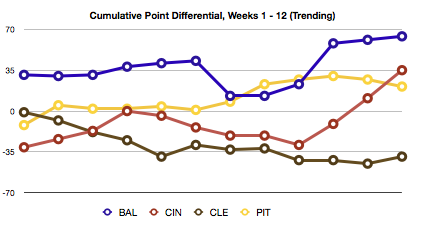 Would you look at those upstart Bengals! The Steelers are definitely watching their backs as the Bengals are on a roll.