AFC North Roundup: There is No Joy in Mudville Edition

Which is, strictly speaking, not true—only three-quarters of the AFC North struck out last week. Let's see how they did it, and who is the surprise hot team in the AFC North at the moment.

Share All sharing options for: AFC North Roundup: There is No Joy in Mudville Edition

I think it is safe to say most followers of the NFL, if told only one of the teams in the AFC North had won last Sunday, would have guessed the wrong team. But the Browns, who have lost a number of close games this season, didn't just manage to pull out a close win. They blew out an opponent much of the division has struggled with.

The Browns had a few advantages, no doubt. They played the Chiefs at home, rather than Arrowhead Stadium, where the Ravens won, barely, 9 - 6. (The Bengals, however, trounced the Chiefs handily there a month ago. And the Steelers avoided an embarrassing loss in overtime, 19-16, at home.) The Chiefs were coming off a very emotional win after the self-inflicted death of their teammate, and no doubt the reality of the situation really began to hit home in the week following. Top receiver Dwayne Bowe, who has over a third of the team's receiving touchdowns and almost a third of their total passing yards, was injured in the first half of the game and did not return.

Kansas City running back Jamaal Charles began the game with a bang, running the ball 80 yards for a touchdown on Kansas City's opening play. It was the only points the Chiefs would score. Browns running back Trent Richardson scored twice. In the process he tied Jim Brown's 1957 club record of nine touchdown passes in his rookie year. Brandon Weeden didn't throw any touchdowns, but he didn't throw any interceptions, either. Rookie Travis Benjamin sweetened the pot with a 93-yard punt return for a touchdown, and the ever-reliable Phil Dawson contributed three field goals to the mix, bringing his career total to 300.

Dawson, a 14-year veteran, believes the Browns have turned things around. Cleveland is a very young team, and it looks as if some of the young guys have been growing up this season. This may turn out to be bad news for the rest of the division.

The Bengals were at home last Sunday, but the Cowboys wrested a win from Cincinnati, even as they, like the Chiefs, dealt with the death of a teammate. Although they led the Bengals 3-0 for part of the first quarter, they were down by nine points until the last six minutes of the fourth quarter. They scored first a touchdown and then a field goal, for which Cincinnati had no answers. The Bengals defense, who had held opposing offenses to less than a touchdown in their previous four games, allowed two of them to the 6-6 Cowboys. The Bengals, who had won the previous four games in a row, lost out on a great opportunity to move ahead of Pittsburgh and within a game of the Ravens.

The third home team, the Steelers, came off an emotional win over the Baltimore Ravens the previous week and laid an egg at Heinz Field versus the 4-8 San Diego Chargers. Quarterback Ben Roethlisberger looked nimble in his first start since his injury in the game versus the Chiefs a month before. He needed to be, as well, as there appeared to be more Chargers in his backfield than Steelers most of the time.

With this loss, the Steelers missed a golden opportunity to move within one game of the Ravens and to get an essentially two-game lead over the Bengals, since the Steelers currently hold the tie-breaker over Cincinnati. I'm sensing a pattern here...

Mr. [Torrey] Smith went to Washington, along with the rest of the Ravens. The Baltimore defense managed to knock all-world superstar of awesomeness Robert Griffin III out of the game. They then lost to his backup in overtime. Strangely, this was due largely to their special teams giving up a 60 yard punt return. Ray Rice had 20 carries for 121 yards, with the team rushing for 186 total yards. And yet offensive coordinator Cam Cameron was fired. With this loss, Baltimore also lost an excellent opportunity to clinch the division.

Let's look at the stats.

Ben Roethlisberger is really dominating the AFC quarterback average, if you look at the Pro Football Focus ratings. Curiously, he and Joe Flacco are tied for the NFL average ranking, at an average rating of 89.2. (It has to be pointed out, though, the Pittsburgh averages include two sub-par games by Byron Leftwich [51.3 NFL, 55.75 PFF] and Charlie Batch [38.7, NFL, 50.91 PFF])

Curiously, the PFF rating for Roethlisberger in Week 14 is substantially higher than the NFL rating (100.28 as opposed to 87.9.) The PFF rating teases out what they believe to be things under the control of the quarterback (like not noticing a defender standing right between you and your receiver) and things which are not (like a well-thrown pass dropped by the receiver or knocked out by a defender,) and adjusts the rating accordingly. So even though Roethlisberger didn't look particularly sharp in the first half of the game, apparently they felt some of that was not on him. In fact, he received the second highest QB rating from PFF for the week, right behind RGIII. (Tom Brady, in case you're wondering, was No. 4.)

That's about all the good news for Pittsburgh this week.

But the NFL doesn't distinguish between a throw-away, a bad throw, and a pass the receiver should have caught. And although there can undoubtedly be some difference of opinion about whether the QB or the receiver is at fault, PFF makes a determination and publishes a drop rate. Here it is for the three principal wide receivers for each team: 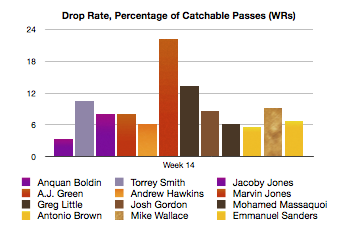 This chart is an average. The Cincinnati receivers, who were so good for so long, have gotten the bug, it seems. To be fair, Marvin Jones was thrust into the No. 3 role due to season-ending injuries to Armon Binn and Mohamed Sanu, both of whom had 0.00% drop rates for the season. Greg Little has been butterfingered since his 2011 rookie season, and does appear to be improving. When I started charting this stat in Week 6 his drop rate was an embarrassing 30%, and is now down to 13.33%, an amazing improvement. The Steelers' Mike Wallace, on the other hand, is having an uncharacteristically bad year, or so I thought, as his drop rate for all of 2011 was a team-best 5.26%. However, as I looked back to 2009 and 2010, it seems his drop rate is pretty similar to this year's, sitting right around 9.5%. And it turns out half of the most-targeted receivers this season have a drop rate over 9%. So I decided to do a bit more digging.

PFF has only been keeping stats since the 2008 season. Here are the figures for the best receiver, the best PIT receiver, and the mid-point receiver every year:

These are for the most-targeted receivers in the league, representing about 1.5 receivers per team. There are several interesting things to me on this chart. First of all, the No. 1 and the midpoint receiver thus far in 2012 have both just been put on IR. It's nothing to do with me, I swear it! But back to stats as opposed to coincidences, note the mid-point rate for each season falls within a rather small area, right around where Mike Wallace is sitting at the moment. (In fact, Wallace's current drop rate is exactly the same as Dwayne Bowes'.) Second of all, note Brown's rate at the moment or Wallace's rate last year could be viewed as the aberration, as they are both better than the Steelers' usual best receiver for the season. (Brown's rate might go up between now and the end of the season, but it could also go down.) I think I will put together a post during the holidays looking at the drop rates in more detail, but for the moment, enough said. Frankly, I don't think the Heinz Field crowd should be booing Mike Wallace. But then I'm not a big fan of booing anyone, even Jeff Reed : ) 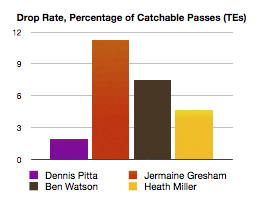 As you can see, tight ends tend to be more reliable in pass catching, unless their name is Jermaine Gresham. (Note the top number on the TE chart is 12%, as compared to 24% on the WR chart.) Comparing them to the rest of the league, for highly targeted TEs, Dennis Pitta of BAL currently holds the No. 1 spot, and Heath Miller the No. 3.

Pittsburgh is losing ground, so to speak. Interestingly, the yards/attempt average is still very close.

Cincinnati is scaring me.

(As usual, calculated by averaging the ranking for average yards/game and average points/game given up:)

Here's Trending for both stats: 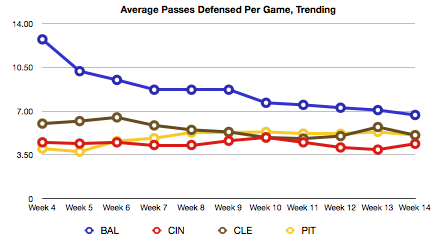 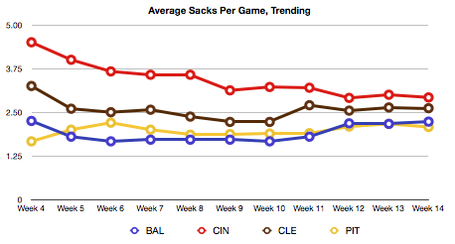 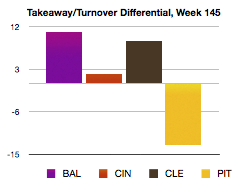 Baltimore and Pittsburgh took a step back. Unfortunately in the case of the Steelers they were already down a well. Where's Lassie when you need her? Cincinnati held steady, and Cleveland improved. Sorry, I just noticed the "Game 145," and no, this hasn't suddenly become Major League Baseball...

I've been keeping Trending charts for both stats, but they just look like spaghetti dumped on the floor. Probably the most consistent team has been the Bengals, but that isn't saying much. As far as averages, Baltimore has by far the best ratio of yards given up to yards gained. Here it is for all the teams:

Black is Yards Given Up in each case. 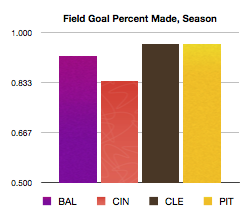 Phil Dawson and Shaun Suisham are tied at 96.3% of field goal attempts made. At this rate Suisham might be the MVP for the Steelers this season. Which is sort of sad when you think about it, although that is not meant to take anything away from the Kickin' Canuck. 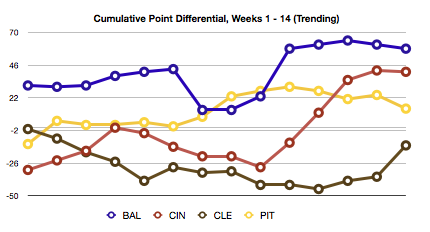 That will do it. See you same time next week, rain or shine, snow or sleet, because unlike our postal workers I don't have to go outside...