In which we see the push for the finish line, and how well it is working out...

Share All sharing options for: A Comparison of the 21st Century Steelers Super Bowl Teams: Game 13

It would have been really nice if we could have seen a W in all four lines in the W/L column, but that's water under the bridge now. (Isn't water under a bridge usually there because of Rivers?) (Sorry, I'm desperate here...)

Let's look at each game in a bit of detail. There are some really interesting takeaways from last weeks' games, literally and figuratively.

The Bears entered Heinz Field with an eight-game winning streak. They left with their tail between their legs. Jerome Bettis, who had been held to 22 yards in 14 carries in the previous two games combined rushed for over 100 yards in a game for the first time since the previous December. The Bears, led by rookie Kyle Orton, were a defense-based team, and the top-rated defense was having a bad day. Unfortunately for them, thanks to the Steelers defense, the offense was incapable of stepping up to the plate. Although the Bears scored a field goal during the first quarter, they never sniffed the board again until the last minute and a half of the game. Even then, the rushing touchdown was only worth six, as their kicker missed the extra point. It was just one of those days.

Ben Roethlisberger, still favoring his fractured thumb, was taking no chances a week after throwing three interceptions. His one touchdown pass was on a screen to Hines Ward early in the first quarter. Bettis took over after that, scoring twice. The Steelers decided to emphasize the run game despite the fact Chicago was without both starting safeties.

Cincinnati was two games ahead of the Steelers for the division. This win put the Steelers in a four-way race for a wild-card spot. They trailed the Jaguars by a game and were tied with the Chiefs and the Chargers. They had the worst conference record of the four teams.

This was a seriously weird game. Both teams scored a field goal toward the end of the first quarter, first Pittsburgh and then Dallas, at 0:00 on the clock. Neither team scored again until the third quarter, when the Cowboys seemingly took over the game, scoring first a touchdown and then a field goal. But a fourth quarter field goal followed by a Heath Miller touchdown evened the score with just over two minutes left in the game, and Tony Romo began the game-winning drive. Or so he thought, until he threw the ball to DeShea Townsend, who accepted the gift, doubtless thanked Romo nicely, and took it in for a touchdown.

Pittsburgh's defense had not given up more than 300 yards in a game all season, the second-longest streak in league history since the merger. (Only the 1973 Rams were ahead of the Steelers, with 15 straight sub-300 games.) Dallas had an excellent defense that year, and held the Steelers' offense in check for the first 45 minutes of the game, but unfortunately for a desperate Dallas team, the game is 60 minutes long. (Dallas was 8-4 and needed a win to stay in the NFC wild-card race.) Quarterback Tony Romo, who had thrown only one interception in the previous three games, threw three of them to the Steelers. Dallas also lost two fumbles in the first half, but the offense didn't garner any points from those four turnovers. Townsend probably figured the only way to make anything of the one he caught was to run it back himself.

James Harrison recorded his 15th sack of the season, tying the team single-season record set by Mike Merriweather. DeMarcus Ware recorded his 16th sack in this game. With this win Mike Tomlin became the first Steelers head coach to win at least 10 games in each of his first two seasons.

My eldest son was living in Dallas when this game was played, and watched it at the home of some friends, all of whom were Cowboy fans. Naturally he took a good deal of what purported to be good-natured harassment during the first 50 minutes or so of the game, but he said things got very quiet in the last few minutes. He politely thanked his host and left without comment immediately after the game, as he was seriously outmanned...

If the Dallas game was weird, this game was seriously disturbing. The Steelers, although they did not record a single offensive touchdown, won the game handily, thanks to three Shaun Suisham field goals, a Troy Polamalu pick-6, and a LaMarr Woodley pick-6. Troy's pick-6, one of his more famous interception returns, ended in him flying across the goal line, arms outstretch, to make certain the ball broke the plane. But a tackle attempt by the last possible defender, college roommate Carson Palmer, was the start of "The Troubles" for Polamalu. How many completely healthy games has he played since then? Not a whole lot, I would argue. (Palmer threw three interceptions during the course of the game, including one to end it. His buddy Troy also caught that one.)

The Steelers offense was dominant, if you consider hogging the ball for 34 and a half minutes of the game dominant. But unfortunately they did so with the following results: 4:32 drive, punt; 1:42 drive, punt; 4:21 drive, punt; 2:00 drive, FG, 6:26 drive, FG; 9:22 drive, punt; 4:16 drive, FG; 1:52 drive, punt. The first offensive score came at the end of the second half. To be fair, Ben Roethlisberger was playing in the outsized shoe with the steel plate to protect his broken foot, and with a helmet with a visor to protect his broken nose. The Bengals' defenders weren't at all worried about the possibility of exacerbating Roethlisberger's ailments, with three different defensive players hitting him on a single play before he got loose to throw a short pass.

This game would end up being the 10th loss in a row for the Bengals, tying a franchise record. The sole score was a pass to offensive tackle Andrew Whitworth. It was the first Steelers game with two interception returns for a touchdown since 1998.

We all know about Sunday, and how it came out. But what we would all like to know is, why? Why is this team so inconsistent? Ben Roethlisberger was asked, and said, "I have no clue. If I knew I don't think we'd do it anymore. I thought we'd play better."

In his first game back from the SC joint/rib injury which sidelined him for a month, Roethlisberger seemed out of rhythm with his offense for much of the game. Nonetheless, he played well enough to receive a respectable 89.7 NFL passer rating and the second best passer rating for the week from Pro Football Focus (100.3,) right behind Robert Griffen III.

The offense did manage to generate 24 points, but the defense, whose average coming into the game was 19.2 points given up, gifted 34 points to the Chargers. Being without Ike Taylor turned out to be more problematic than anticipated, apparently, as Cortez Allen and Curtis Brown gave up completion after completion.

But perhaps this is a case of "least said, soonest mended." The Steelers are still in position for a wild card, but have little margin for error in the last three games of the season. Rather like the 2005 Steelers, actually. As we look at the three Super Bowl teams we can see just how dependent they were on a dominant defense. Steeler Nation keeps thinking that as the stars of old gradually drop away the young offense will pick up the slack. But a combination of injuries on the offensive line and to the quarterback(s), combined with what I assume must be some sort of group psychology issues amongst the receivers have prevented this from happening so far. The defense has, somewhat grudgingly, been picking up their burden once more. The fate of the remainder of this season hinges upon whether one or both groups (or even, mirabile dictu, special teams) can haul this team into the playoffs. (And to be fair to special teams, the most consistent and reliable player this season has been kicker Shaun Suisham.)

On to the stats. 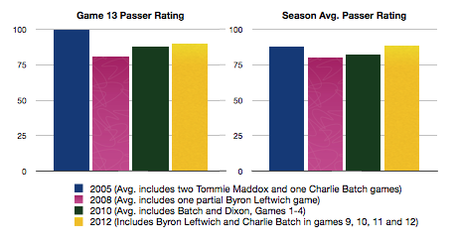 Despite some truly awful games by Leftwich and Batch this season, the 2012 passer average is at the head of the pack. Back before the Chiefs game I decided to average only the ratings for Ben Roethlisberger each season. I obviously suspended it while he was out this season, but it's back. The only season Roethlisberger started every game was 2008. Curiously, it is his worst season statistically. (Byron Leftwich played in part of one game in 2008, but that is not included in the ratings.) At this point in the season Rothlisberger had played nine games in 2005 and 2010, and of course has started 10 games this season, although he only played just over half of the Chiefs game. Here's how he compares to himself: 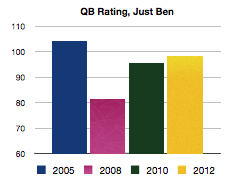 The season averages remain very similar for both rushing and passing. Next is the ratio of run plays to pass plays. The top row is for Game 13, the bottom row is the total yards for the season. Black is rushing, yellow is passing. 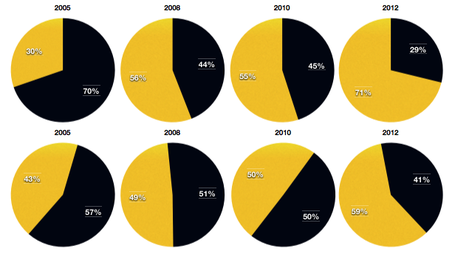 Interesting to note that the season average in 2010 under the despised Bruce Arians was exactly 50/50. 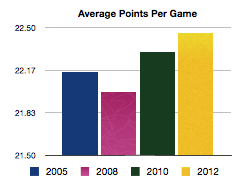 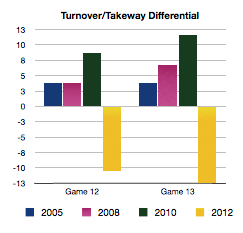 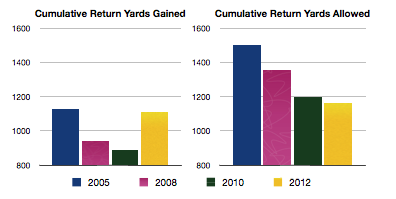 Here's the cumulative bar chart, but I decided it was easier to see as a pie chart. The darker color in each case is the yards given up:

As you can see, the 2012 Special Teams is the closest to even, by a good bit. Now that you can see it this way, BTW, has anyone worked out the reason for the color scheme?

This is perhaps the best illustration of the difference between the current team and the previous clubs. The 2012 Steelers are headed the wrong direction, especially as it is December. Where there's life, there's hope, but the Bengals' blowout of the hapless Eagles tonight makes it all the more incumbent upon the Steelers to come out with their dukes up on Sunday.

That's all for now. Go Steelers!