In which we look at the continuing implosion of the Ravens and Steelers, the Browns are officially eliminated from a playoff spot, and the Bengals are king in the land of the blind.

ESPN had a great picture of Joe Flacco face-down on the ground. I would have used it if it had been in the photo choices, not to make fun of the Ravens' quarterback, but because it is such a great metaphor for the AFC North lately. Here's how it stands at present:

Gloom and doom is prevailing amongst discerning AFC North fans. Changing the offensive coordinator in Baltimore doesn't appear to have jump-started the offense. The Bengals, the only team with a win in Week 15, didn't so much win as allow the Eagles to thrust a win upon them. The Browns got to play the Redskins without RGIII, who was removed from the game courtesy of the Ravens the previous week. Nonetheless, they couldn't beat a fourth-round rookie quarterback making his first NFL start. And the Steelers seemed determined to raise the self-esteem of the Cowboys by trailing for most of the game, coming back at the end and hanging on the precipice of winning, and throwing it away in overtime. This will probably not go down in NFL history as one of the more inspiring weeks in the AFC North body of work.

So what happened? Let's begin with the sole winning team. Or perhaps they should be called the sole "not-losing" team. As Jamison Hensley wrote:

The Bengals didn't win this game. They leave with a victory because they were lucky enough to run into a team that played sloppier than they did. This was an early holiday present from a dysfunctional Eagles team.

As anyone unfortunate enough to waste several valuable hours of their life on this game will all-too-vividly remember, the Eagles, after showing some promise, gave the game away with an unbelievable four turnovers within five minutes. But the Bengals' defense had something to do with the turnovers, after all. CB Leon Hall picked off Nick Foles and returned it 44 yards. On the Eagles' next possession Foles' fumble was returned for a touchdown by Wallace Gilberry. On their next possession Chris Crocker recovered another Foles fumble. And on the next kickoff the return muffed the catch, which was recovered by Taylor Mays.

To the Cincinnati offenses' credit, they capitalized on the turnovers and turned them into points.The running game, which has steadily been improving, showed up again, with BenJarvus Green-Ellis running for 106 yards on 25 carries and a touchdown. (Green-Ellis now has a second 1000-yard game in his career.) Andy Dalton ran in a touchdown of his own and threw another to A.J. Green. Thus 24 of their 34 points came within a three and a half minute span.

So while a number of bone-headed penalties kept the score lower than it might have been, unlike the rest of the AFC North, the Bengals came away with a W.

This win gives the Bengals a half-game lead over the Steelers for an AFC wild-card slot. However, they have to beat Pittsburgh at Heinz Field next Sunday. Coming off a long week, with a relatively healthy team, it's pretty hard to bet against them at this point.

Now for the losers.

Baltimore increased their losing streak to three games, two of those at home, where they had been unbeatable until the Charlie Batch-led Steelers handed them their first loss in 16 home games. This was their first time losing two home games in a row since 2007. As Joe Flacco said after the game, "We're a 9-5 football team and we feel like we're 0-14 right now." The Broncos, who have never beaten the Ravens at M&T Bank Stadium since owner Pat Bowlen bought the team 29 years ago, gave the game ball to Bowlen.

The Ravens' new offensive coordinator, Jim Caldwell, was not a big success. Or at least his play calling wasn't. The offense produced a total 56 yards rushing and 254 yards in the air, with a pick-6 and a fumble for Joe Flacco.

The injuries just won't quit for the Ravens either. Although Terrell Suggs played with a torn biceps, his sole contribution was a tackle. During the game they lost Jameel McClain for the rest of the season, not good news for a seriously depleted defense. Bernard Pierce and Torrey Smith both left the game with concussions.

It wasn't all bad. Ray Rice passed 1000 yards rushing for his fourth straight season. However, he did so in 12 total carries, for 38 yards. TE Dennis Pitta had a career day, with seven catches for 125 yards. And despite the loss, because the Steelers lost the Ravens clinched a playoff spot.

The Browns had snookered their fans into cautious optimism. After a couple of wins combined with numerous losses by the other division teams it seemed as if they had a chance at the playoffs. Sunday's game dashed those hopes to the ground. Brandon Weeden had another bad day, while his Washington counterpart, rookie Kirk Cousins, led the Redskins to victory on the Browns' home turf. Trent Richardson continued to impress with two rushing touchdowns, but it wasn't enough on a day Alfred Morris also put up two for the Redskins.

The Steelers had never won in Jerryworld, er, Cowboys Stadium, and they still haven't. Despite a game filled with mistakes, they were in position to do so in the waning minutes of the game. A couple more mistakes put paid to that notion, and a Ben Roethlisberger interception on the second play of the first drive of overtime gave the Cowboys the W both teams badly needed. The Steelers have to hope they have made all of their mistakes for the season now, as there is no room for error if they wish to take the wild-card spot from the Bengals. Their even further-depleted secondary and the continued injuries in the offensive skill positions make this an interesting proposition. The big question is, if they get a wild-card spot, can they do anything with it? Only time will tell, on either question.

On to the stats, which are comfortingly reliable in the shifting sands of the AFC North.

Roethlisberger is currently 9th in the PFF ranking, followed by Andy Dalton at 16th, Joe Flacco at 23rd, and Brandon Weeden at 26th. 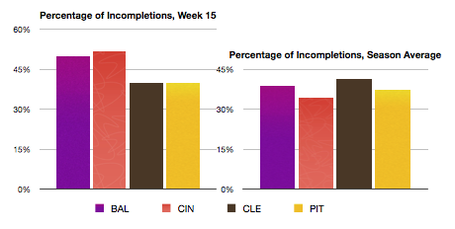 The Browns and the Steelers had the best week, drop-wise, but it wasn't great for anyone, on the surface. Here's the PFF drop rates for the most-targeted receivers: 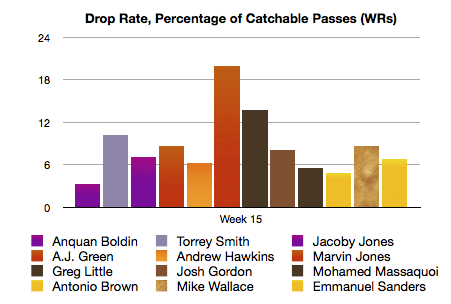 And here they are for the tight ends: 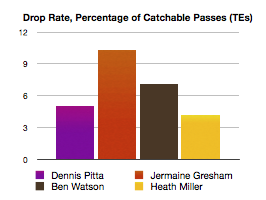 Heath Miller is back to dominating this stat. HEEEAATTHH...

(Calculated by averaging the ranking for average yards/game and average points/game given up.)

Here's trending for both stats: 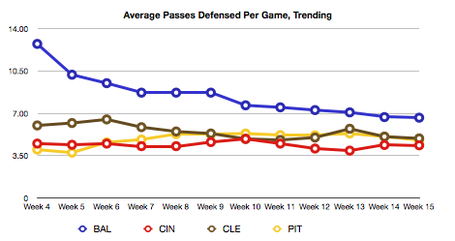 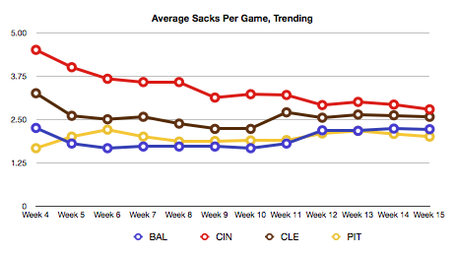 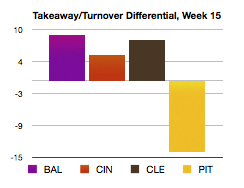 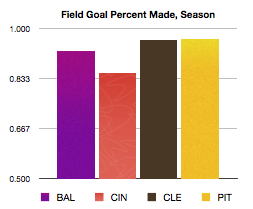 That's it for this week. Next week will answer a lot of questions. Can Antonio Brown hang on to the ball? Can the Ravens and the Steelers field a full defensive complement without recruiting from local high schools? Can the Bengals beat the Steelers in Heinz Field? Are the Ravens worse than the Giants, or vice versa? Or is this the curse of the Terrible Towel, slowly taking its revenge? Can Pat Shurmer keep his job? Tune in for this and other breaking news and don't touch that dial!