In which we find out how December football is supposed to be played.

Share All sharing options for: A Comparison of the 21st Century Steelers Super Bowl Teams: Game 14

As usual, let's begin with the Record:

Four teams—two wins, two losses. The two wins are marked, however, by a great defensive effort rather than any prodigious outpouring of offense. The two loss were marked by momentary lapses which added up to an L. Let's see how they all went down:

Pittsburgh traveled to Minneapolis to play a Vikings teams possessed of a six-game winning streak. Offensive points were few and far between in what turned out to be an defensive slugfest. Pittsburgh was the more desperate of the two teams, as any hopes of making the playoffs were predicated upon winning out. The final score of 18-3 was made on the Pittsburgh side by three Jeff Reed field goals, a Ben Roethlisberger 3-yard run for a touchdown, and a safety. (Larry Foote and Joey Porter were responsible for the safety.) The defense forced three turnovers in addition to the safety.

The offense wasn't completely ineffective. The Pittsburgh offense, that is. Willie Parker had a good game, running the ball for 81 yards on 14 carries. Heath Miller caught a 50-yard pass to set up the first field goal. But in the end the game came down to a good old defensive beatdown, as the Steelers held the Vikings to a single field goal. The sole Minnesota score came on a muffed Antwaan Randle El punt return which gave the Vikings the ball at the Steelers' 3-yard line. The Vikings were held to 25 total yards in the second half of the game.

"I can't say enough about the 'D'," Roethlisberger said. "It was amazing today. So much fun to watch."

The 2008 Steelers clinched consecutive division titles with this 13-9 win against the Baltimore Ravens. However, in typical fashion, they kept their loyal fans glued to the television set, knuckles white, as they watched Santonio Holmes catch a 4-yard touchdown pass with 43 seconds for the go-ahead score. It was the first time the Steelers held the lead in the game, and the fourth time they had won by four or less points for the season.

The top-rated Steelers defense only allowed 202 yards to the Ravens, a season low. Rookie quarterback Joe Flacco threw 11 completions in 28 attempts, for 115 yards and two interceptions. He was disappointed but not dismayed: "We'll be fine." The leader of the top-rated Ravens defense, Ray Lewis, was less philosophical: "All game they didn't make plays. One drive they did." He was clearly frustrated, as were many other Ravens players, leading to a scrum which earned Haloti Ngata a 15-yard penalty. As Ben Roethlisberger said, "This was your typical Ravens-Steelers football game. I've got cuts and bruises as do other guys in [our] locker room, and I'm sure they do. It was physical, low-scoring -- just like everyone thought it was going to be."

There's a strange feeling of familiarity in the write-ups for this game, as one reads statements such as "Despite a recent rough stretch for Mark Sanchez, the Jets say they never lost faith in their QB," (writer Jane McManus) or "It's been a tough couple of weeks, but when he stood up in that huddle and he said, 'I'm going to play better. I'm not going to continue to turn the ball over' ... you had to believe the guy." (RB LaDainian Tomlinson) It seems to be a yearly rite of passage for Sanchez and the Jets. Head coach Rex Ryan had his own little rite, standing in shirtsleeves on the sideline in 25-degree weather, snow falling gently onto his exposed flesh. (Mike Tomlin was wearing his famous puffy coat IIRC.)

The Jets were coming off of disastrous losses to New England and Miami, and it was a must-win game for them. They were also 0-7 in Pittsburgh since the merger.

Santonio Holmes, who was traded away to the Jets during the off-season for a pack of chewing gum and a slightly used commemorative Star Wars light-sabre, returned to Heinz Field hoping to show the Steelers what they were missing. He ended the day with six catches for 40 yards.

The Steelers actually led the game briefly in the third quarter, 17-10, despite an 97-yard kick return for a touchdown by Jets returner Brad Smith which put the Steelers behind from the first play of the game. But the vaunted Steelers defense couldn't hold the lead. During the game Mark Sanchez was sacked only once and didn't get picked off for the first time in nine games.

Although this loss put the Steelers at 10-6, because of a complicated scenario of strength-of-schedule tie-breakers, the Steelers were guaranteed a play-off spot.

For the second time in three years the Steelers headed to Cowboy Stadium for an important game they failed to win. But this time they were playing the Cowboys rather than the Packers. That seemed like it ought to be the easier task, but for the second time the Steelers were in position to win the game at the end of regulation and couldn't close the deal because of a fumble. This time it was Antonio Brown, who had the ball punched out at the end of a long return. In 2010 it was Rashard Mendenhall losing a fumble forced by Clay Matthews. Unlike the 2010 Super Bowl team, the 2012 Steelers managed to force overtime, but it didn't last long. Ben Roethlisberger has the lowest number of interceptions this season of any of the four years, but a couple of them have been really poorly timed.

However, the game featured one shining moment, when Ben Roethlisberger scrambled around for 8.9 seconds, eluding at least two potential sacks, to connect with Heath Miller for a touchdown. If they couldn't win, at least they made it entertaining... 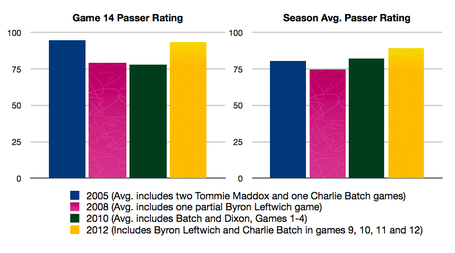 Other than 2008, as you can see the backups played a substantial amount of time. So I decided to keep track of Ben's QB rating average each year, without diluting it with other passers. Here it is—note the top number on the chart is 110 rather than 100 on the chart above. 2008 wasn't a great year for him... 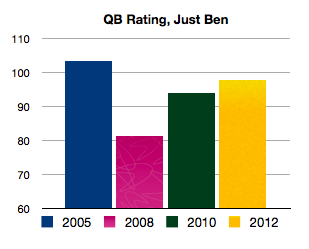 On to the other offensive stats:

it's interesting to me that despite the individual variation between games the averages are so close for all four teams. Same with rushing:

Here's the ratio between passing attempts and rushing attempts. The top line is Game 14, the bottom the season average. Black is rushing, gold passing: 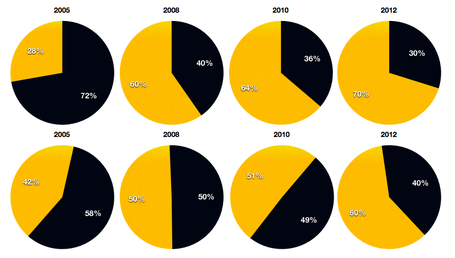 The 2012 average is not what many of us expected to see in the new Todd Haley offense... 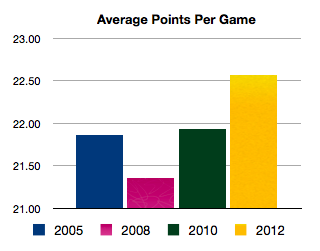 From the virtual tie between the four teams a few weeks ago things have opened up a bit, and the 2012 team is beating everyone else by more than half a point! Unfortunately their win-loss record doesn't reflect this dominance in the points stat. 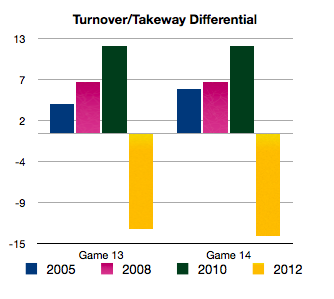 This is the ratio between the Special Teams yards given up and gained. Darker is given up.

The 2012 team is teetering on the verge of irrelevancy. Hopefully they can put that off for one more week this Sunday...