As Steeler Nation begins to look forward to next season, the NFL reveals some relevant financial information regarding caps and tags.

At the owner's meetings earlier this month, determining the new salary cap and tag amounts were discussed. The results of the meetings confirmed what many believed would already be the case. While the total cap figure has yet to be set in stone, it is expected to be no higher than $400,000 more than 2012's figure of $120.6 million.

At the moment, the league is claiming the new total to be $121 million. However, the league cannot provide a concrete figure until the league season has concluded, meaning every team has made every roster move they are going to make under this year's parameters.

As with the total team cap, individual franchise and transition tag levels have been given values, although they too are subject to change. Tag amounts by position are as follows, in millions. 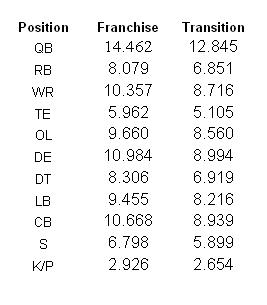 In the same tentative tone, restricted free agent tenders will remain approximately similar. In 2012, minimum "right to match" level stood at $1.26 million, while the maximum compensatory level was set at $2.742 million.

League years, in terms of the collective bargaining agreement, run from March 1st to March 1st. When the 2012 league year is ended and the 2013 league year begins, the finalized numbers will be distributed.