In which the Ravens once again look like a championship team, the Bengals and Steelers throttle each other until one of them chokes, and the Browns deal Pat Shurmer what was probably a fatal blow.

Share All sharing options for: AFC North Roundup: The Rise and Fall Edition

Here are the current standings:

The AFC North entered last Sunday with two teams needing to win their game to keep their playoff hopes alive—the Bengals and Steelers both had a must-win game. Unfortunately they were playing each other, which meant one was bound to come up short. In the event, it was the Steelers who did so. Their defenses both played very well, but the Steelers played perhaps their best defensive game of the year, even with a decimated backfield. They held the Bengals' running backs to an unbelievable 14 yards on 16 carries, for a .9 average gain per carry. They set season highs in sacks (six) and passes defensed (nine.) But no amount of defensive awesomeness can overcome the way the offense mostly played.

Special teams looks like a goat when you look at the numbers, but the Pittsburgh kicking and gunner teams held the Bengals to two total return yards. The game featured three missed field goals between the two kickers. None of the three were really the fault of the kickers. Two of them (one by Pittsburgh's Shaun Suisham and one by Bengals kicker Josh Brown) were longer than the longest NFL field goal ever made at Heinz Field, and were straight but short, and an easy Suisham attempt was low because of a bad snap and consequently tipped.

The other two teams were playing for pride. The Browns were mathematically eliminated from any chances of making the playoffs the previous week, but have been playing pretty well as of late, and would have liked to have pulled out a win. Unfortunately, the team they faced was the Broncos, and Peyton Manning appeared to be the Peyton Manning of days of yore, zipping passes into the arms of blanketed receivers and generally doing whatever he liked. He threw for a season-high 339 yards, with three touchdowns, giving the Broncos 10 wins in a row. A Von Miller sack of Brandon Weeden sent him out of the game with a shoulder injury, and Colt McCoy finished the game. This didn't really improve things, as the offense never really got anything going. Trent Richardson, however, now has the most yards of any rookie Browns player, so that's something.

The Ravens, on the other hand, were guaranteed a playoff spot, but didn't look like a playoff team. They were even possibly fighting for the division crown, which had seemed assured a month ago. They welcomed the defending Super Bowl New York Giants into their house, and proceeded to embarrass them. All facets of the team played well, furthermore, which is always encouraging. The offense accumulated a season-high 533 yards. Special teams did their job, and the defense held Eli Manning to 150 yards and one touchdown. They now have the hat and the t-shirt, and presumably are focusing on the Lombardi. They have to get past some teams who have looked a lot better than they have most of the year, however.

Let's look at the stats:

Ben Roethlisberger is still overall the best, despite a disastrous Week 16 outing. Not that it does the 2012 Steelers much good...

This week I decided to add the number of touchdowns thrown as well for each passer—it is the second number, and the third number is TDs to INT:

It's interesting how lopsided this stat was earlier in the season. Brandon Weeden began the season with four interceptions in the first game alone, but fortunately the rate slowed drastically. His rate of touchdowns to interceptions is still pretty bad, however, being less than one touchdown for each interception. Andy Dalton did better than that, but wasn't impressive. Ben Roethlisberger has had a great year in this stat, and although his 2.875 rate doesn't match the leaders in the league this year, Aaron Rodgers, Robert Griffin III, and Tom Brady (each of whom threw at least 4 TD passes per interception,) it is just below Peyton Manning's 3+. Now if Ben can just keep from throwing a few more on Sunday... 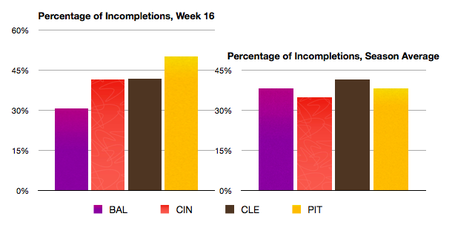 Interestingly, although the number of incompletions has fluctuated a great deal during the season, the average is reasonably close as the season draws to a close. Cleveland still leads the AFC North in drops. But are those real drops? Here is the Pro Football Focus drop rate (adjusted for whether a ball was really determined to be catchable or not) for the three principal wideouts on each team: 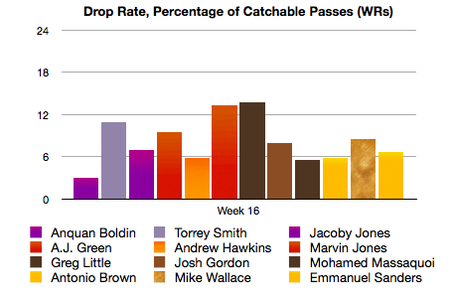 Cincinnati, whose receivers were so good for so long, has proven to have feet of clay. The Pittsburgh receivers have been making their way back towards respectability. Anquan Boldin is the man. Enough said. 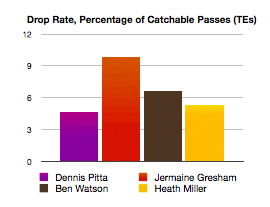 As we can see, the TEs are still more reliable, except for Jermaine Gresham. If Marvin Lewis wants my opinion (and I doubt he does) he needs to get Andy Dalton a truly reliable TE.

To give the Pittsburgh defense its due, check out the Bengals' rushing numbers...

Well, defense may win championships, but you have to have enough offense to get there. 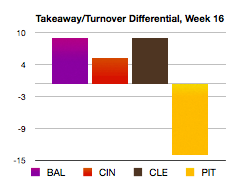 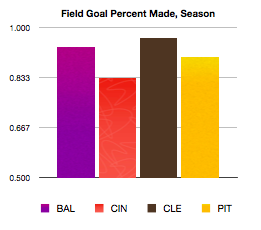 This stat makes me very sad. Shaun Suisham doesn't deserve the dive his stats took this week. But that's life in a team sport, even in a position which is so likely to make one the goat sooner or later.

The season, summed up in one little chart...

That's it until next week.