In which the rich get richer, and the poor get poorer...

Share All sharing options for: A Comparison of the 21st Century Steelers Super Bowl Teams: Game 15

Two home games, two away games, and a win and a loss for each. A loss at 11-3 doesn't have quite the same feel as a loss at 7-7, though. And, not surprisingly, the arrow is not pointing up for the 7-8 team. But let's take a closer look at each game:

As the AP recap noted, the game was over when it started. The Pittsburgh defense, which had held opponents to 12 total points in the previous two games, held Cleveland to none at all. Cleveland's rookie quarterback was sacked eight times, as was a Browns fan who was foolish enough to venture onto the field. James Harrison was not amused. I, on the other hand, find it quite amusing. The video never gets old!

The offense played well too, especially in the first quarter. During the first quarter, Pittsburgh outgained Cleveland 196-1, passed for 162 yards compared to minus two yards for the Browns, and made nine first downs, compared to 0 for Cleveland. During the game Willie Parker picked up 130 yards and Jerome Bettis ran in a touchdown. Hines Ward caught the sole touchdown pass.

Ironically, despite their 10-5 record, the 2005 team still had to win their next game to clinch a playoff spot.

Pittsburgh went into the Titan's stadium 1-6 against the team, and left 1-7 against them. Kerry Collins also remained undefeated against the Steelers. The Titans improved to 13-2, holding the best record in the AFC, and clinching the No. 1 seed and home-field advantage throughout the playoffs.

The Titans, who considered they were building momentum with this win, let hubris get the better of them, as several players disrespected a Terrible Towel. Linebacker Keith Bulluck, who stamped on a towel at the end of the game, noted the victory "sets the tone for the playoffs in the AFC." Little did Bulluck know his team would not win another game until, after a streak of utter futility in 2009, he and fellow towel desecrator Lendale White autographed a towel and sent it to the Allegheny Valley School to be auctioned off for charity. (The Titans lost their Week 17 game to the Colts, 23-0, and lost to the Ravens in their first playoff game. That was also their last playoff game ever, at least until now. (They have a marginal chance to make the playoffs this season.)

The Steelers, meanwhile, turned the ball over four times, resulting in 21 Titans points. It wasn't all bad, though—James Harrison his 16th sack of the season, setting a Pittsburgh record.

After being embarrassed the previous week by the Jets, the Steelers made short work of dispatching a weak Panthers team. This win, combined with a win in Cleveland in Game 16, guaranteed the Steelers the AFC North title and a bye week. A badly needed bye week, as the team was pretty beat up.

The Steelers outgained the Panthers 408-119. The defense held running back Jonathan Stewart, who was averaging 115 yards in the previous four games, to 71 yards. (At this point the defense had allowed one 100-yard rusher in their previous 49 games.) The Panthers never scored until halfway through the fourth quarter.

This wasn't a big surprise, however. The Panthers were the NFL's only team to lose every road game in 2010. Carolina had lost their previous seven games vs. AFC teams, and the Steelers had beaten the Panthers in the previous three games, outscoring them 101-37. This brought the tally to 124-40.

Quarterback Jimmy Clausen was upset when they managed to move to the Pittsburgh 34 in their opening drive, only to have the punt team sent out on 4th and 6. Clausen noted after the game, "I thought offensively we came out fast, running the ball well, got a few first downs quick. And just from there, I don't know what happened." Whatever it was that happened, it resulted in them gaining zero net yards and not a single first down from the end of the first quarter until the final minute of the third.

Conversely, Rashard Mendenhall ran for 35 yards on Pittsburgh's first play from scrimmage, and although a Carolina challenge of a Sanders touchdown catch reversed the ruling, they never struggled to score. After only scoring four offensive touchdowns in the previous four games, the offense picked up three touchdowns in the game. Mike Wallace ended the game with four catches for 104 yards, earning his sixth 100-yard receiving game. This put him within one game of John Stallworth's team record. Mike Tomlin commented after the game, "I like where he is right now, but he is capable of more. There's more out there for him." I kind of feel like we're still waiting...

Pain. Agony. Loss. No playoffs. The end.
But ya know, sometimes it just isn't your year. As I reflect on the roller-coaster season we have been through, what is most striking is how close the team was to greatness. Last Sunday's game was one of the most awesome displays of defense you will ever see. Earlier in the season the offense was putting up 30+ points against crappy teams and the defense couldn't close the deal. Special teams has, for the most part, improved all out of recognition as the season progressed. And yet they couldn't seem to fire on all cylinders all at once.
Perhaps the one play call which could have changed the course of the season was a run on 3rd-and-short, early in the third quarter of the Chiefs game. Well, hindsight is 20-20.
Now to return to the comforting bosom of the stats.
Offense: 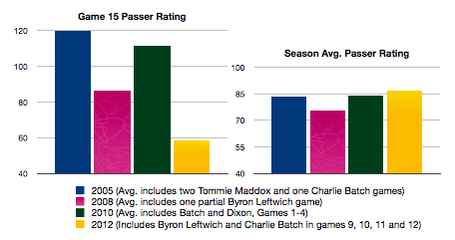 Because Ben Roethlisberger only started all 16 games one season (2008,) I decided to also chart just Ben's passer rating. Here it is: 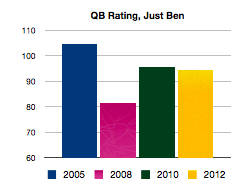 After a stellar Game 15 the 2010 Ben passed up the 2012 version for second place. I don't see that changing next week, either...
Here's the offensive stats: 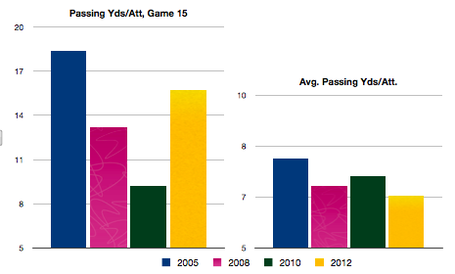 I find it interesting that despite the fact the earlier Steelers were supposedly a ground and pound team, the average gain per rushing play is very similar. Here's where it differs: 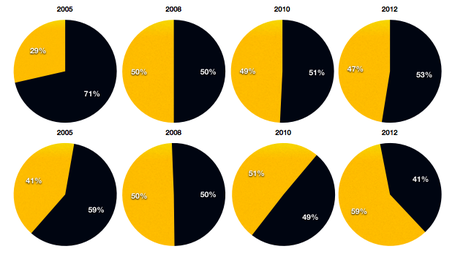 The top line is Game 15, the bottom line the season average. Black is rushing. 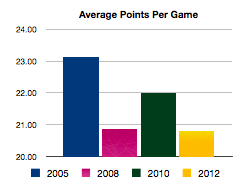 The Game 15 chart doesn't do justice to the incredible game played by the decimated defensive backfield last Sunday. 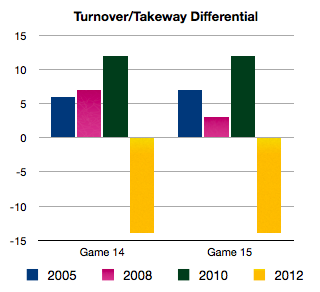 Once again, this is the really big difference between the 2012 defense and the championship teams. And, ironically, just as the defense has begun to take the ball away a bit more, the offense has been giving it back. Ben Roethlisberger only had four interceptions before the Kansas City Chiefs sidelined him—he now has five in the past three games. And of course there was Cleveland Fumblefest 2012. Must stop thinking about that.
Special Teams: 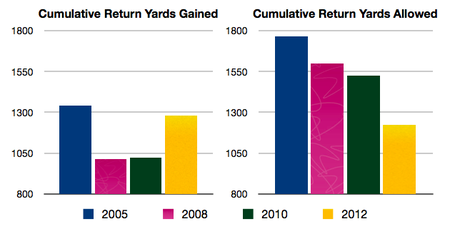 After a poor start to the season defensively (where have we heard this before?) Special Teams have really rounded into form. While giving up the least total yards, by far, they have gained more than any team but the 2005 Steelers. And the penalties which negated several returns for a touchdown have quit, as well. I've seen a lot of comments about the firing of Al Everest, but looking at the numbers, you would have to think it was a good move. This stat has gradually improved throughout the season.

Here's the proof in the pudding. The darker color in each case is the number of yards given up. Only the 2012 Steelers have a positive ratio of yards gained to given up.

Another chart that tells the tale. The 2012 Steelers settled for a few too many field goals. Had a select two or three field goals been touchdowns instead, the team would be headed for the playoffs, or at the very least for a meaningful Game 16.

I noted last week the 2012 Steelers were teetering on the edge of irrelevance. There you see it. It's interesting to see graphically the effect of Ben's injury in Week 9.
That's all for this week. Tomorrow evening either the "Beat Cleveland and preserve some dignity" or the "Lose to Cleveland and pick up four draft spots" crowd will be happy, so that's something. It's seldom in a Steelers season that either outcome to a game pleases at least a portion of Steeler Nation...