AFC North Roundup: Pull Out the Fork, They're Not Done Yet Edition

Share All sharing options for: AFC North Roundup: Pull Out the Fork, They're Not Done Yet Edition

It was a foregone conclusion. The Ravens are officially unbeatable at home. They were going to lock up a playoff berth on Sunday versus the reeling Steelers. After all, Pittsburgh was down to its third-string quarterback, a player who was drafted about the same time as Methusalah. The offensive line was on their fourth re-configuration for the season, one which included a seventh-round rookie development project making his first start at right tackle and the Steelers' Pro Bowl center moving to left guard for the first time since, basically, his freshman year of college, putting a journeyman UDFA at center. A fumble-and-drop-prone wide receiver corps continued in their drop-and-fumble-prone ways. The too-old and too-slow defense was without Pro Bowl OLB LaMarr Woodley once again, and lost one of its best players early in the game in cornerback Ike Taylor.

Conversely, Ravens running back Ray Rice, he of the 4th-and-29 fame, was licking his chops. And speaking of chops, the Ravens' offensive line was preparing to chop-block the heck out of the Steelers' old-and-done nose tackle Casey Hampton, as a nice break from fullback Vonta Leach blowing him up. Not many people gave the Steelers a chance to even lose the game by the usual three points.

But the people who mattered on Sunday were the Steelers themselves, and they believed in the antique quarterback and their old-and-done nose tackle and their backups, and by gum, they were right to do so. It wasn't an error-free game by any means. There were some mistakes which could have cost them the game: Cortez Allen's PI penalty, Emmanuel Sanders' fumble of a sure touchdown, Charlie Batch's pick to Ed Reed in the end zone, and too many more to mention, as they say in garage sale ads. And yet they pulled it out, and Shaun Suisham, the kicker nobody wanted, kicked the winning field goal from 42 yards as the clock expired, giving him a 96.0 percentage on the season. It's like a made-for-TV movie, only in the movie the frequent fisticuffs, which began on the opening touchback, would have been allowed to continue for longer.

During the game, Ray Rice ran in his 32nd rushing touchdown, putting him in sole second place for the Ravens. (He was previously tied with Willis McGehee.) Heath Miller's touchdown made him the team leader for the Steelers, breaking his tie with Elbie Nichols.

Charlie Batch is in contention for the FedEx Never Say Never Moment. You can vote for him here.

The Bengals, after some mid-season doldrums, are hot again, and even what might have been a disastrous pick-6 of Andy Dalton didn't faze Cincinnati. Despite the offense helping out the struggling Chargers with various miscues, the defense picked up the pieces and gave their offense another chance to win. They forced Philip Rivers to cough it up twice in the last four minutes of the game. The Cincinnati defense shut the Chargers out in the second half. Running back BenJarvus Green-Ellis rushed for 118 yards on 25 carries. He is a nominee for the Fed-Ex Ground NFL Player of the Week for the third week in a row, and is starting to show why the Bengals brought him in.

Although the offense has some cleaning up to do, great defense kept them in the game. One might view it as AFC North-style football. And speaking of AFC North-style, Bengals fan Nick Lachey managed to get himself ejected from Qualcomm Stadium after an altercation with a Chargers fan, which says something. I'm just not sure what.

The Cleveland Browns are featuring a much-improved offense, with stud running back Trent Richardson seemingly more healthy each week and rookie quarterback Brandon Weeden making less rookie mistakes as the season progresses. Of course, it didn't hurt to be playing the Raiders. As Raiders cornerback Michael Huff said, "We can't stop the run, we can't stop the pass. Right now, I guess we're just a bad defense." Seems accurate.

For the first time this season Phil Dawson missed a field goal attempt. However, it wasn't a miss per se, but blocked by Desmond Bryant. Dawson had been perfect for 29 straight previous attempts dating back to last season. Sebastian Janikowksi converted his 40th field goal attempt from at least 50 yards, tied with Morten Anderson for the fourth-most all time. But he also had a miss, on a 61-yard attempt. What were they thinking? I guess they were thinking it had a better chance of success than the Chargers offense had converting a 4th-and-3 on the Cleveland 47 yard line.

On to the stats.

I decided to put in a place-holder for Ban Roethlisberger. So he's in gold, and Charlie is in black. And although Charlie's average is pretty bad, thanks to the disastrous Cleveland game, you may notice the Pittsburgh Quarterbacks-by-committee have still outplayed everyone except Andy Dalton. Here's Trending: 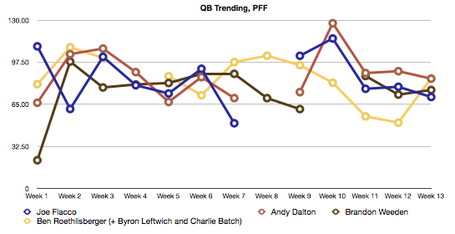 Despite some poor throws in the first half and a pick, Charlie Batch was the winning quarterback in Week 13, either by the NFL rating or the PFF one.

Every team improved vastly from Week 12 with the obvious exception of Baltimore. (The Steelers' corners might have had a little bit to do with that.)

Here are the Pro Football Focus drop rates for the three most targeted wideouts on each team. (They are average rates for the season.) The No. 3 receiver has changed yet again on the Bengals, as rookie Mohamed Sanu is out for the season. Jones, not to put too fine a point on it, was dreadful, with the pick-6 actually being a tip out of his hands. This is not great for the Bengals, as Sanu was progressing nicely and had a 0.00 drop rate.

Note the TE chart ends at 12 percent, as opposed to 30 percent for the wideouts. 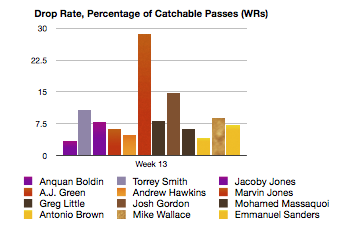 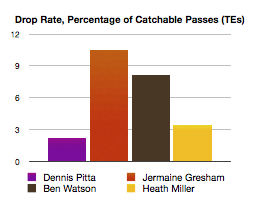 Note the huge uptick for the Ravens. The Week 13 figure for yards/attempt was 5.3. It boggles the mind why Cam Cameron didn't rush more—their 111 yards came on only 26 attempts, split between Ray Rice and Bernard Pierce. Maybe they are saving them for the playoffs. I believe the loss rate for the Ravens is minute if Ray Rice gets at least 20 touches in a game. Well, there are plenty of Ravens fans second-guessing their OC—I guess I don't need to add to the numbers. And believe me, I'm grateful : )

First, the NFL Ranking, which I calculate by averaging the NFL ranking for Average Yards per Game and Average Points per Game given up:

The Ravens and Steelers took a bit of a step back this week. The Steelers are still 20 yards per game ahead of their nearest competitor, San Francisco, but dropped behind Atlanta in points (19.1 vs. 19.2.) The Bengals continue to be upwardly mobile, as Mike Tomlin might say, and the Browns are firmly at the top of the lower half of the league.

It's interesting to plot the defenses through the season. Lower is better, as it is a ranking. (The ranking is the same average given above.)

It took Cincinnati longer to round into form than the Steelers, but they've been rapidly making up ground ever since. (Note the chart begins at Week 4, which is when I started keeping track of this.)

Although the Ravens have led for the season in Passes Defensed and the Bengals have led in sacks, this hasn't been static. I thought it would be interesting to look at the trends, starting from Week 4: 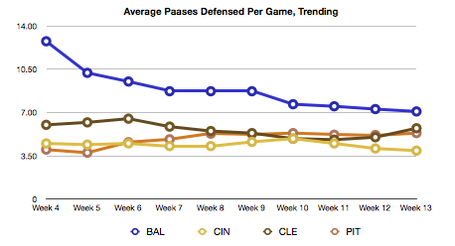 The Ravens lost Lardarius Webb in Week 6 and Jimmy Smith in Week 9. While Corey Graham has been an excellent replacement in many ways, he apparently isn't as good in passes defensed. The Browns also dealt with injuries in the secondary, finally getting everyone back for the Week 12 game against the Steelers. Note the trajectory.

The Cincinnati drop in sacks doesn't have as obvious an explanation, other than perhaps other teams have learned to limit their pass rush better. 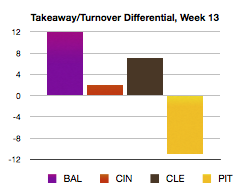 It's going to be a bit much to ask the Steelers defense to overcome the damage the eight turnovers in the Week 12 game did. That said, Cincinnati has come back from a differential of -7 in Week 6, so anything is possible, I suppose, as long as the Steelers offense stops turning over the ball. (Wide receivers, I'm looking at you...) 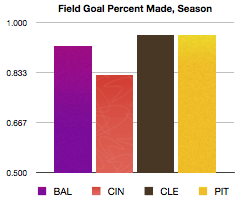 Shaun Suisham is officially in the lead, now edging Phil Dawson by .02 percent. Ironically, the only two kickers in the league to have played the whole season with perfect records were Dawson and Sebastian Janikowski. Each missed a kick in the match between the two teams. Neither can really be blamed, as the Dawson kick was blocked and the Janikowski kick was from 61 yards.

And finally, the Point Differential: 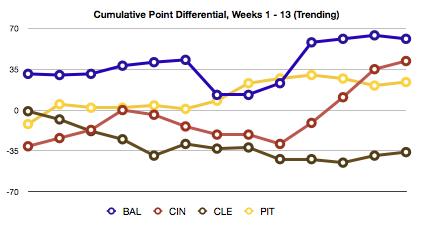 Since the spread is so large in the chart (140 points,) it is not entirely obvious, but despite the loss in Week 13 the Ravens are still 19 points ahead of Cincinnati, their closest competitor.

That's all for this week.