How about a thousand heartthrobs instead of a thousand pounds in the first three rounds?

This is the third season I have done mock drafts for the Steelers, and I’m pumped. This is an extremely deep draft in the type of talent I’m looking for. And what type of talent are we talking about? I’m drafting BLA, baby!

Best Looking player Available might not be a metric you see every day, but it was the one I chose when I first tried my hand at a mock draft. I don’t watch college football and I wasn’t sure I understood all of the arcane criteria the draft pundits used to grade players, so I decided to come up with my own. I was both surprised and pleased to find this report of a study funded by New Scientist. It concluded "The better an American football player is, the more attractive he is."

Bearing this in mind, let’s take a look at some fine young men who would bring both tangibles and intangibles to the field, and would look mighty good in the Black and Gold while they did it. Like most everyone else’s mocks, I’m going to assume the Steelers stay put and don’t make any trades.

The greatest difficulty in doing these mocks, other than the eyestrain, is the lack of agreement among the draft pundits upon whom I have to depend as to who are the best players. At the top of the draft there is little dispute. Every draft board I looked at had Andrew Luck at #1. Robert Griffin III was #2 in almost every case, assuming they had incorporated the St. Louis/Washington trade into the equation, and Matt Kalil was at #3. After that they often diverged quite a bit. I looked at seven recently updated big boards, and there were 38 different players slotted into the top 25 positions. Obviously some players are going to drop further than anticipated, which may mean a player I’ve eliminated from consideration is actually available to the Steelers. I’m going with the current majority wisdom, though, in the assumptions about who will be available at pick #24 in each round.

There are several needs begging to be addressed in the first round. I began my research by thinking about these needs. Yes, I draft according to BLA, just like the Steelers draft according to BPA. But like the Steelers I’m obviously going to give some positions more weight than others. There’s no point getting my heart set on a fine-looking cornerback or a natty wide receiver when the chances are almost nil he will be drafted by the Steelers. Here are the positions I particularly considered:

Although two recent first-round draft picks are already invested in the defensive line in Ziggy Hood and Cameron Heyward, NT is a popular position to push for this year. Certainly it will have to be addressed sooner rather than later, but is this the year, or the place, to try to fill the position? Dontari Poe, the man many wanted to see in a Steelers uniform, raised his stock dramatically at the combine. As a consequence, it seems hard to imagine he would make it past the middle of the first round. Jerel Worthy’s stock is rising, and he’s a good-looking young man as well. However, I have a feeling the Steelers are going to wait a year to draft their nose tackle of the future.

Clearly this position must be addressed. Unfortunately for me, the big eaters on the O line aren’t generally the best-looking men in the draft. Unfortunately for the Steelers, it looks like the two best guard prospects, David DeCastro and Cordy Glenn, will be gone. I did notice at least one writer mocking OT Jonathan Martin to the Steelers. Martin is definitely an upgrade, looks-wise, to Chris Kemoeatu, but most people seem to grade him as a top-15 pick.

There are several other options one could argue for here—safety, cornerback, and running back in particular. None of these seem likely to be addressed in the first round. There is only one safety projecting in the first round, and Mark Barron will likely be gone. Cornerback, after being a huge need for so long, is suddenly on the back burner after the Steelers took Cortez Allen and Curtis Brown last year. Especially if they resign William Gay it is hard to see them doing anything but taking a flyer on a late-round guy or a UDFA unless someone really exciting falls to them in a later round. As to running backs, Kevin Colbert et al appear to be satisfied with the current stable, even possibly without Mendenhall for the first bit of the season. So we’ll pass on these three positions, at least in the first round.

Conveniently for me, what appears to be left is ILB. In this recent article I defended taking an ILB in Round 1. The release of Farrior would indicate the Steelers are prepared to address this need in the draft. And this draft just happens to have two highly attractive prospects, if you get my drift.

Luke Kuechley is everything one could ask—high character, great player, and a fine-looking man. The likelihood of him falling to us seems to be extremely low. Fortunately, Dont’a Hightower should be waiting for his Steeler jersey when #24 hits the clock. Everything I read about him says "Steeler," and after studying him carefully everything also says "Momma’s Mock Draft #1 pick." So, ladies of Steeler nation, feast your eyes on this: 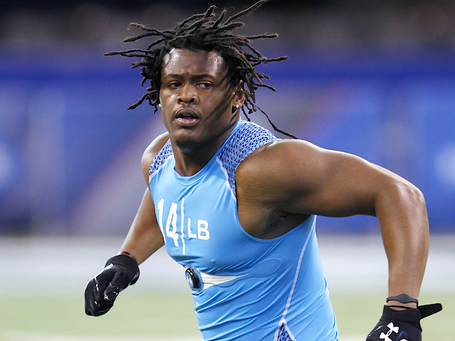 You’ll be happy to hear I’m not going to spend nearly as much time justifying later-round picks. I’ll confine myself to relating the virtues of the players who caught my eye.

In the 2nd round it’s time to face the music and look at the offensive line. And facing the music turns out to be simple—because my pick for Round 2 is an accomplished viola player as well as smart, high character, hard-working, and bursting with footbally-type skills. Yes, it’s OT Zebrie Sanders. And along with all of these fine attributes are a couple of intangibles. Given the spate of injuries along the O line in the past two years Sanders’ durability is extremely attractive—as is his endorsement-ready profile. Yes, I think a Steelers uniform would fit him like a glove. 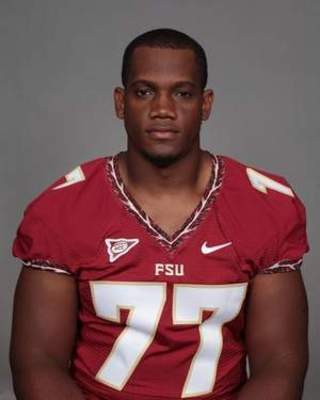 Strangely enough, after eschewing the O line I’m going back to the well to pick up an fine-looking young man with positional flexibility. In fact, his flexibility is perhaps the biggest knock against him, as some say he’s neither fish nor fowl. But with coaches and scouts saying things like "plays until the whistle blows and leaves it all on the field; positive attitude; leadership traits" it seems to me he’s a development project worth taking a flyer on. Have a look at OT/G James Brown: 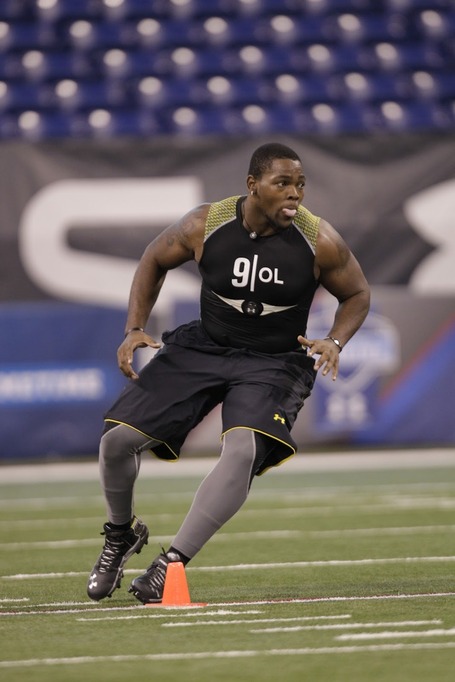 And that’s it for now. I’m going to have to retire to my couch for a few days with cucumber slices over my eyes before delving into the lower rounds. I'm always happy to remove the cucumber slices for a few minutes to read your comments, though!