However, the Steelers have not drafted particularly well in the later rounds. Although they have hit on a few major talents such as Brett Keisel (7th round) and Antonio Brown (6th round) their overall record is not impressive. (If you don’t believe me, watch this space for the final post of my serious draft series. It will be replete with graphs and charts and other nerdy stuff to demonstrate this.)

Which brings me to the point of today’s post. If the final result of all the scouting and visits and so forth is the worst record in the league for the 5th round, (really!), why not try BLA? After all, the Best Looking Player Available is just as easily cut at the end of training camp as the putatively Best Player Available, and provides a bonus in the meantime to the female fan base of which the Steelers are so justly proud.

So with that, here are my picks for Rounds 4 - 7. At this point I’m going to assume any immediate needs were addressed in rounds 1 - 3, as my previous mock did.

No contest. While diligently searching for information on Hanna I found a great picture of him after a high school game, posing with his mom and not looking embarrassed about it.

He is durable, a hard worker, and has no character issues. He also has a smile to rival Hines Ward’s famous mug, and dark eyes to go with Heath’s dreamy blue ones. He is considered to be a sleeper prospect with "flashes of potential." Check out this potential: 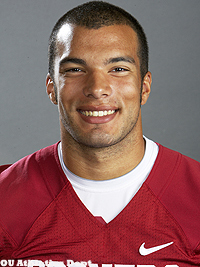 According to Walter Football, "Fletcher has a nice skill set with a combination of ideal size and quality speed." According to Momma Football, Fletcher would look great in a Steelers uniform. He has an ideal combination of looks and - well, looks. Unfortunately he has a few knocks against him as a player, as one might expect of a prospect who wasn’t invited to the combine and is unlikely to be drafted higher than the fifth round, but he seems like a good development prospect. And considering how well Carnell Lake has done with the young talent he was given last year, I think Pittsburgh would be an ideal place for Fletcher as well. 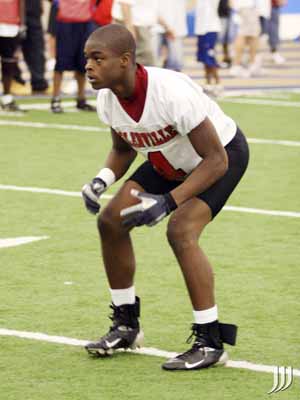 Tim Tebow is going to the Jets. This says it all. Obviously the NFL is becoming not just a passing league but a multiple passer league, and the Steelers need to keep up with this trend. They are letting Dennis Dixon walk, as far as any of us know, and while they have signed Troy Smith, there’s a need for more, and better-looking, QB depth. (Sorry, Mr. Smith. And Lefty...)

But he doesn’t bring just looks. Davis set an NCAA record last October by completing 26 straight passes to open a game. He also set a record for 36 straight completions over a two-game span. This breaks Aaron Rodgers’ college record set in 2004. The offense he ran had some designed runs included. Perfect! Start working on the wildcat, Mr. Haley! And speaking of perfect, check out the picture: 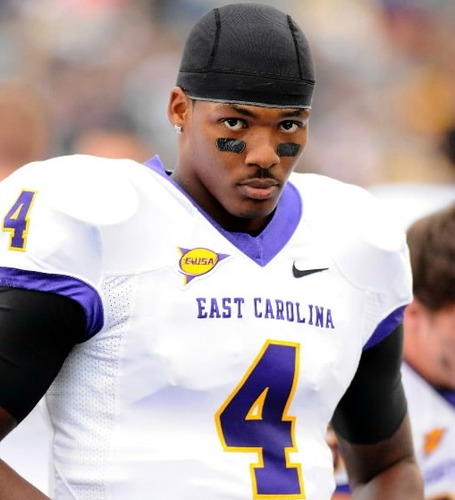 In footbally terms he holds the UConn career records for field goals (74), extra points (128) and points (349). He was selected for the All-Big East Conference First Team for the 2011 college football season. Character-wise, Teggart has one blot on his books—he was arrested as a sophomore whilst fighting with another member of his team. The other guy was a junior, and a linebacker. So although Teggart doesn’t lack courage, he may lack some sense. He might be willing to tackle if necessary, though, which is always a plus!

Although this picture doesn’t show his face, Google it, ladies. It is definitely worth a second look. This pic shows some of his other attributes: 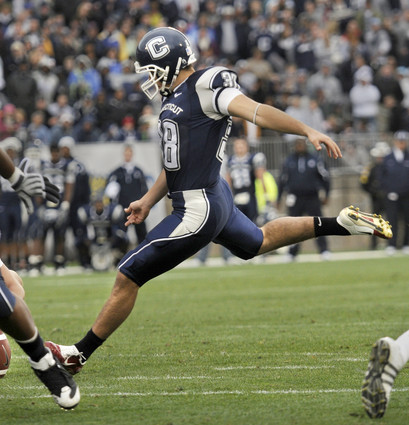 And here’s a final bonus pick. This assumes another team picks up Keenan Lewis, who was given a third-round tender. Both Curtis Brown and Cortez Allen progressed well last year and may be ready to move up into the number two and three slots. So instead of looking for another CB, I decided to take the BLA for the Steelers' second Round 3 pick, Mychal Kendricks.

Kendricks had a great combine and has been moving up the boards, but it didn’t take a great combine to demonstrate his BLA potential. "But we don’t need another OLB," you may moan. No? Well, then, why did Lawrence Timmons have to move outside for most of last year, thus reducing his effectiveness severely?

The buzz on Kendricks may have priced him out of the 3rd round, but a girl can dream, can’t she? Check it out: 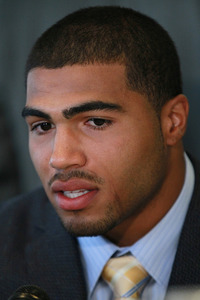 And that’s it for the moment. If things change radically in the next few weeks there may be an updated version, but if not, see you on April 26th!