Share All sharing options for: New Steelers Throwback Jerseys Should Stay Thrown Back

Early results from a WTAE-TV poll on the new Steelers jersey are in, and they aren't good, if you're trying to sell the latest Steelers throwback jerseys.

I abstained from voting because "Those are the most god-awful things I've ever seen in my life," or at least "you couldn't pay me to wear that jersey" weren't options.

I'm really not sure why I'm getting this worked up over it, but these are embarrassingly bad. It looks like a mix between a comic book henchmen and an imprisoned convict in a poorly colorized French movie from the 1950s. 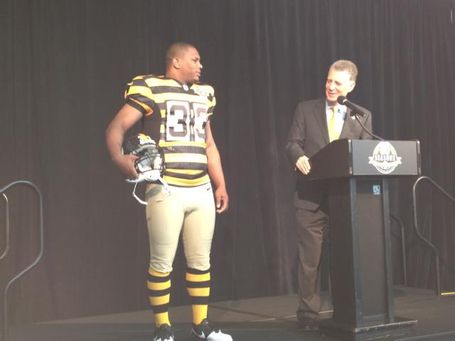 The photo is courtesy of WTAE, and it could be perfect photographic evidence for the most embarrassed Isaac Redman has ever been. Is this because he fumbled twice against Cleveland last year?

Don't think for a second it's a coincidence the team's second running back is the model. Having an established veteran put on an outfit that even fashion neophytes like myself can see wouldn't look good on any human being is probably against union rules or something.

The only positive thing I can see from these is it may give the Steelers' opponents motion sickness. Or perhaps the team they play against (please God do not let it be on prime time) will have the same reaction I did and go on a rampage, committing 20 penalties or something. I suppose it's possible they could play the Raiders with these stupid things on.

Mr. Rooney II, you failed royally in this pursuit. I could care less if these were the actual jerseys they wore in 1933. Fail. Epic, EPIC fail.