Share All sharing options for: The Steelers' "Young Money Crew" Is Money Indeed...

While working on an article about running backs (coming soon to a blog near you!) I ran across the following brand-spanking new article about wide receivers on profootballfocus (otherwise known as PFF.) In it they use one their so-called "signature stats," Yards Per Route Run.

Their #1 and #2 ranked receivers in the league aren’t a big surprise: that would be Victor Cruz and Jordy Nelson. The third receiver on their list is none other than our own Antonio Brown. Here’s what the fine folks at PFF have to say about him:

When you look at the Pittsburgh Steelers you can become enamored with the plays Ben Roethlisberger makes, the constant pressure the defense gets, or the vertical threat that Mike Wallace offers. If this year is anything to go by, a new weapon could be about to rival all of them, with Antonio Brown developing into one of the NFL’s most devastating receivers. He finished third overall after turning his 427 pass routes run into 1,108 yards and with more opportunities likely next year, it will be interesting to see just how high his yardage figures can go.

Brown wasn’t the only Steelers receiver to figure in their top twenty. Mike Wallace came in at #16, just behind Larry Fitzgerald, which is pretty good company!

In other AFC North news, Cincinnati’s A J Green was #18.

At the bottom of the list were some other names we can recognize:

And the very bottom of the class:

Although a lot of the top-ranked players are young, the ages vary a good deal, with the elder statesman being the seemingly ageless Steve L. Smith, who was drafted in 2001.

As I studied the list, I realized that an awful lot of the names in the upper tier were not 1st round picks. So I looked it up, and here’s how the top 21 on the Yards Per Route Run Ranking looks:

Here are the percentages: 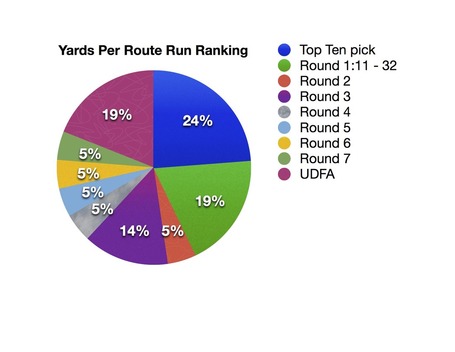 Although the majority of players were chosen in the first three rounds, well over a third of the receivers in the top 20 were chosen after round three, and 0% of the top five were first round picks. (Only Jordy Nelson was picked higher than Round 6!) Possibly all this means is low-round and undrafted receivers tend to be scrappier and more inclined to work for extra yards.

But the statistics in general would appear to affirm the Advanced NFL Stats contention: the top couple of players picked at a given position during a given draft are a lot better than the next tier. If you can't get one of them, you might as well take a flyer on a later round or UDFA player. This seems to hold true for almost every position, and certainly for the skill positions.

I don't know about you all, but it makes me hope all the more the Steelers can lock up Brown with a contract sooner rather than later!