The logical and presumptive statement "fast is faster" may prove to be misleading.

Tuesday, Nike and the NFL revealed the look of the new uniforms the 32 teams in the league will wear. Outside of showing an illustration of Steelers SS Troy Polamalu in which the six-time Pro Bowl player looks considerably more muscular, very little has changed.

Basically, there's a Swoosh on it. Outside of that, it'll stay the same. 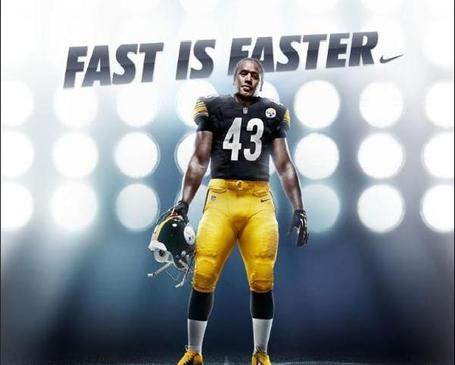 I look as much like Polamalu as the picture does (minus the shreddedness, of course), but it's comforting to see the uniforms weren't mangled with the league's hope to stay modern.

One advantage it could have is, interestingly for today's landscape, an increase in production for pass rushers.

Nike's flywire fabric is much more difficult to hold on to, which could prevent players from holding on by his opponent's jerseys. While every team's fanbase celebrates the future uptick in sacks by the respective members of their team who are obviously always held on every play, Bears LB Brian Urlacher joined the masses by declaring teammate, Bears DE Julius Peppers, is headed for greatness due to the jerseys.

The new jerseys did pique the interest of the Jersey Rules Committee, which has added this topic to its agenda for its kickoff meeting, scheduled for Twins home opening weekend at Target Field in preparation for Annual Jersey Day (July 24).