Share All sharing options for: Steelers CBs Corner the Market in FO Rankings

The Football Outsiders’ CB rankings just came out, and they were really interesting, at least for Steeler fans. Because, by gum, on every single metric they used there was at least one or even two Steeler cornerbacks in their top ten.

Let’s look at the numbers. In each category you see the players they ranked as No. 1, No. 10, any Steelers players on the list, and Philadelphia's Asante Samuel, who was consistently good in every category and provides sort of a benchmark. They included in the analysis all cornerbacks with at least 40 charted passes for the season. They note "[We remove all] passes marked as Hail Mary, Hit in Motion, Tipped at Line, or Thrown Away...and passes marked as Wide Receiver Screens." They are just looking at situations in which a cornerback was the primary man in coverage, and who could have been expected to make a play in the circumstances. The full article can be found here.

First up is Fewest Yards Allowed Per Pass: 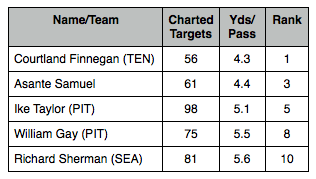 And finally, as the FO guys said, more for conversation than anything else, Yards After Carry Allowed:

Because I had the impression that the PFF (Pro Football Focus) numbers for our guys weren’t particularly good, I decided to make some comparisons. It turned out to be very interesting. Numbers, clearly, are subject to very different interpretations, depending on what one looks at. Let’s have a look at the PFF figures and then see whether we can work out where the differences are.

In the general ranking of cornerbacks on PFF, the story looks rather different. Ike Taylor appears as No. 41 (out of 66 ranked corners—this is filtering for the corners with a reasonable number of snaps.) He is beaten out by William Gay, who is No. 28 (Lewis doesn’t appear on this chart, as he has insufficient snaps to qualify). But let’s take a look at some of their so-called Signature Stats and see if they look any different. Once again I’m going to use Asante Samuel (who was No. 12 on the full PFF ranking) as a sort of benchmark, and give the first and last person for that ranking:

Coverage: According to PFF "Taking in account the number of snaps a defender spends in coverage [CS] is key to understanding their impact." The CS/Reception figure is how many receptions the CB allowed when he was the primary man in coverage for that snap:

Slot Performance: (Neither Samuels nor Ike Taylor had enough slot snaps to make it through the filter—Asante had 8 snaps in the slot, Taylor 61.)

So what does this all tell us? Why are the numbers so different? Well, first of all, the FO ranking is pass coverage only, which changes the equation in terms of comparisons to many of the PFF figures. But let’s just look at the PFF numbers for the moment.

Both Taylor and Gay look a lot better on the PFF Signature Stats than they do when just looking at the normal cumulative ranking. This is a good thing. The Signature Stats are a way PFF looks at the data, filtering for what really matters in a given position, or at least what they think really matters. They are looking for a way to determine who is actually effective at their position, as opposed to who is putting up a lot of stats.

Revis didn’t show up on the top ten of the Football Outsiders rankings at all. This was clearly a surprise to the FO author, who commented on this fact. He noted the second half of Revis’s season was not very impressive, possibly due to injury. Nnadami Asomugha, the man so many of us were hoping the Steelers would pick up in free agency last year, didn’t show up on the top ten either. He was roundly beaten by Asante Samuels in almost every category, including on the PFF stats (although he was No. 1 overall in Coverage.)

Does all of this merely show you can "prove" anything with statistics? Not exactly, although it does show you come up with greatly varying results according to what you are looking for. It is interesting that a very respectable website with no dog in the race, Football Outsiders, valued our corners quite highly, and when one digs into the PFF stats in more than a superficial way it supports the contention that both Ike Taylor and, in particular, William Gay played well last season. Which makes it all the more a pity Gay has departed for Pittsburgh West.

I can only conclude the Steelers FO and coaching staff believe they have more than adequate replacements ready to step up and make their mark. Steeler Nation awaits the results.