Battle of the (AFC North) Quarterbacks—How Do They Compare?

Share All sharing options for: Battle of the (AFC North) Quarterbacks—How Do They Compare?

Zachary Beard visited BTSC on Monday to give us the opportunity to "Ask a Ravens’ Fan" about their team, their offseason roster moves, and so on. Pixburgh Arn attempted to wangle some pictures of their cheerleading recruits, but the Baltimore Beatdown guys didn’t fall for that old canard.

Reading the BTSC questions and Zachary and AV23’s responses was really interesting, and gave me the idea for a series comparing players in the AFC North. As I’m fully prepared to admit, it’s likely my Steeler-colored glasses will bias me a bit toward the guys in Black and Gold, but I’m going to attempt to be as neutral as possible. I will compile data from the major sites and try to keep my own opinion out of it until the end of the article. Since each team will be likely to have 2012 draftees as starters in at least a few positions, I’ll use their college stats to compare them to the veterans. I’ll also give my ranking of the four teams based upon the information I’ve dug up. It’s probably baseless speculation, but after all that’s pretty much all we’ve got in the long, long days of June and most of July.

So let’s get started with arguably the most critical player on any team—the quarterback. We have two veteran QBs and two newbies in the AFC North, so the comparisons are tricky, but we’ll soldier on. And in case you're wondering about the picture heading the article, I decided to let the youngster take precedence over the grizzled vets, just this once.

One could well ask how meaningful comparisons between, say, Andy Dalton’s first season numbers and Ben Roethlisberger’s first season numbers would be. There was a discussion over that very sort of thing in the latest Mike Wallace article, "The Business End of an NFL Contract: Is Wallace Worth It?" The author’s argument for the value of Mike Wallace was based upon a comparison of Mike Wallace, Larry Fitzgerald and Calvin Johnson’s numbers from their first three years. Wallace, of course, compared very favorably. The difficulty with this sort of exercise, though, is this: nobody really knows what’s going to happen next season. This is certainly true of our QBs, but in the end it's all we've got if we're going to try to make any sort of projections.

Let’s take Ben Roethlisberger first. He is generally considered to be entering the prime of his career. Interestingly, this isn’t quite what his numbers seem to show. If you look strictly at the figures, he’s been rather streaky. Only once has he bested the 66.4% completion rate of his rookie year. That year was, ironically, 2009, the year the Steelers missed the playoffs after a five-game losing streak, during which they lost to such powerhouses as Oakland, Kansas City, and Cleveland. His 104.1 QB rating in 2007 is by far his best. Only in 2009 did he even break 100 again.

In 2006, his third year in the league, he was frankly not very good, throwing five more interceptions than touchdowns. But perhaps it looks a bit different when one recalls he was in a motorcycle accident and had an emergency appendectomy in the off-season. This proves a point—the numbers don’t tell the whole story. He followed 2006 with a career year in 2007, had a down year in 2008, an excellent year in 2009, and, looking strictly at the numbers, hasn’t been as good since.

Have a look at the trends. Everything is calculated so that higher is better. Thus I’ve calculated Attempts/INT rather than the more natural INT/Attempts. Also, I have extrapolated the figures into the same range for purposes of comparison. So, for instance, in 2007 about 8% of Roethlisberger’s attempts were touchdowns. The actual figures are in the table below the graph. 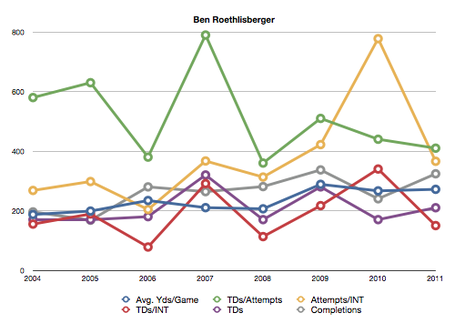 Looking at these figures, it is reasonable to ask whether Roethlisberger’s best days are behind him. I don’t believe they are, but only time will tell. The more important question for this exercise is how he compares to the other quarterbacks in the AFC North. Here are the stats for the other veteran QB, Joe Flacco of the Baltimore Ravens: 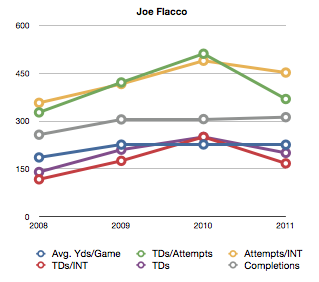 Clearly, Flacco isn’t nearly as veteran as Roethlisberger, having been in the league half as long. But it is really striking how consistent he is compared to Ben. Of course, his numbers are for the most part not as good as Ben’s. (Note the top line on the chart is 800 for Ben, 600 for Joe.) Comparing him to Roethlisberger’s first four seasons, his best QB rating, 93.6 in 2010, is better than Roethlisberger’s 2006 QB rating of 75.4, but as mentioned that was the year Roethlisberger wasn’t playing with a full deck, so to speak. In the other three years, the closest Flacco comes is 10 points below Ben’s numbers.

Comparing their two charts, the stat which stands out the most to me is touchdowns per attempt. Even Flacco’s best figure doesn’t match Roethlisberger’s worst. However, Flacco actually had more touchdowns than Roethlisberger in both his second and third year, so in the end it doesn’t matter how efficiently he did it.

After a 2010 season in which he improved in every category, 2011 was presumably a bit of a disappointment for Ravens fans hoping to see Flacco finally take his place as an elite quarterback. Here are the numbers:

Next up, Andy Dalton of the Bengals. Since he only has one season on the books, we can’t look at trends. But here are his numbers:

Since it is easier to look at a comparison, here are the same figures charted for Roethlisberger’s and Flacco’s rookie seasons. I’ve added one more—the QB Rating: 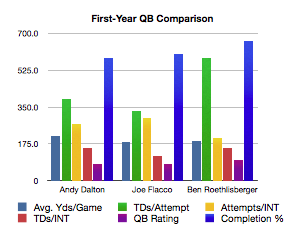 I don’t have the number on the charts, but both Flacco and Dalton had considerably more attempts than Roethlisberger— 428 and 516 respectively, compared to Roethlisberger’s 295. (However, both played 16 games to Ben’s 14, which is why I think percentages are more revealing than straight numbers.) Dalton threw three more TDs than Ben—20—and Flacco threw three less—14. Of the three players, Joe Flacco was the most careful with the ball and the least productive with it, if I may characterize it thus. Once again, numbers such as the completion percentage are extrapolated to make the difference easier to see. Here are the actual figures:

I thought it would also be interesting to see how some of the analysis sites rated our three QBs. Unfortunately, it isn’t possible to just line everything up, since each site has their own method, so here they are individually.

First, Pro Football Focus. Their ratings only go back to 2008, so it wasn’t possible to compare by career years, as I’ve done with the other stats. But it is still interesting to see what they came up with. They use a very complicated formula to assign a value to players at each position. In their system a zero means average play at the given position, so consequently a lot of players end up with negative numbers. Here’s how the players ranked for 2008, 2009, 2010, and 2011. (Naturally, Dalton is only ranked for last season.)

Next is Pro Football Reference. They assign something they call Average Value to each player for each season. Many players will receive a zero. For purposes of comparison, in 2004, Peyton Manning’s top-ranked year, he received a 21.

Finally, Football Outsiders. The ranking assigned is for all players at the position who had more than a baseline number of snaps. A lower number is better in this case, with #1 being who they consider the best player in the league. In I’ve given the numbers for Roethlisberger in 2004 - 2007, Flacco 2008 - 2011, and Dalton for 2011. (In case you’re wondering, Peyton Manning is #1 for 2004, Ben's first season. Drew Brees is #1 for 2008, Joe Flacco's first season, and Drew Brees is also #1 for 2011, Andy Dalton's first season.) The last column is the ranking for all three men last season.

Now, the wild card—the Cleveland Browns. I could give the numbers for Colt McCoy, but it seems Brandon Weeden is going to be the starting quarterback. Unless he isn’t. To be a bit less disingenuous, there will be a camp competition for the starting spot, but the strong expectation is, Weeden will win it. So the best I can do is a quick comparison of his college numbers with our other three starters. Here they are, year by year: 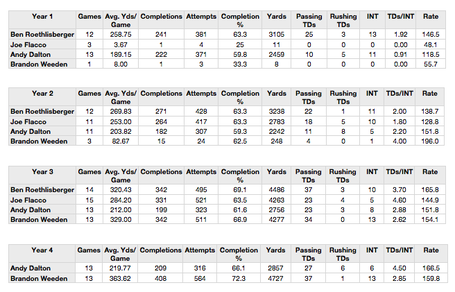 I tried making these into charts, but I think it’s actually easier to just look at the numbers in this case. Weeden didn’t get any appreciable amount of playing time until his third year, but once he did, his numbers look good. In fact, they probably look more like Ben Roethlisberger’s numbers than either of the others.

As we all know, it’s hard to say how college numbers will translate to the NFL. And for quarterbacks (as for most rookies) there is a pretty sharp learning curve. But Weeden also has career experience in professional baseball—he was a second-round pick for the Yankees. He never made it past a Class-A club, though (the High Desert Mavericks of the California League.) But at any rate, it might be harder to throw him a curve ball in the NFL. (Thank you very much—I'll be here all week...)

I thought about comparing the back-up QBs as well, but since we won’t know for sure who those are until after camp in most cases, and since it would be a whole lot of trouble, I decided not to bother. So, as usual, everything could end up looking completely different if one of the QBs sustains a significant injury. Unless that quarterback is Ben Roethlisberger, in which case he will probably play anyway. ("It’s only a flesh wound...") But, like last season, his numbers will probably tank, so let us fervently hope for better things.

Here’s my predictions, for what they are worth. (Remember, you get what you pay for.) I think Ben Roethlisberger will stay reasonably healthy behind his new improved offensive line and put up excellent numbers, possibly even as good as his 2007 or 2009 seasons. I think Joe Flacco will play well, especially with the new confidence he gained by helping get his team to the playoffs and almost to the Super Bowl. But I also don’t see his upside to be as high as the other QBs in the AFC North. I believe Andy Dalton will continue to show the Bengals got a steal in Round Two of the 2011 draft, and he will improve significantly, just as he did between his first and second year of college. This is partly because of his history and partly because he has more than just A. J. Green to throw to this season. Brandon Weeden is a big question mark, and will probably struggle. Not necessarily because he isn’t up to the job, but because the Browns haven’t addressed the WR issue. Since he only managed a single rushing TD in his entire college career, and since he's an old guy, relatively speaking, he’s probably not going to be able to pull a Tebow and just take the ball in himself on a regular basis.

Given all that, here is my entirely speculative and possibly homeristic ranking of the AFC North offense, based only on the quarterback position:

This may well change as we look at other positions, or if, heaven forfend, one of our starting QBs has a season-ending injury getting out of bed, desecrating a Terrible Towel, or whatever else these guys do during the offseason. Stay tuned for Parts Two through Twenty or so of the series, as I address each position. The series will probably be complete by this time next summer, if it continues at the rate it is going thus far.