Battle of the (AFC North) Offensive Tackles—How Do They Compare?

Share All sharing options for: Battle of the (AFC North) Offensive Tackles—How Do They Compare?

That's Joe Thomas on the right end of the photo. I don't know whether a giant leap into the air has any particular value during an NFL game, any more than Ziggy Hood's jump from a chair onto a 50" high box, but it is certainly festive afterwards.

In some ways, the previous three articles are beside the point until we look at the offensive line. Without a line to protect him, a quarterback like Ben Roethlisberger who likes to hold the ball seemingly forever spends a lot of the game on the ground. Without a solid interior line a runner like Ray Rice is a good deal less effective. This is the problem with trying to do analysis on a sport so dependent upon teamwork. But let's have a look at what we can tease out.

Because so many men are involved in the O line, I’m going to break it up and tackle the tackles first. The interior of the line will be the next article. But before I break down the tackles, I'm going to throw out the Football Outsiders Offensive Line rankings. They are separated into Run Blocking and Pass Protection. Since they are rankings, lower is better: 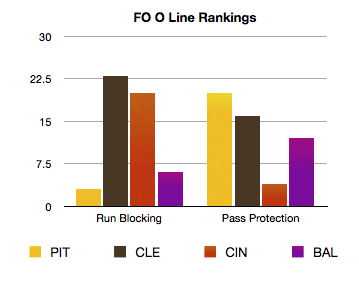 When you see how well the Cincinnati line did in pass protection, Andy Dalton's surprising rookie season isn't quite so surprising. When you see how poorly the Pittsburgh line did, Ben Roethlisberger's bum ankle isn't a surprise either. But the good numbers for run blocking has to make you question Rashard Mendenhall's pedestrian numbers a bit more. Looking at the Cleveland run blocking, maybe Peyton Hillis should get a bit more credit. Or perhaps the line was just over him. Mainly, given last year's results, it isn't shocking to see the line who didn't appear in the top half of the league in either category was on the team with the poorest record. And yet they have Joe Thomas, leaper extraordinaire, and an awfully good tackle to boot. But on to the analysis.

The Steelers' offensive line has been an offensive unit for quite some time now, and not in a good way. Multiple injuries in the past few years have not helped a line largely staffed with journeymen and career backups. Of course, it was staffed with journeymen and career backups in part because of injuries to starters. However, attempts to address the line were not particularly successful until the past few seasons. Since the end of the 2007 season, when Alan Faneca left in free agency, the following linemen have been drafted or picked up: 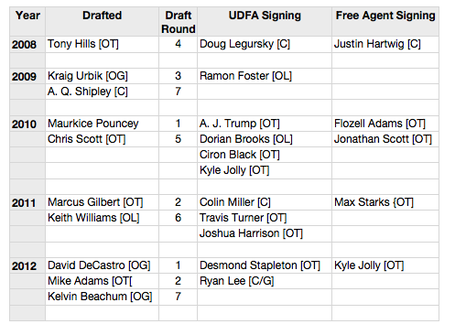 There’s probably one or two I’ve missed in there, but you get the general idea. Not a lot of them have stuck, and not a lot of the ones who did stick would be considered top-flight NFL linemen.

Flozell Adams was, of course, a critical stop-gap in the 2010 team, subbing for the injured Willie Colon, and Max Starks played a similar role on the other side of the line in 2011. Ramon Foster outplayed his UDFA status, particularly last season, as has Doug Legursky, particularly playing center.

But apparently 2012 was deemed to be the year in which the offensive line woes would be met head-on, and Colbert and Co. pulled the lever in both rounds one and two as well as round seven, signed two UDFAs, and brought back Kyle Jolly, who spent 2010 and part of 2011 on the Steelers practice squad. (he spent the remainder of 2011 on the Falcons’ practice squad.)

The general assumption is, Marcus Gilbert will remain at right tackle and Mike Adams will win the job at left tackle. A healthy (at least at the moment) Willie Colon is moving to guard, where many thought he was best suited anyhow. Suddenly the line has gone from a major weakness to a potential strength. At this point, though, it is only potential.

As far as depth goes, one thing the past two injury-riddled seasons has done has take the term "position flexibility" to a whole new level, and there are a number of players who are capable of covering essentially all of the line positions. They mostly haven’t covered them particularly well, of course, which is why no one jumped at them during the off-season.

Next up is the Browns. At left tackle the Browns have one of the best in the league, Joe Thomas. However, the right end of the line needed help, and they were aggressive in the draft, choosing Mitchell Schwartz at the top of the second round. Reports from mini-camp indicate he will almost certainly beat out Oniel Cousins for the job. Behind Thomas and Schwartz are Cousins and Jake Anderson.

In 2009 the Ravens moved up in the first round to draft Michael Oher. There was a tremendous amount of hoopla over the Oher pick because of the movie about him, "The Blind Side," based on the Michael Lewis book of the same name. I wept buckets through the movie. However, as a Steelers fan I have been immensely relieved Oher hasn’t, at least yet, turned into the All-Pro left tackle he was purported to be.

Oher began his rookie season on the right side but was moved to LT. Although it wasn't a particularly successful move, the coaches left him there for the 2010 season as well. But Oher was clearly struggling, so he was put back on the right end in 2011, where he plays much better. He is still somewhat of a penalty machine, though.

The Ravens signed Bryant McKinnie in 2011 to shore up the left end. McKinnie was a free agent after being cut by the Vikings, as he had, among other things, showed up at training camp at almost 400 pounds. After a series of other incidents indicating a poor attitude and even poorer work ethic, the Vikings had enough and cut him. The Ravens took a chance on him, and it has worked out well.

Behind Oher is Jah Reid, and McKinnie is backed up by Ramon Harewood.

Finally, the Bengals. Andrew Whitworth has held down the left tackle position, very credibly, too, since 2009. Andre Smith Jr. plays right tackle. Smith was named by Pro Football Focus as the most improved Bengals player in 2011. Behind Whitworth and Smith are Anthony Collins and Dennis Roland.

So how do they match up? We have two probable rookies, Mitchell Schwartz and Mike Adams, so let’s compare the college guys first.

Since linemen don’t have individual stats in quite the same way as receivers or QBs, I first compared their draft profiles. Both Adams and Schwartz were said to possess "ideal size" for an NFL tackle. (Adams is a couple inches taller, at 6’7", with slightly larger hands, wingspan, and so on.) Adams’ combine results were also just that little bit better than Schwartz in essentially every category. And yet Adams graded out below Schwartz (by ProFootball Weekly) because, as they said, "he lacks the mental makeup, toughness and consistency desired on the front lines and has clear bust potential."

I averaged the rankings for offensive tackles in the 2012 draft from Walter Football, NFL Draft Scout, Draft Countdown, Pro Football Scout, and ff toolbox. The rankings were closer in some cases than others, but in no instance did Schwartz rank above Adams. The average rankings were 4.8 for Adams and 9.8 for Schwartz. In other words, there was a reasonable consensus on Adams as being the fourth or fifth best tackle in the draft, and on Schwartz as the ninth or tenth. Here’s what Pete Prisco of CBS Sports said in his grades of the 2012 draft:

I actually have to applaud the Browns for this pick. He is a tough guy. Nice pick.

Yes, he has character concerns. But he's a heck of player. Worth the risk as a second-round pick. Nice move, Steelers.

The love for the Schwartz pick was scarcely unanimous, as many felt the Browns had passed on better players (including Adams) to take him. Time will tell which team, if either, screwed up their second-round pick. It makes the storyline for this season even more compelling, at any rate!

All of the other tackles have at least one year of NFL experience in their position. Here are some comparisons for the 2011 season. Marcus Gilbert had the smallest number of snaps, (832) Andrew Whitworth the most (1166.)

First, some figures from Pro Football Focus. They evaluated tackles based on a number of criteria. First, the overall ratings: 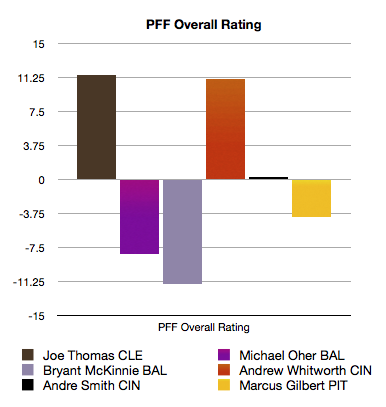 The top-rated tackle in the league, Philadephia's Jason Peters, received an otherworldly overall rating of 27.6. (The second-highest rating was 14.7) Joe Thomas ranked ninth, Andrew Whitworth twelfth, and the next highest is Andre Smith, a long ways down at No. 25. Gilbert was No. 31, Oher No. 36, and McKinnie No. 40. (Max Starks was No. 29, just for interest.) 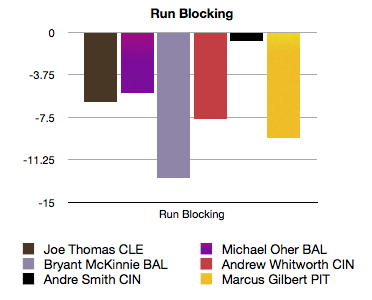 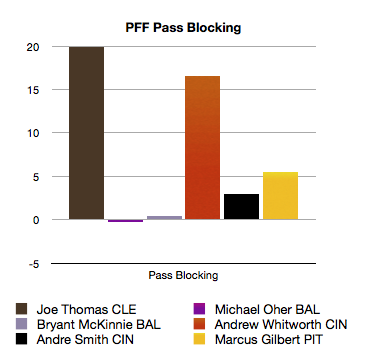 Pro Football Reference assigns an Average Value to each player, and they were quite close in the AFC North:

Joe Thomas was at the top of the heap, with a score of nine. Andrew Whitworth and Bryant McKinnie both scored a seven, and Andre Smith, Michael Oher, and Marcus Gilbert all received a six.

It's even more difficult than usual to rank the tackles team by team. Pittsburgh is a question mark right now. While Joe Thomas is clearly the best tackle in the AFC North, he will most likely be paired with a rookie (albeit a high-round rookie) at the other end. Cincinnati and Baltimore are more known quantities, and both were solid, Cincinnati more so than Baltimore. So, based on last year's performance, the tackles rate thus:

This could change dramatically, depending on how the rookies develop (or don't,) and it's somewhat moot until we look at the rest of the line, because as we saw last year Joe Thomas couldn't single-handedly compensate for poor play by the rest of the line. To be continued...