Share All sharing options for: Battle of the AFC North, continued: Tight Ends

This is the sixth post in the Battle of the AFC North series. Links for the other five can be found at the end of the article.

I thought about putting the tight ends into the wide receivers article, but in today’s league the tight end has taken on a whole new importance, so they get their own post. Let’s jump right in and look at the guys.

Since the Ravens drafted a TE I really wanted the Steelers to pick up in 2010, let’s begin with them. They drafted two of them in 2010, in fact, Dennis Pitta (who made it onto Momma’s Mock Draft for the Best Looking Players available) and Ed Dickson. Dickson was drafted in the third round, Pitta in the fourth.

Dickson began as the backup to Todd Heap, but when the team cut Heap last summer he had to battle Pitta for the starting job. Although he won it, towards the end of the season Pitta became a bigger part of the offense as Joe Flacco tended to look for him in third down situations. They combined for 94 catches and 943 yards.

Both are back for 2012, playing the last year of their rookie contracts. Offensive coordinator Cam Cameron plans to use the two in tandem in 2012, especially as there isn’t really an obvious third wide receiver. Behind them are a pair of UDFAs from Temple, Bruce Figgins and Matt Balasavage.

Jermaine Gresham was also drafted in 2010, by the Bengals. He was their first round pick at No. 21. In his rookie year he started 15 games and snagged 52 receptions, a franchise record for a rookie tight end. In 2011 he was even better, and was named to the Pro Bowl to replace Rob Gronkowski and Aaron Hernandez. 2012 draftee Orson Charles will join Gresham this season. Although many ranked him a top TE prospect and he was projected to go in the second to third round, a combination of a disappointing combine and a March DUI pickup dropped him to the fourth round. He was a bit of a surprise pick for the Bengals, who already had veteran Donald Lee and 2011 UDFA Colin Cochart, but the word is the coaches love Charles.

The Steelers’ No. 1 tight end is of course HEAATTHH Miller. Miller is an unassuming player who has spent the past couple of years blocking for Ben Roethlisberger, to the great detriment of his stats. (He is also, according to one of the cafeteria workers at the Steelers’ South Side facility, the nicest guy on the team.) Hope are high in Steeler Nation; Todd Haley’s retooled offense and the greatly upgraded offensive line should allow Miller to once again be used as the dangerous weapon he ought to be.

Last season David Johnson moved into Matt Spaeth’s vacated No. 2 spot, but this season the word on the street is, Johnson has officially been moved to fullback. The Steelers signed ex-Chief Leonard Pope, presumably to fill the No. 2 slot, and Weslye Saunders, last year’s No. 3 TE, is back. Saunders, a UDFA signing in 2011, will spend the first four games in front of his television, as he was suspended for an unspecified violation of the league’s PED policy. Pushing for his spot is 2012 seventh-round draft pick David Paulson, who has also done the occasional turn as a fullback. And we all know Mike Tomlin loves position flexibility. 2011 UDFA Jamie McCoy is still in the mix, so there should be a battle royal at training camp.

Do the Browns have any talented tight ends to help with the dearth of receiving talent? Well, last year veteran TE Benjamin Watson had the third most receiving yards on the team, despite missing the last three games of the season. (He was concussed during the December 8 game, which was a typical Steelers/Browns bloodbath.) As a member of the New England Patriots, Watson is known for one of the great hustle plays in NFL history, when he chased Champ Bailey down, not just from behind but from the opposite side of the field, and prevented an interception return for a touchdown in the 2005 AFC Divisional Playoff game.

2008 UDFA Evan Moore was tied with Joshua Cribbs in touchdown receptions for 2011, with four. This is the same number WRs Greg Little and Mohamed Massaquoi had—combined. Jordan Cameron, the Browns’ 2011 fourth-round pick, showed promise when brought off the bench at the end of the season, and in June head coach Pat Shurmer said "I feel like based on what he’s done here in the offseason, he’s positioning himself to make an impact for us."

Veteran Alex Smith is the other TE in the camp battle. A 2005 third-round draft pick by Tampa Bay, he has rattled around the league a bit before settling in Cleveland in 2010. The Browns resigned Smith in March, leading to reactions, as Jon @ DBN wrote on "Dawgs By Nature," ranging from negative to indifferent. The comments seemed to tend more towards the former.

It’s time to look at the numbers. We’ve got one rookie, the Bengals’ Orson Charles. Here is his scouting report, and the usual rankings:

Charles possesses a very athletic and physical build. He has a great burst off the line and uses his arms to disrupt defenders when coming off the line. Charles reaches his top speed quickly and frequently runs by safeties or linebackers on vertical or crossing routes. He is willing to extend his arms to make catches and has the ability to make difficult catches. Charles isn’t overly shifty with the ball in his hands, but he runs hard and is tough to take down. Sits into his blocks nicely and shows some tenacity when blocking.

While Charles gives effort in his blocking, he really struggles to latch on to a defender and can be overwhelmed at the POA due to a lack of power. As far as the receiving aspect of his games goes, he struggles with inconsistencies. His route running isn’t the cleanest, and will put easy catches on the ground too often.

Essentially all of the usual draft sites I perused (Mike Mayock, Walter Football, NFL Draft Scout, Draft Countdown, Pro Football Scout, and ff toolbox) felt Charles was the third-best TE in the 2012 draft. (Some commented it was a weak draft for TEs, and Coby Fleener was felt to be substantially better than any of the remaining TEs.) One site liked Charles better than Clemson’s Dwayne Allen. Overall Charles looks to be a solid pickup in a very solid draft for the Bengals this year.

Now for the veterans. This time let's begin with the Pro Football Reference Average Value. As I did with the O lines, I've given each player's career high as well:

I also looked up how the NFL website ranked these guys. Looking only at the AFC, they ranked thus: 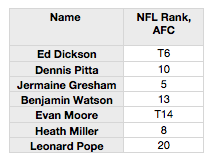 The NFL order correlates fairly well with the Pro Football Reference numbers. In case you are wondering, Rob Gronkowski is first. On every list. What can I say? He's from Pittsburgh.

But once again the nice neat ratings we have for the guys get thrown out the window when we look at the ratings from Pro Football Focus: 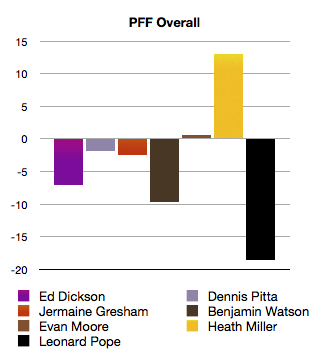 I presume it is because Pro Football Focus takes non-receiving stats into account, unlike the NFL rankings and Pro Football Reference. Whatever the reason, Heath Miller suddenly emerges as the King of Awesomeness that Steelers fans know him to be. (Did I mention he has beautiful blue eyes? Not that it matters. Much.) It's not because of his pass blocking so much, though: 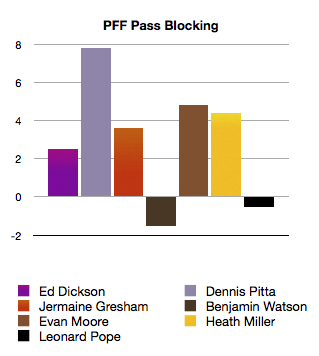 The truth comes out. He is the only TE in the AFC North, apparently, who can run block, or doesn't suck when he tries. 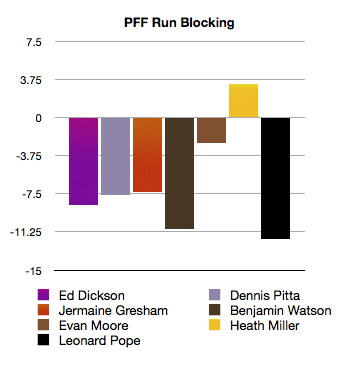 And one final nugget of information before the wrap-up—the drop rate. This is the percentage of what PFF deemed to be catchable passes thrown their way last season. Lower is better—Dennis Pitta's 0.0% is best: 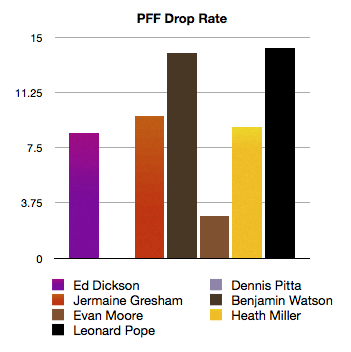 Just for interest, here's the same chart, but from the Wide Receivers post. It makes an interesting comparison: 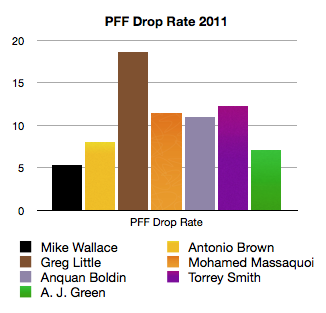 Well, on to the moment of truth. The Ravens have two young TEs who played well last season, although PFF was not very impressed with them. Admittedly they are not great run blockers. Given the age of the Ravens' offensive line, this might turn out to be a bigger factor than I am assuming it is at the moment. But I expect them to continue to improve this year, and to continue to provide solid play for BAL.

Despite Jermaine Gresham's Pro Bowl invite he doesn't appear from the numbers to be substantially better than the best of the AFC North TEs. He's just coming into his third year, however, and I suspect he still has a fair amount of upside, particularly as he and Andy Dalton work together for their second year. Although Orson Charles looks good on paper, he's still a bit of a wild card.

Heath Miller is a stud. There's no getting around that. But Leonard Pope is not, although he is a hero. If anyone is drowning in the wave pool, he's your man, but I'm hoping that having a much better QB throwing to him is going to help increase his production. And I'm hoping somebody shows him how to run block.

The Browns' TEs have promise, and provided much more of the offense last year than they ought to have done by rights. It won't help them to have yet another QB to deal with, but if Weeden turns out to be a big upgrade from Colt McCoy they will presumably benefit. Watson really needs to stop dropping the ball, though. Between him and Greg Little, that was a lot of missed opportunities last season.

Overall, I would say this is the most difficult position to rank so far. I don't see a clear No. 1 team. If pressed, I would rate them thus:

That's all for now. I'll start with the defense next week.

Here are the other articles in the series: