Battle of the AFC North: Safeties

Share All sharing options for: Battle of the AFC North: Safeties

This is the seventh article in the series comparing the AFC North players. Links to the previous six can be found below.

The picture at left shows something opposing teams have seen a lot since 2002, when Ed Reed premiered for Baltimore. The interception shown is his most recent one, against Houston in the first playoff game last January. In fact, other teams have seen this 57 times during his ten-year career. This is by far the greatest number of career interceptions among active players. Annoyingly enough, Reed is edging up towards Dick LeBeau's 62 interceptions made during LeBeau's distinguished 14-year career.

So with that depressing statistic (if you aren't a Ravens fan) let's look at the situation at safety in the AFC North.

T.J. Ward was the Brown’s 2010 second round pick; their first-round pick was stud corner Joe Haden. (Haden will get his due in the next article.) He started all 16 games of his rookie season. He started the first half of last season, but a sprained foot in early November ended his year. Ward and Haden are expected to be the anchor of the secondary in 2012. While waiting for training camp to begin, Ward spiced up the offseason with a run-in outside a nightclub which culminated in the police using pepper spray. I guess the players get bored too...

Eric Hagg, a 2011 seventh-round pick, was injured in training camp and sat out the first six games of the season. The 2011 FS, Mike Adams, signed with the Broncos after the Browns let him walk in free agency, and Hagg is currently listed as the starter. He will have to beat out Usama Young for the job, though. Young was the Saints’ 2007 third-round draft pick, and signed with the Browns in 2011. He was expected to be the starter in 2011 but never managed to beat out Adams for the spot. It should be an interesting camp battle.

Behind them is Ray Ventrone, perennial special-teams player, and a handful of camp bodies battling for a spot.

The Steelers have two pro-bowl safeties on their roster. Nothing needs to be said about Troy Polamalu, the 2010 Defensive Player of the Year, other than how much of the effectiveness of the Steelers’ defense has depended upon his being relatively healthy.

Ryan Clark is one of the better free-agent signings the Steelers have made in recent years. Both Clark and Polamalu, however, are approaching the Manginot Line for DBs - Troy is 31, Clark 32. And while Clark has been quite durable, he is not allowed to play in Denver because of a rare blood condition. This was a keenly-felt loss in last season’s Wild Card game, and he won’t be playing in the repeat match at the beginning of 2012 either.

Behind Polamalu and Clark are Ryan Mundy, Myron Rolle, Will Allen, Damon Cromartie-Smith, and Robert Golden. Mundy has played reasonably well in place of Clark, and appears to be a lock for the third safety slot. All the others are fighting for the one open backup space. It is possible the Steelers will put a fifth safety on the roster because of the issue with Ryan Clark (and for that matter, Troy Polamalu’s injury history.) Myron Rolle is the player I’m personally hoping has a breakout camp. He was a top pick in Momma’s Mock Draft back in 2010, and is an impressive and thoughtful person.

The Ravens have the best-known safety in the NFL aside from Troy, Ed Reed. In a battle for best hair, Troy is head and shoulders above Reed. As noted above, Reed wins the battle of career interceptions, by a long way. (Polamalu has 29 during his nine years in the league.)

Also a perennial Pro Bowler, Reed was the 2004 Defensive Player of the Year. If Polamalu and Clark are old, Reed is positively ancient, as he will be 34 when the season opens. Every year Steelers fans assume Reed is totally washed up, and every year he disappoints us. I don’t expect this year to be any different.

Bernard Pollard lines up with Reed. Pollard was drafted by the Chiefs in 2006, moved to Houston in 2009, and was picked up by the Ravens last season. Pollard is a Patriots-killer; he took out Tom Brady’s knee in 2008, Wes Welker’s knee in 2009, and Rob Gronkowski’s ankle in the 2012 playoffs. I would be surprised if Pollard visits Boston without taking a massive bodyguard with him. Or a team full of them.

Behind Pollard and Reed are Sean Considine and Christian Thompson, at least as of now.

Finally, the Bengals. Taylor Mays has a rather odd history. He was considered a top safety prospects in the 2010 draft, and was picked in the second round by the 49ers. Mays grew up in Seattle and was expecting to be drafted by the Seahawks, as apparently head coach Pete Carroll had led him to believe they would use their first-round pick on him. Instead they drafted Earl Thomas. Although he didn’t start for the 49ers at the beginning of the season, Mays won the starting SS slot for the remainder of the season. He was then somewhat inexplicably traded to the Bengals at the end of the season for a draft pick. Last season was a drop-off from the year before. A knee injury during the preseason limited his use in games to a mere 61 snaps in ten games. Will he return to USC form, which made him a top-ranked safety? I'm sure the Bengals hope so. And there is good reason for hope, with a proper off-season and a year of experience with the Cincinnati system.

Playing next to Mays is Reggie Nelson. A first-round draft pick for the Jaguars in 2007, Nelson was traded to the Bengals in 2010 in exchange for a cornerback. He made the Jaguars sorry they traded him, I presume, as he returned an interception 75 yards for a touchdown against the Seahawks last October. A free agent at the end of the season, the Bengals signed him to a four-year contract.

Backing up Nelson and Mays are Jeromy Miles and George Iloka.

We have no rookies, which is pretty exciting for me, as I don’t have to make guesses about how they will do at the NFL level. So let’s compare everybody straight up. I’ve also included the principal backups for PIT and CLE. We know Ryan Mundy will start at least one game next season, unless he unexpectedly gets beat out at camp, and Usama Young still has a chance to win the job in camp (or at least he would if I worked for the Browns and was looking at the numbers...)

Here are the relevant NFL stats. The abbreviations are the usual: GP = Games Played, Comb. T is all tackles, solo or assisted,Total T = solo tackles; Solo T/G is the average number of solo tackles per game, PDef is Passes Defended, and so on:

How you view the numbers depends on what you're looking for. Want a ball hawk? Surprisingly, Reggie Nelson had the most interceptions. Looking for tackles? Ryan Clark had the most, both on average and total. Want someone to shake up the opposition? Bernard Pollard is your man. Just ask the Patriots. So now let's see what some of the stats geeks make of our guys. First, the Pro Football Focus numbers. This is their overall rating; higher is better: 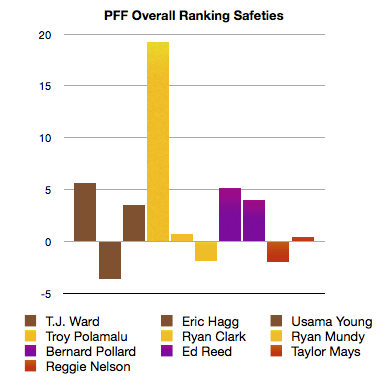 The AFC North can take great pride in their safeties. The PFF rankings are out of 168 safeties ranked. (Since neither Ryan Mundy nor, more problematically, Eric Hagg had enough snaps to make it into the 86-man list of principal starters, I had to look at all ranked safeties to find them.) However, in the 86-man list, seven of the eight starters made it into the top third of the league, and Mike Adams of Cleveland was also in the top third before being injured. (The rankings are: Polamalu, 1; Ward, 9; Pollard, 10; Reed, 14; Young, 16; Adams, 21; Clark, 25; Nelson, 28.)

Next let's look at the Pro Football Reference Average Value and see if it looks similar to the PFF evaluation. Since there are lots of veteran players I've also given their career high so far, and the year it was attained: 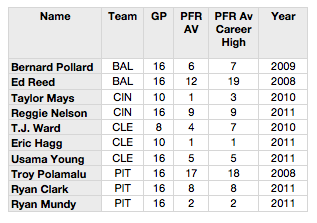 As usual there is a lot of divergence between the evaluations by the two sites. I can't use Football Outsiders as a tie-breaker, because they don’t rank safeties (or even defensive backs as a whole) separately from the overall defense. So I checked out Advanced NFL Stats, and here are their rankings—lower is better. Hagg and Mays didn't appear on their list, because of insufficient snaps: 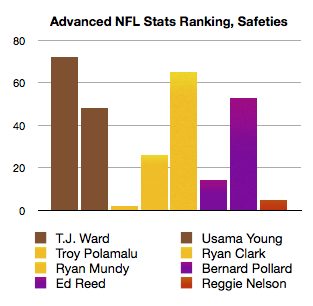 Well, now for the tough part. I hate having to commit to a ranking, but in for a penny, in for a pound.

Cleveland first: T.J. Ward had a great season until he was injured, and I presume a foot sprain should have long ago fully healed. He was considered the second-best safety among the guys we're looking at by PFF, although neither PFR nor Adv. NFL Stats were sold on him. Unfortunately Eric Hagg is an unknown quantity outside of Cleveland. I presume the coaching staff must know something I don't (shocking thought,) because both PFF and PFR value Young much more highly.

The Steelers have the otherworldly Troy Polamalu and the very proficient Ryan Clark. If one were to assume they will both be healthy one would have to conclude they are the best safety tandem in the AFC North. Unfortunately, Polamalu's injury history (due in no small part to his total disregard for his own personal well-being) makes it all too possible he will miss time next year.

Ed Reed is, without a doubt, one of the best safeties to ever play the game. However, there is also no doubt his production has dropped off in the last several seasons. He's still substantially better than the average bear safety. (That's "bear", not "beer" : ) Bernard Pollard is scary. In a good way, if you're a Ravens fan.

Cincinnati has the very impressive Reggie Nelson, and Taylor Mays, while he didn't impress last year, has the pedigree and, presumably, the ability to be much more than he showed.

I fully expect these rankings to be irrelevant by the end of training camp, but for what it's worth here they are, based upon last year's production:

Depending on whose rankings you look at, one could make a case for Baltimore edging out Pittsburgh on average, and for Cleveland being right up there with Baltimore and Pittsburgh if you assume Usama Young is the starter. And of course Taylor Mays might live up to the hype prior to his draft and blow everyone else away. That, as they say, is why they play the games. I, for one, can't wait! Next up, cornerbacks.

Here are the other articles in the series: