Battle of the AFC North: Cornerbacks

Share All sharing options for: Battle of the AFC North: Cornerbacks

This is the eighth article in the Battle of the AFC North Series. Links to the other seven can be found at the end of this article.

Pity the poor cornerback. If he’s doing his job well enough, nobody throws at him, and other defensive players get the glory, unless his name is Darrelle Revis. If he is doing a workmanlike job 95% of the time, the play everyone will remember is the one where he got beat. Just ask Ike Taylor. As he told Ralph Paulk of the Tribune-Review,

"Your memory has to be super short when it comes to playing cornerback," a sometimes-stoic Taylor said. "If not, you won’t be here. What people remember last is who got beat."

Since he got mentioned in the article about safeties, let’s begin with the Browns and Joe Haden. Haden is the guy making the tackle in the picture at the top, and veteran S Mike Adams is the guy chewing on Kellen Winslow's ankle.

Haden, the Brown’s 2010 first-round draft pick, was not the starter until the tenth game of his rookie season, and yet he led the team with six interceptions. As so often happens, he assumed the next season would be twice as good, predicting double-digit interceptions. While he played more than respectably, his season total for interceptions was zero. Nonetheless, Haden is a lock for one corner.

Sheldon Brown is the presumed starter on the other side. Brown is also 33, and one would assume he's lost a step or two. But at least according to Pro Football Reference his play last season matched his best seasons. He is in a camp battle with 2011 fifth-round draft pick Buster Skrine and undrafted veteran Dimitri Patterson, last seen on the Eagles before Cleveland signed him.

The Bengals are looking a little moth-eaten around the corners at the moment. Leon Hall sustained an Achilles injury during the second half of last season, and was unable to participate in OTAs or mini-camps. Nate Clements is is nursing an abdominal strain. 2012 first-round pick (at No. 17 overall) Dre Kirkpatrick has a leg injury which will keep him out for at least six weeks.

However, things are looking up; Hall passed his physical at camp and is cleared to practice. It is a big lift for the Bengals, as the effectiveness of their secondary suffered a big hit after Hall went down for the season. JungleJohn from Cincy Jungle commented Leon Hall looks really rusty in training camp. but this is not too surprising for someone who hasn't played for about 10 months at this point. Also in the mix are Terence Newman and Adam "Pacman" Jones, and they may see the field a lot more than one would expect, given the injury situation with Kirkpatrick and the age of Clements, who debuted in 2001 and is definitely on the wrong side of 30.

The corners for the Ravens are both young, but don’t overlook them! Jimmy Smith was the Ravens’ 2011 first-round draft pick, taken at No. 27. An high ankle sprain during the first kickoff of the opening game of the season (the Game That Must Not Be Named) sidelined him for the first six games. As soon as he was able Smith was slotted back into both special teams and defensive packages, and while he was inconsistent, when he was on he was really on. He was mentioned by Aaron Schatz of Football Outsiders in his "AFC's Small Sample Size All Stars" article for ESPN:

In the "Football Outsiders Almanac 2012," we rank cornerbacks in our charting stats if they have at least 40 pass targets or eight games started. As a rookie, Smith had just 31 targets and two games started. If he had qualified for our rankings, he would have come out with the best success rate in the NFL, 68 percent, and his 6.1 yards allowed per pass would rank in the top 20. He is a work in progress -- particularly having trouble against Malcom Floyd in Week 15 -- but the talent is obvious. He'll be a starter for Baltimore on opening day.

Lardarius Webb, in the meantime, continued to show he deserved the starting spot. In fact, he showed he was the best corner in the locker room, by a long shot. Webb got a shiny new contract this offseason. Last year’s starting corner across from Webb, Cary Williams, is a backup, along with Corey Graham.

Ike Taylor is another one of those Pittsburgh anomalies. Is he a shut-down corner, at least if you ignore the last play of the Wild Card game? Or is he terrible? It all depends on who is doing the analysis, apparently, as you will see when we get to the stats section of the article. Taylor is one of those players who is viewed very differently by different analysts. Football Outsiders likes Ike: in Aaron Schatz's Best Cornerback Charting Stats 2011 article, he and William Gay were the only two AFC North CBs to appear on their Top Ten Cornerbacks in Yards/Pass, 2011. (Taylor was No. 5, Gay No. 8.) He and Cleveland's Dimitri Patterson were the only two AFC North corners on the Top Ten Cornerbacks in Success Rate, 2011 ranking, at Nos. 7 and 8. There were three AFC CBs on the Top 10 Cornerbacks in YAC Allowed, 2011 ranking. No. 1 was Keenan Lewis, and Leon Hall and Ike Taylor were Nos. 9 and 10, respectively. Taylor, Asante Samuel of Philadelphia and Richard Sherman of Seattle were the only corners to show up as a top ten in all three categories. Not bad company...

The question on everyone’s lips is, who lines up in the opposite corner? The oft-vilified William Gay played that spot last season, and played it well, and it will be interesting to see how he does in Pittsburgh West. The heir apparent to the spot is Keenan Lewis, who is predicting a pro-bowl season for himself in 2012. The value of such predictions can be seen by reading about Joe Haden.

Lewis is going to have to win the starting job fair and square from two impressive 2011 draftees, Curtis Brown and Cortez Allen. Brown was the special teams leader in tackles, despite missing the last four games of the season. Allen was slotted into the defense in dime packages and played very well—well enough to take Aaron Hernadez out of the equation during the Steelers/Patriots game. The slot is Lewis’s to lose, but he could lose it rather easily if he doesn’t give it everything he’s got.

I’m going to cut myself a break and not run the college numbers on Kirkpatrick, since he almost certainly won’t see the field for a while; the fractured bone in his knee will likely keep him out of both camp and the preseason. Given the experienced depth at corner, I wouldn’t assume they would rush Kirkpatrick onto the field early in the season. So let's begin with the NFL stats:

Neither Smith nor Lewis were starting corners last season, and Leon Hall missed almost half the season, so their raw stats aren't entirely indicative of their true value. 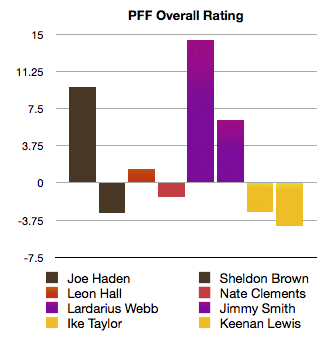 How about those Ravens? As will surprise few people who paid attention to AFC North games, Webb was highly regarded by PFF.

Here are the Pro Football Reference Average Value numbers, with each players' career high and when they achieved it. In the case of the veteran corners, they each hit the career high number more than once, sometimes in widely-separated seasons, with the exception of Leon Hall, who has never again sniffed the heady heights of 2009: 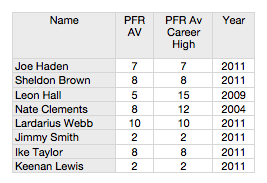 Once again we have a big divergence in the opinion of the analysts. Three corners who certainly did not impress the PFF guys, Sheldon Brown, Nate Clements, and Ike Taylor, were well-thought of by the PFR guys. So once again we'll look to Advanced NFL Stats to see if we can find any correlation. This is a rating, so lower is better: 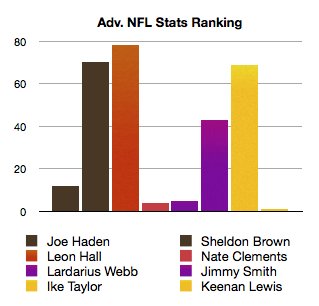 If you're wondering why you almost can't see Keenan Lewis on the chart, it is because he was ranked No. 1. Yes, No. 1, right above Darrelle Revis. You could have knocked me over with a feather. Interestingly, their three least favored CBs were three long-tenured veterans, but they loved the longest-tenured of all, Nate Clements, who debuted for Buffalo in 2001.

So what do we make of all this? If you go with the PFR ratings, the order is:

If you go with the PFF ratings, the order is:

If you go with the Advanced NFL Stats rankings, the order is:

My personal feeling, based upon the upside of Jimmie Smith, the uncertainty about the second corner spot in Pittsburgh, and the age and injury situation in Cincinnati, is this:

As always, this could change in a moment. I don't really feel Cleveland, Pittsburgh and Cincinnati are very far apart, and Baltimore might find their supremacy challenged by any one of the other three teams, depending on the development of the young guys in line. But for now, MaLoR, enjoy your moment in the sun : )

To check out the other articles in the series, click on the links: