James Harrison and the Apocalypse: Should We All Panic Now?

Share All sharing options for: James Harrison and the Apocalypse: Should We All Panic Now?

No one questions Harrison's toughness and passion for the game. He missed only one game from 2007 to 2010, and he plays with an old-school style that often gets him in trouble with the NFL. But this lingering issue with his knee makes you question his availability for the opener and his effectiveness for the season.

After quoting Harrison's agent, Bill Parise, who said he was in better health than he's been for three years, except for the knee, the frequently annoying Mike Florio commented:

Last time we checked, the knee is a pretty important joint. And as James gets deeper and deeper onto the wrong side of 30, his body won’t respond like it used to.

Even for a guy on the right side of 30, Parise’s timeline seems more than a little optimistic. So Harrison will start practicing less then three weeks before the opener, he’ll get surgery if the knee still swells up, and he’ll be ready to play by September 9, despite no meaningful training camp or preseason?

In the end, Parise may not want Harrison to be healthy before Week One. If he passes a physical and thereafter doesn’t get injured, the Steelers could (not will, could) decide to save $5.565 million, if they think the defense will be fine without him.

So is this it? The Steelers are going to cut James Harrison, no one will get to the opposing quarterbacks, and the Steelers will descend into their destined mediocrity. Or, perhaps, we should all take a deep breath and look at what happened last year without Harrison.

Although Harrison played in the season opener (and indeed in the first four games) he wasn't really playing up to his usual standards at first. He played in 11 regular season games in the end. (One of the ones he didn't play was, as Steeler Nation remembers with bitterness, his suspension for the hit on Colt McCoy.)

The previous season he played in 16 regular season games. A back injury, either sustained or exacerbated early in 2010, severely reduced his effectiveness during the season until he learned to manage the pain and play through it. As Jamison Hensley says, no one questions his toughness, and no one who has ever dealt with a similar back injury to Harrison's can even imagine how he played at all in 2010, much less played at the level he did.

It is fascinating to compare the two seasons. Here is the way Pro Football Focus rated him in each game: 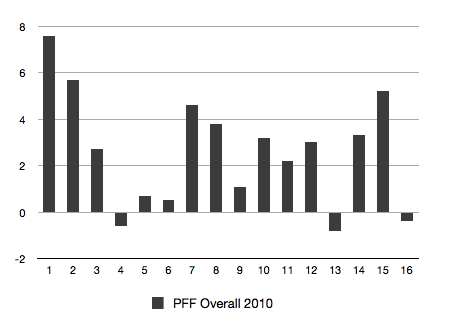 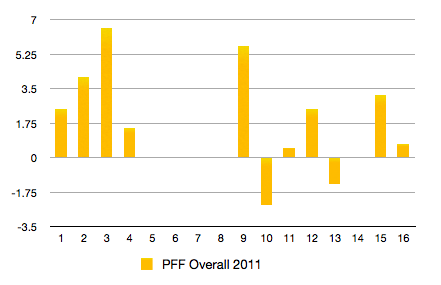 So are we looking at a player in an age-related decline, or merely a player struggling with injuries which may (if you believe his agent) or may not be almost completely resolved? (Obviously these categories are not mutually exclusive.) Let's look at two more sets of numbers: 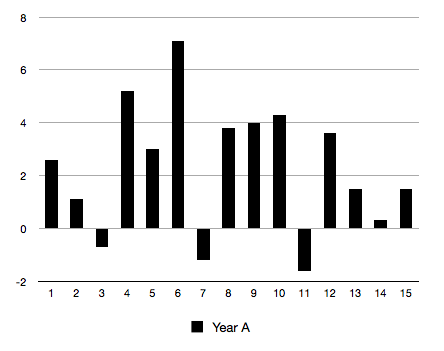 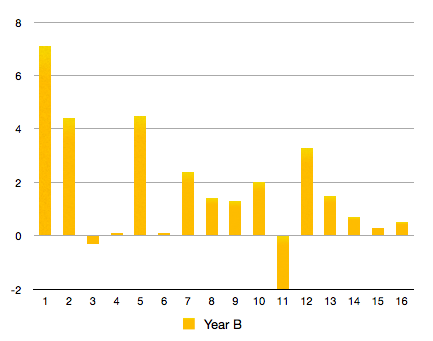 The main point I'm getting at, though, is if you looked at just 2008 and 2009 you could easily conclude the poorer performance in 2009 was due to age-related decline. But then, despite being in intense pain for much of 2010, he came back with a great season. This isn't to say age-related issues are not going to reduce his effectiveness soon, if they haven't already. But I think it would be premature to conclude they have been a significant factor in the last year. And if his agent is correct about how Harrison feels, other than the nagging knee, it is reasonable to assume he won't play the whole season, but will make a significant contribution when he does if played with discretion.

Because one thing I notice from the 2011 numbers, which may be merely a coincidence because of the small sample size, is Harrison's best games were followed by games in which he was substantially less effective. If I were the coaching staff, I would consider playing Harrison, once the knee is healed, either for very limited snaps in alternate games, or even only in every other game, more or less. It would certainly make an interesting experiment.

This isn't the only point I wish to make, though. It is worth noting the four games Harrison was out last season were all wins, and the first game he was back—the second Baltimore game—was a loss. Not to say the team doesn't miss him, but clearly the team was, at least last season, capable of playing winning football without him. Furthermore, Harrison's two worst games last season were actually team wins, although the first was just barely a win and the second not nearly as big a win as many thought it should have been—the game vs. Kansas City (final score 13-9) and the first Cleveland game (final score 14-3.)

And finally, note his backup was none other than Jason Worilds, who started seven games last season. It isn't like we had someone last year who is now gone in free agency, although admittedly Lawrence Timmons was playing OLB a lot of the time, which almost certainly won't happen this season unless things are a lot worse than they now look at OLB.

And Timmons did not play well at OLB. When you look at PFF, who splits their stats by position, Timmons played reasonably well (although certainly not brilliantly) at ILB, and wretchedly at OLB. In fact, he was almost the worst-ranked 3-4 OLB in the league. I can't help but think we would be far better off with an effective Timmons at ILB and some of the youngsters at OLB for significant snaps, allowing James Harrison sufficient time to heal and rest.

So, is the sky falling, even if Harrison is out for a significant amount of time? Probably not. As my earlier article notes, Jason Worilds performed well in place of Harrison and/or Woodley. (Of course, it would be more comfortable at the moment if Worilds were off the PUP list and practicing.)

While the Steelers may not be a particularly dominant defense without a healthy Harrison and Woodley on the field at the same time every game, or for every snap of every game, it was, under those same circumstances, still the top-ranked defense in the league last season. This was, I believe, in large part because of the contributions of the much-maligned corners and their new position coach, Carnell Lake.

If they continue to play well, we may see something of an evolution in the Steelers' defense—a shifting of the emphasis on certain position groups to create the havoc Dick LeBeau likes to wreak. We may see a somewhat different use of the D line, especially with so much young blood replacing what was mainly an aging group of veterans, and different schemes for the secondary. Until I actually observe the sky falling—not the occasional systemic failure in a single game but a week-after-week drubbing being given to our fabled defense—I am going to continue to believe the sky is staying right where it belongs.